Japan is an extremely popular and interesting country to visit.  People are traveling here every year in search of fresh sushi, train rides, fascinating traditions, and eccentric pop culture. Japan offers great ways to travel to its many islands by the ferries, buses, and railways. The culture and history are one of the most original and interesting. So different from Western culture giving you a great insight into other ways of thinking and living. Possibly why we are fascinated with Japan. And in 2020 there is the Olympics in Tokyo. 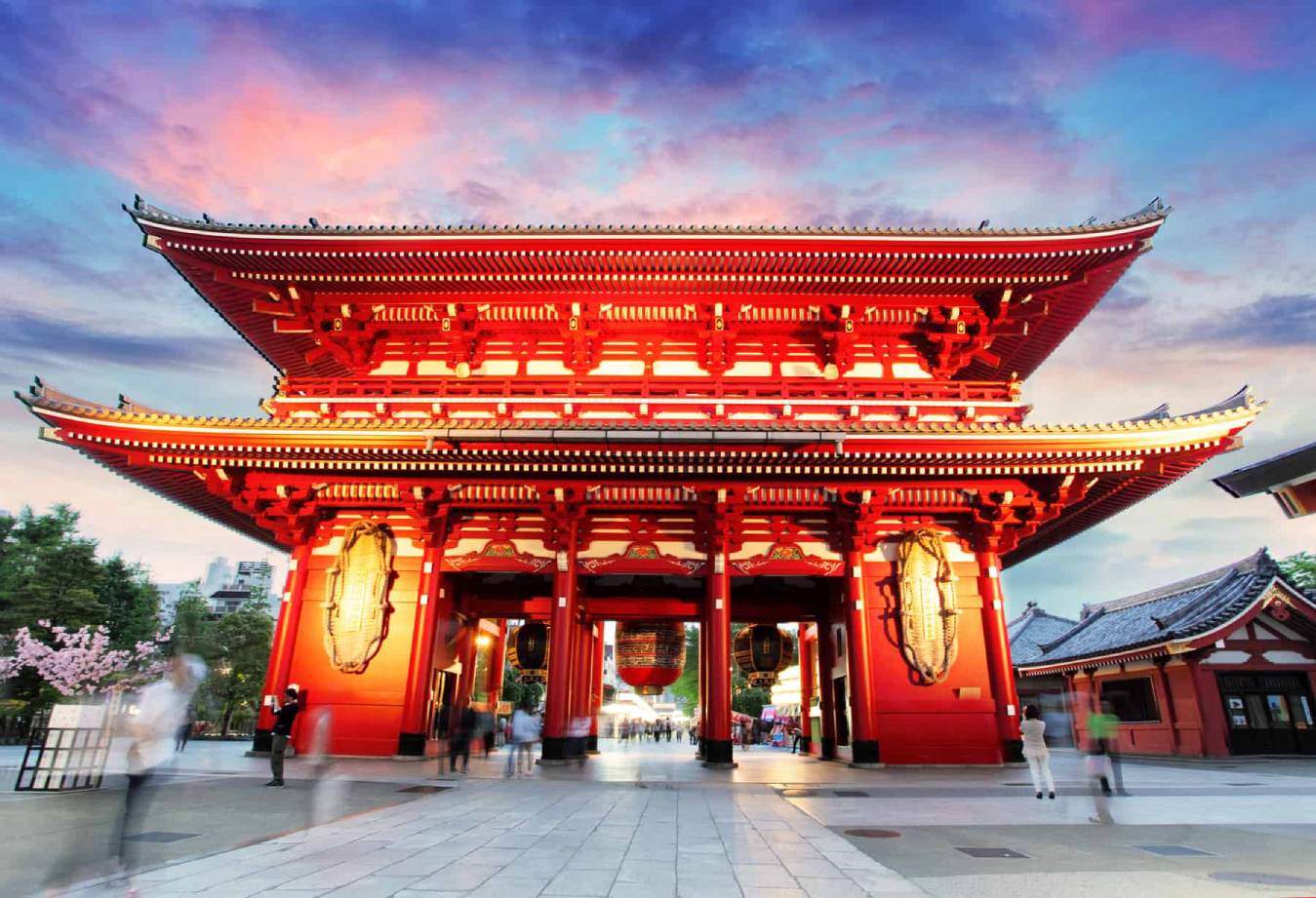 You can go and have a look at the Ainu culture in the snow cold northern islands of Hokkaido and the ancient places in Kyoto. Shikoku offers many temples where people often like to make pilgrimages. And Hiroshima which offers the quiet and peaceful streets which you can stroll leisurely or the Ryukyu culture of the tropical islands of Okinawa. Or you can have adventures on the busy streets of Tokyo among the buzzing lights.

Japan is welcoming, interesting and peaceful. You can enjoy a lot of very different places here with friends and family. Take a look at the top places in Japan to see. 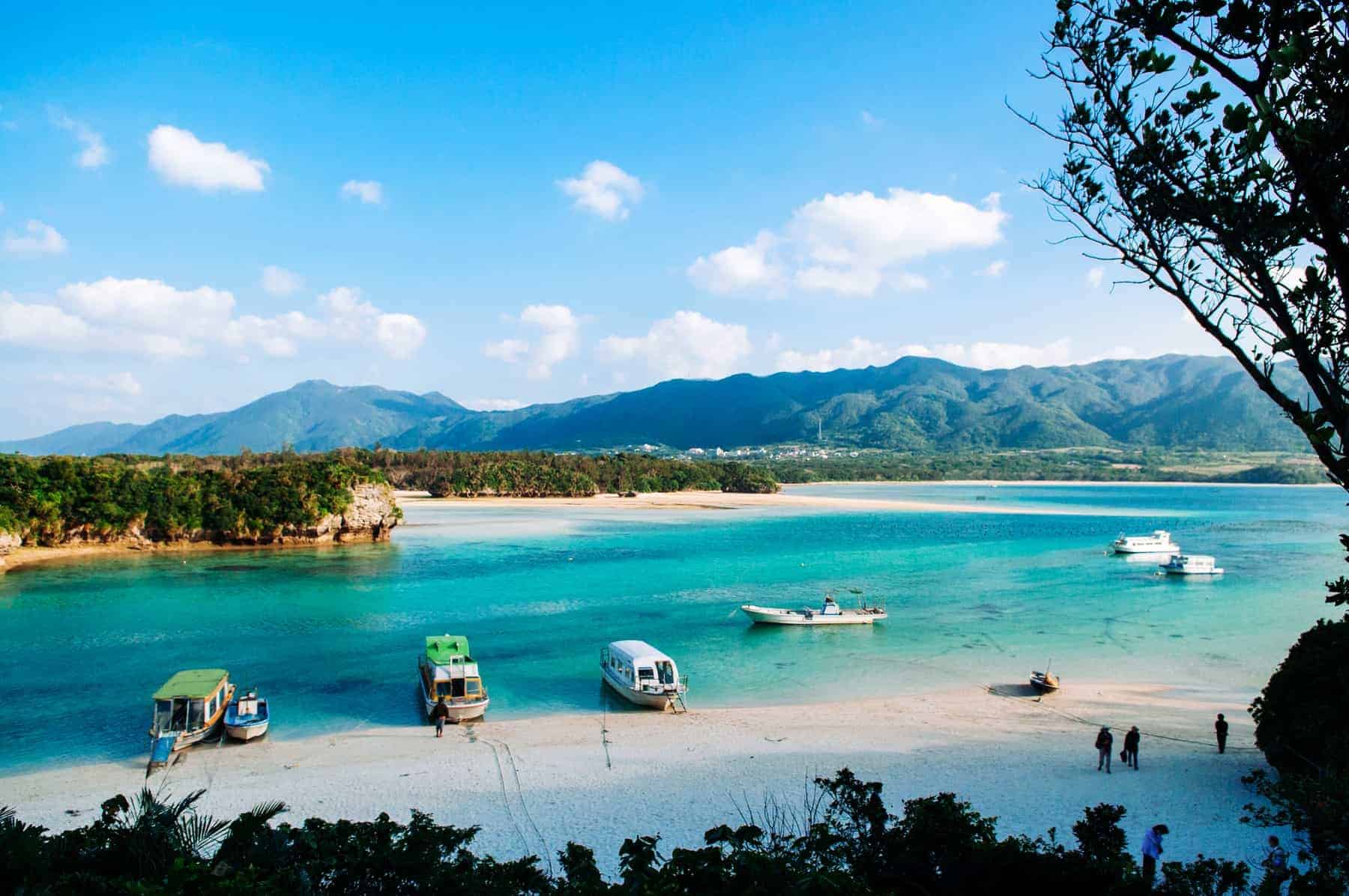 Ishigaki is one of Japan’s amazing beaches located in the West Okinawa and is an amazing start if you want to explore the islands in Japan especially those in Yaeyama archipelago. These are some of the most beautiful beaches in Japan and is popular among families as they are not protected unlike those at Fusaki and Maezato. Ishigaki is located almost 2000 km towards south of Tokyo and doesn’t have shrines like the other cities but it showcases more of an adventurous streak. This offers a happening nightlife for the visitors after an adventurous day full of beachcombing, water sports and climbing Mount Nosoko. 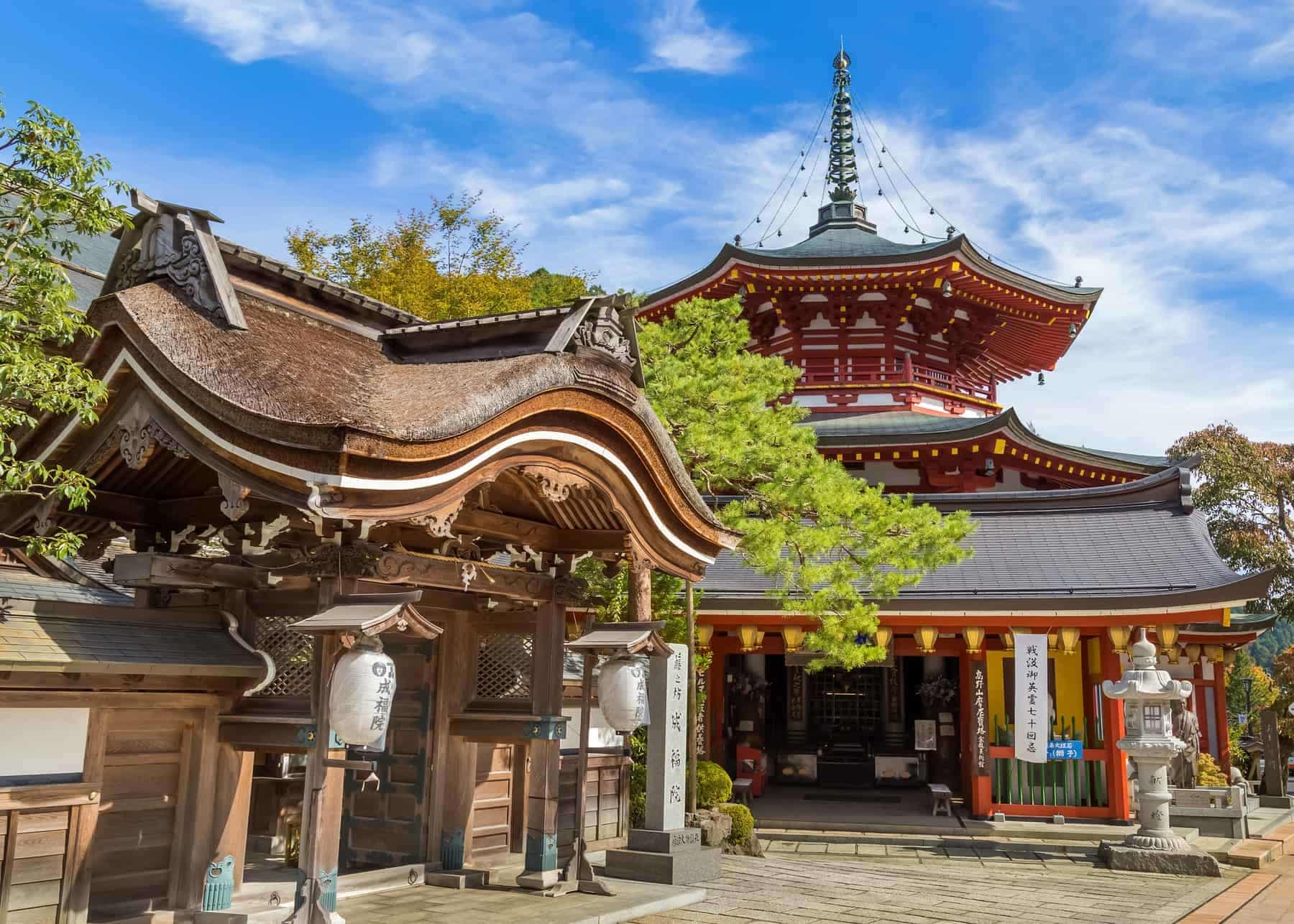 Koyasan is also called Mount Koya and it is one of the most important places in Shingon Buddhism. This mountain remains as the headquarters for the people in this variety of Buddism. There is a temple too that is sacred among the people who follow the teachings of Kobo Daishi. This is a mausoleum for Kobo Daishi and the pilgrimage of Shikoku 88 temple starts from here too. It is an amazing time and place for tourists to check out the monk’s life and imagine how it was. You are allowed to stay here overnight to have a richer experience.

Pond and tea house in Kenrokuen, a Japanese garden in Kanazawa, Ishikawa prefecture

Kanazawa, if you want to see authentic samurai and geisha houses

If you are looking to explore this ancient city of Kanazawa dating back to the mid-19th century, then get ready to learn a lot about Japanese history and culture. During the 19th century, Kanazawa was the fourth largest city of Japan and was equipped with a grand castle and a beautiful garden. To this date, the city relishes in its arts and culture. It has attractive old towns that have escaped bombing from the World War II and most of the inner-city areas like Nagamachi’s samurai’s houses and geisha teahouses remain intact that are surely a joy to see. 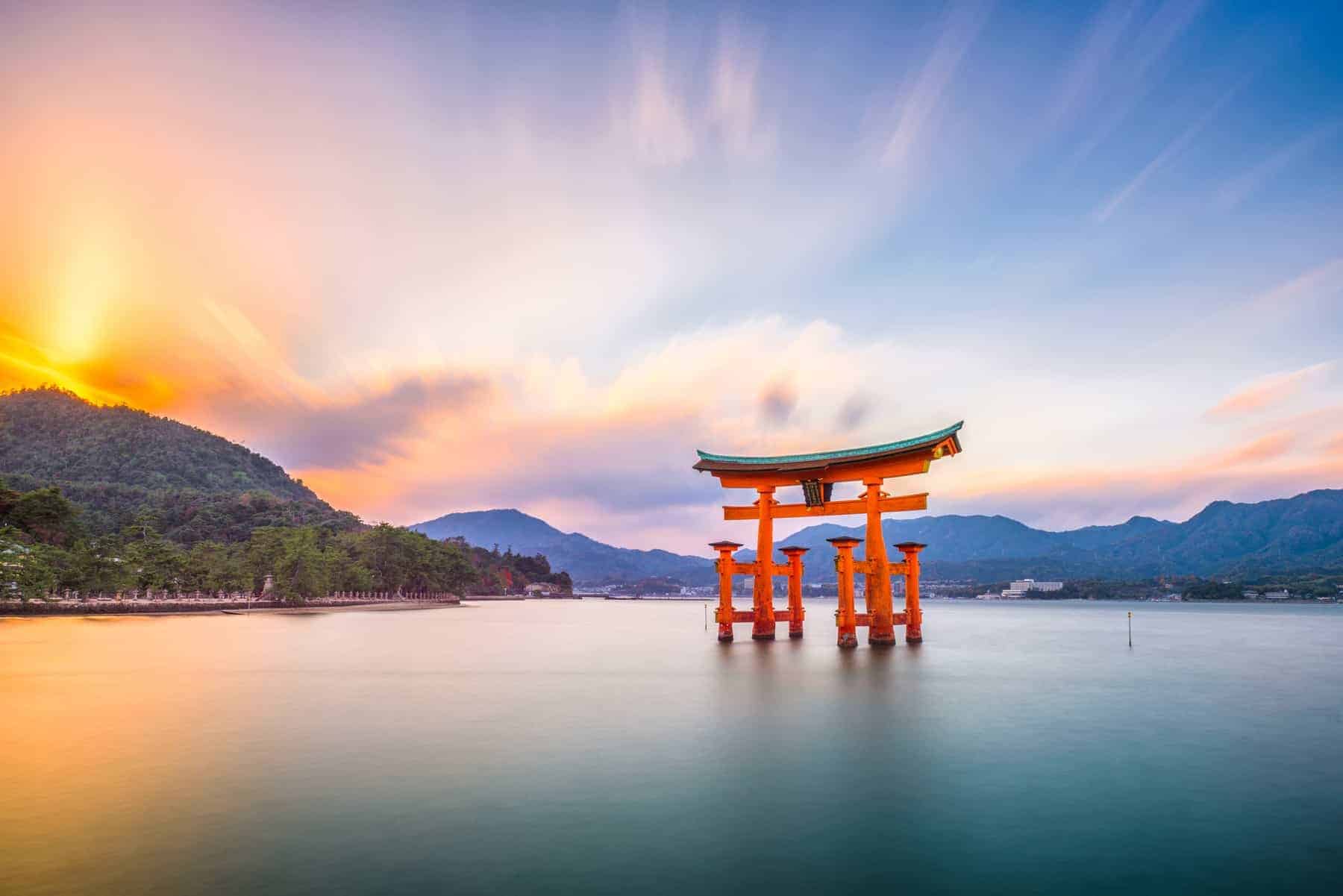 Hiroshima – the new quest for peace

Hiroshima is one of the younger Japanese cities in an old country,  that are less than 500 years old but after the atomic bomb dropping during the World War, II the city’s attractions revolve around the need for peace. There is the peace park, Peace Memorial, Peace Memorial Museum. But apart from these upsetting sites, there are some refreshing places as well such as the Hiroshima Castle and Sunken garden of Shukkein-en. 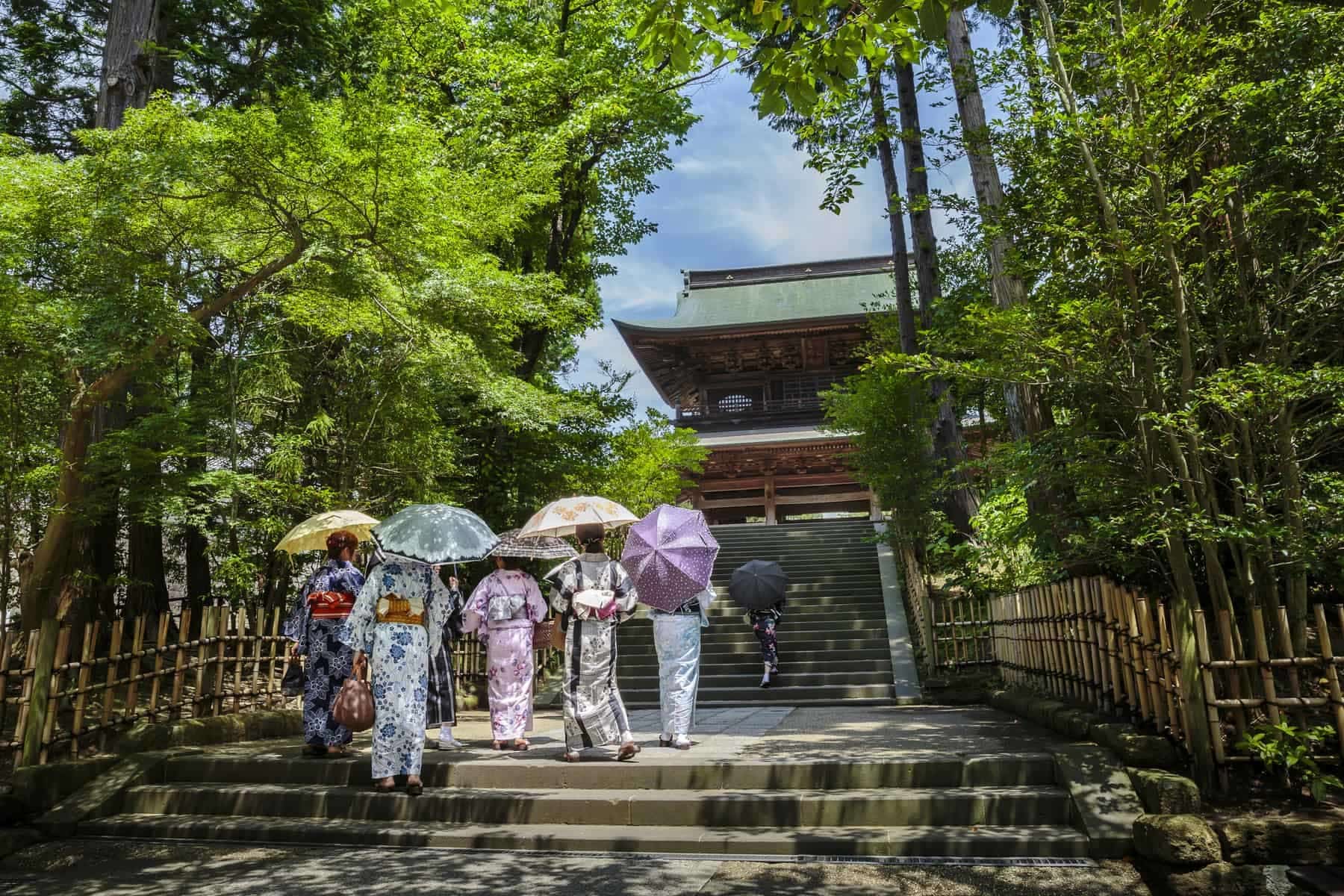 Women in traditional kimonos in front of a temple in Kamakura, Kanagawa prefecture, Japan.

Kamakura is located on the coast an hour away from Tokyo. This was once a very important town because the military government that ruled Japan for a hundred years used it as the  Capital. Now it remains as just a popular seaside resort. It is also sometimes referred to as the Kyoto of Eastern Japan due to the great number of shrines and temples. One of the more popular places here is the Daibutsu which is a huge bronze Buddha statue that is surrounded by trees. Other than that, there are the town’s ancient Zen temples that are quite mesmerizing. 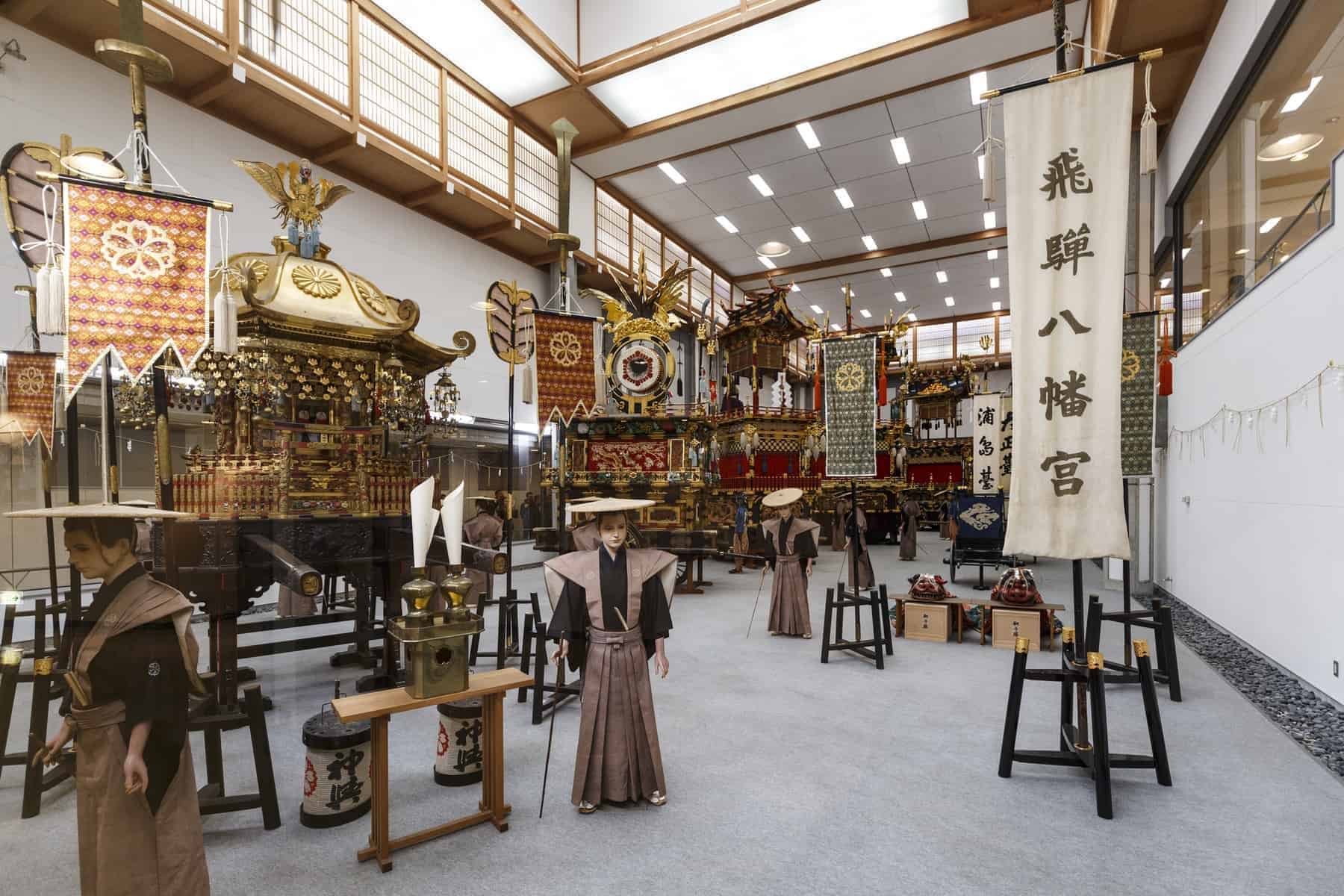 Four of the autumn festival`s eleven floats yatai are exhibited at the Takayama Matsuri Yatai Kaikan a hall next to Sakurayama Hachiman Shrine.

Takayama offers a peaceful and quiet place in contrast to the bustling big cities of Japan like Tokyo being one of the biggest metropolises in the world. Takayama is a quiet rural setting that relaxes mind and body alike. The town of Hida-Takayama is near the northern Alps of Japan and contains one of the most well-preserved old towns in Japan. One of the bedazzling places here is Sanmachi that consists of three narrow lanes packed with wooden buildings and Saké breweries and little boutiques. This just creates the perfect image of a charming small town. 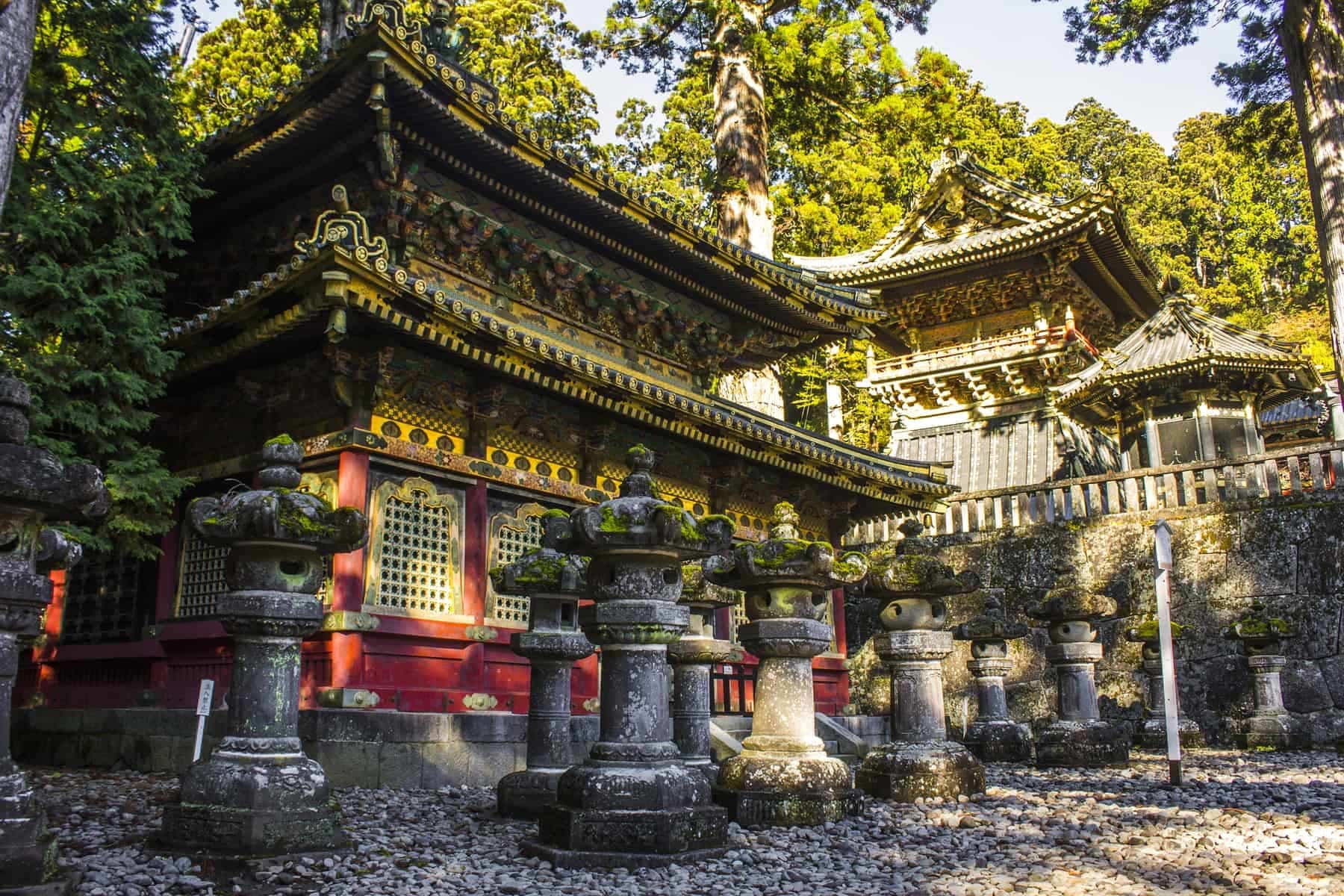 Tosho-gu, a Shinto shrine dedicated to Tokugawa Ieyasu, the founder of the Tokugawa shogunate, located in Nikko, Japan. A World Heritage Site since 1999

At the entrance of Nikko National Park, is a small town called Nikko. It is mostly known for being the most lavishly decorated shrine of Tokugawa Ieyasu called Toshogu. It is on the World Heritage list since 1999. Another very popular place to see here is the Shin-Kyo bridge that is lacquered in red. Other than this the National park offers scenic mountainous landscapes, lakes and waterfalls. And there are monkeys too with many hiking trails to go trekking. There is beauty all around the year but the best time to visit Nikko is fall when the leaves are a brilliant golden- orange color that just multiply the beauty. 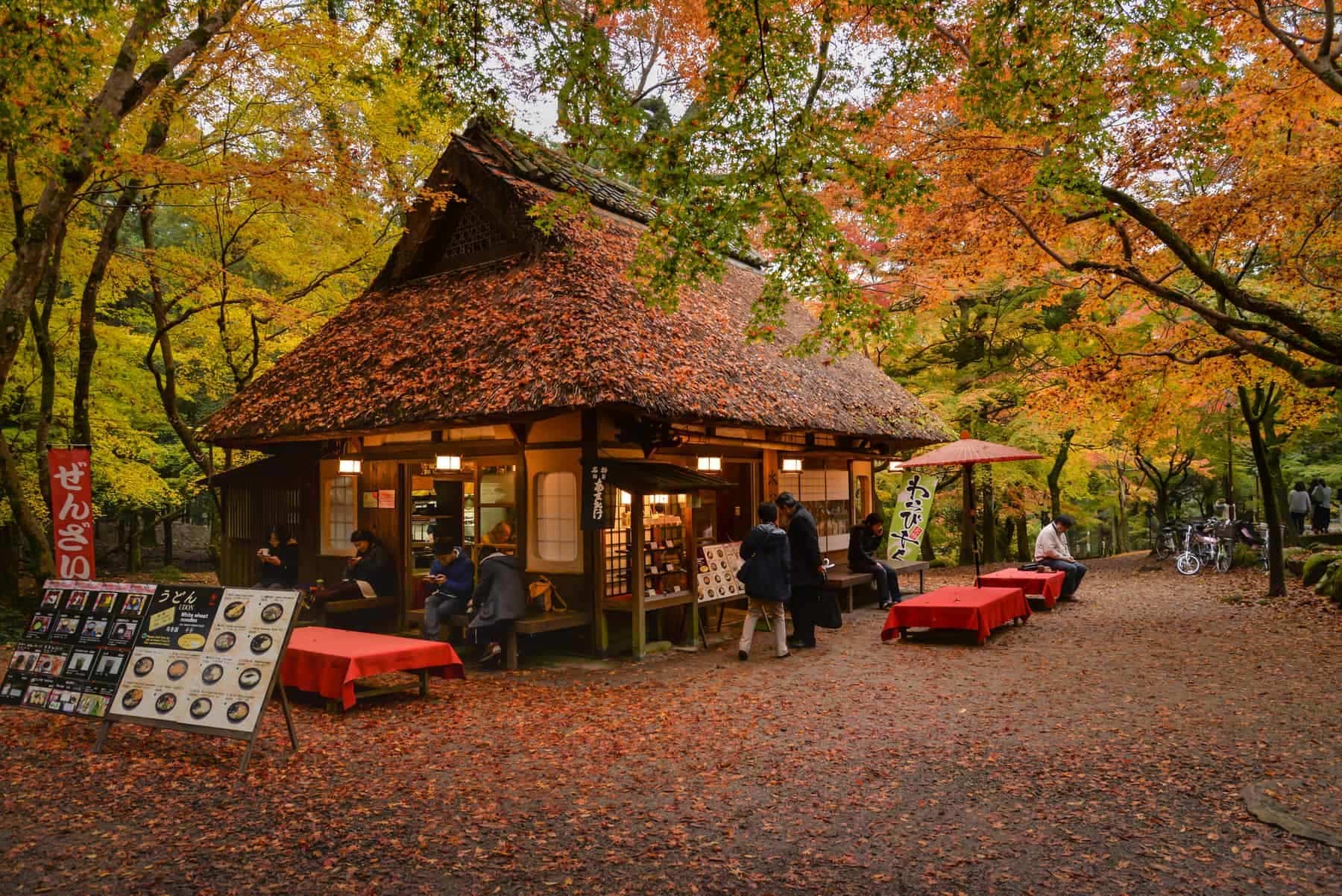 Nara, close to Kyoto where you find the DNA of the old Japan

Previously known as Heijo, Nara became one of the first cities to be permanently declared as the capital of Japan. This city is located an hour from Kyoto. This place threatened the government with the rise of Buddist monasteries and today it has one of the oldest shrines and temples of Japan that attract the tourists.  50 years ago or so there were hundreds of active temples, where you could knock on the gate from the street and ask to become a Buddhist monk. One of the more popular places is Todaiji temple due to its cantilevered buildings, manicured lawns and deer strolling grounds. This city gives a brilliant insight into the rich culture and heritage of Nara. 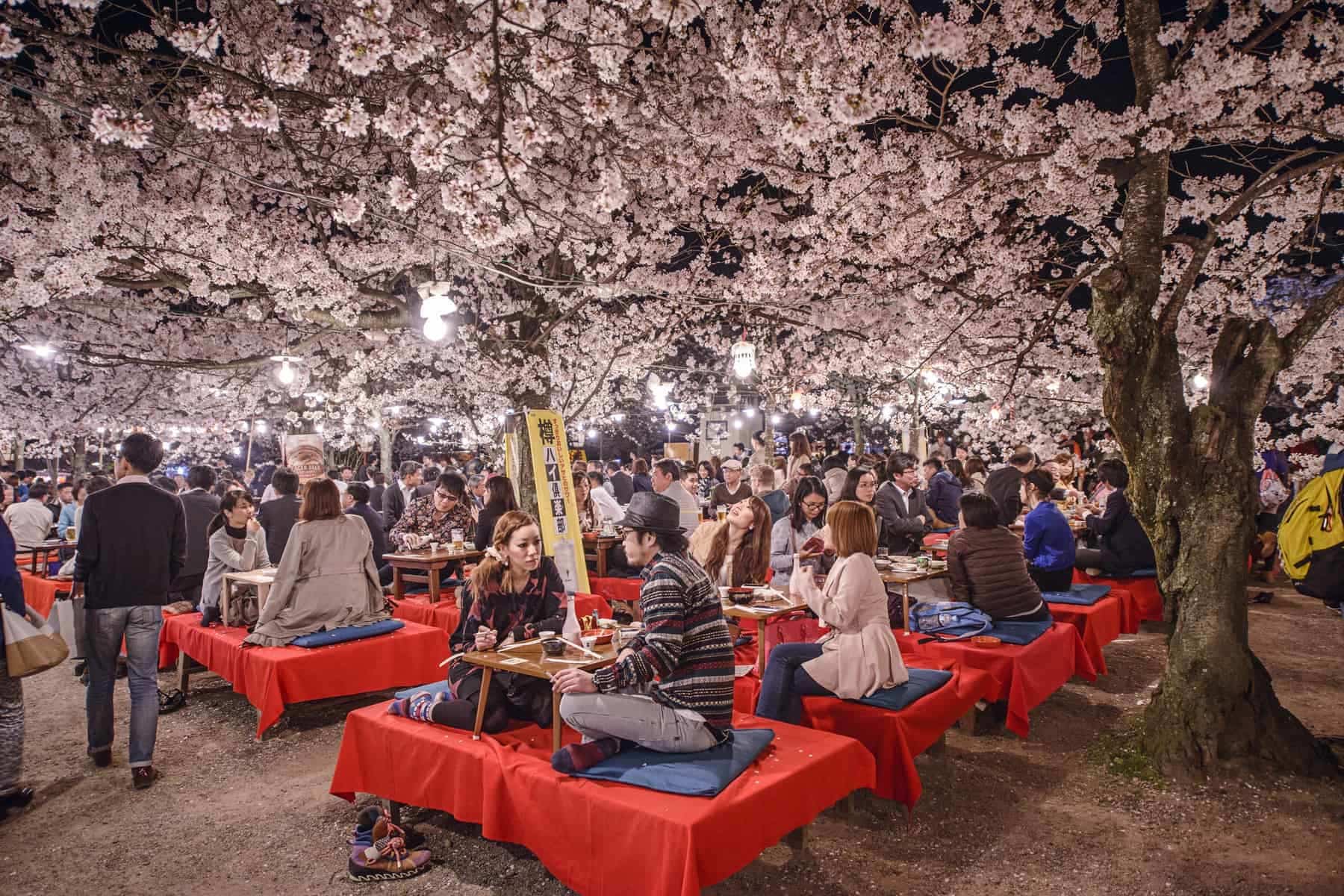 KYOTO, JAPAN People enjoy the spring season by partaking in nighttime Hanami festivals. The annual festivals coincide with the seasonal blooming of the cherry blossoms.

Kyoto once served as the imperial capital of Japan is now the capital of Kyoto Prefecture.  This city is also called the city of 10,000 shrines due to the many of Shinto Shrines there. This city has almost 1.5 million people. It also has one of the top-rated Fushimi Inari Shrines and the lovely gardens. You can also enjoy the Gion Matsuri Festival in July which is must-see. 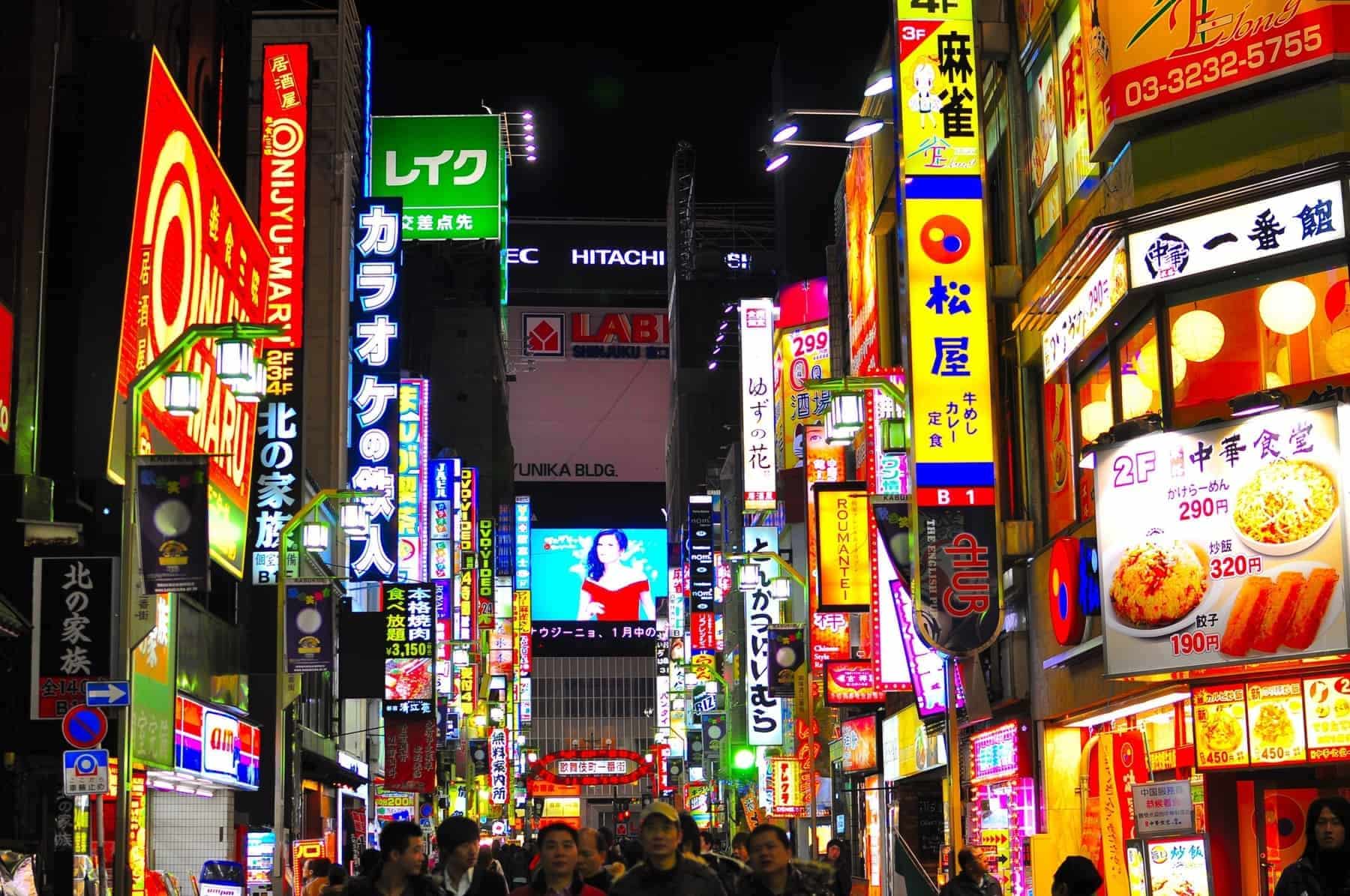 Adventurous and social travelers will definitely enjoy Tokyo. It is a metropolitan place with a lot of activities ranging from seeing cherry blossoms and traditional gardens and the wonderful fish market in Tsukiji. Tokyo blends traditional and modern Japan together that gives you shrines and karaoke bars. The streets are bustling and hype you up but if you would like a lazy day around the city then Shinjuku National Garden is the place for you. 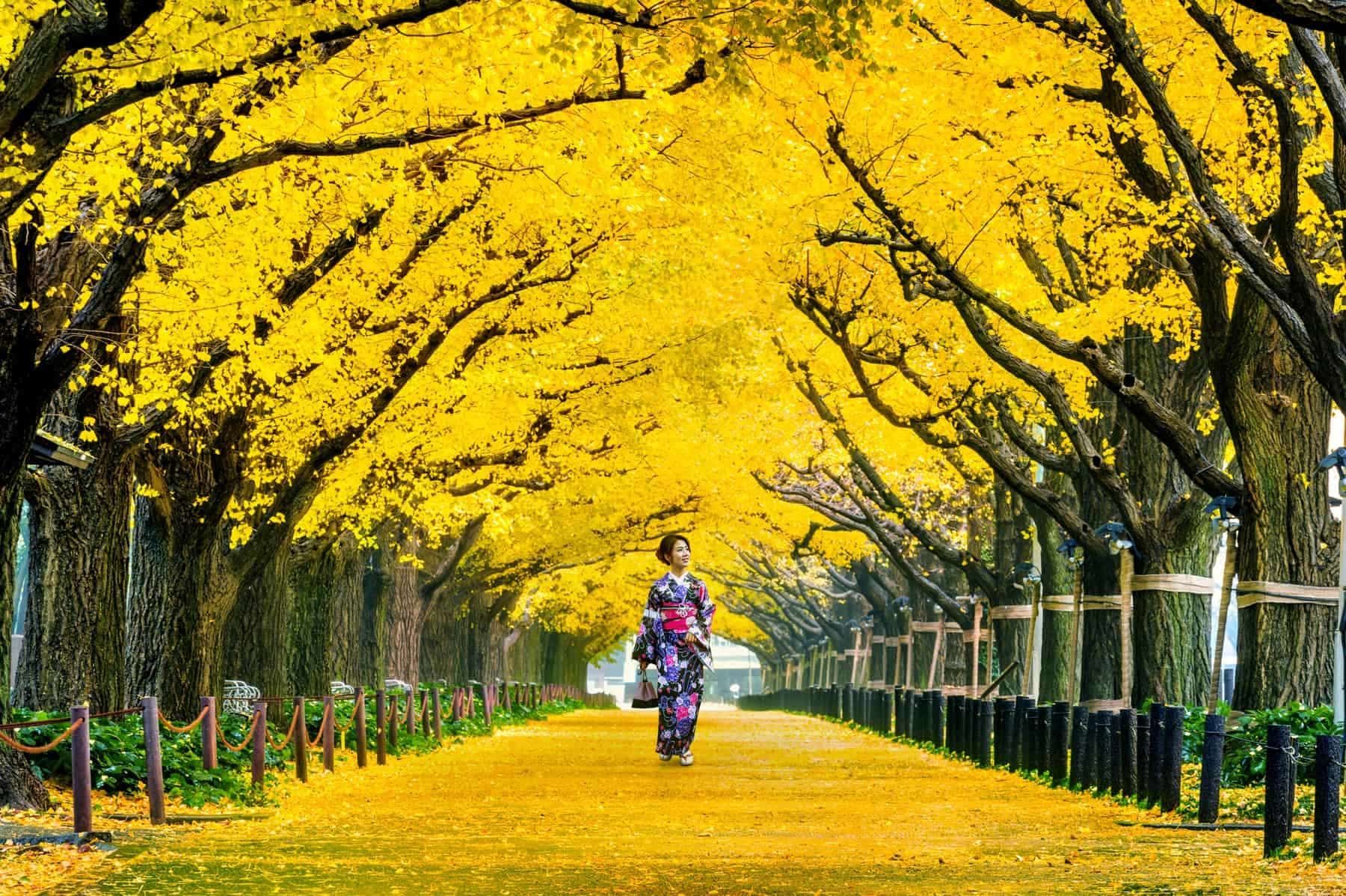 Yangon, Myanmar is famous for its divine temples. Yangon is a bit like Mandalay, also in Myanmar. Everyone knows the place from somewhere, maybe from the song “Come back to Mandalay … and watch fly fishing in play” – but they have…
AdventurePakistan

Top 10 Places to Visit in Pakistan Visit Pakistan? Pakistan has been in the news quite often. The at times challenging relationship with “neighboring countries” is sadly what mostly makes the news. It is sad for the countries on both sides, cause…
AdventureTanzania

Ngorongoro in Tanzania Ngorongoro is the wildest place in Africa, understood at several levels. One of them is that maybe it’s the ultimate safari travel destination. The volcano crater Ngorongoro already from Arusha to Ngorongoro, the adventure is on its way. The tour…
AfricaAdventure

Traveling in Africa. Travel to  Africa, a brief intro to finding travel agents focusing on vacations in Africa. So here we have gathered a few travel agencies (the list is growing), that can deliver your vacation trip to Africa, a trip to…
AdventureSpain

Mallorca’s largest mountain range is incredible Serra de Tramuntana Mallorca’s mountains are an adventure to visit. And Mallorca is actually a pretty big island, ca. 100 km long and 70 km wide. Located close to Barcelona in the Mediterranean, which can be…
AdventureBali

Bali seen from a helicopter

Bali from the air, amazing video Bali from the air: It is perhaps the best visual introduction to Bali. From wide beaches to narrow coastal gorges and further across the country’s green vegetation. It’s like being Indiana Jones on adventure. Up, up…
AdventureGuatemala

The trip through the jungle to El Mirador. On adventure in Guatemala

El Mirador, luxury beach days or a trip through the jungle? Do you have 5 days you don’t know what to use for? So here’s a suggestion. You probably just have to give transport time for air transport with lay-over to Guatemala,…
AfricaAdventure

South Africa  is the engine and most visited country in Africa South Africa is an extraordinarily beautiful country that inspires, rejuvenates and pulsates with a mix of cultures and nationalities. Where else in the world do you find a country called the…
AdventureFiji Islands

Island hopping in Fiji´s incredible archipelago with 1000 Fiji islands to choose from. Mamanucas is on the “must see” list, now that you’ve landed and ready for your Fiji vacation. The list is long, but at the top is the classic archipelago,…

Boracay, among Asia’s most beautiful tropical islands. Boracay island in the Philippines is always among the top tropical destinations in almost every travel list due to it’s pristine white beaches and year-round climate of 25 degrees up. A trip to this beautiful destination, if not…
AsiaMaldives