Amazing castles to visit in France

Castles in France, perfect for a vacation road trip.

Everyone has their own idea of what is stunning and romantic castles or chateaux as they are called in French, the plural tense of Chateau, but without any doubt, the castles in France are the ones that you see mostly in films when the theme is “castles and romance” and we are here to provide travel inspiration from these magnificent examples of the grandeur in French history.

A simple suggestion of how to visit a selection of French Castles, remember the white wine and sandwiches.

Imagine for a moment you are sitting in your open Jaguar E type (rented or owned) and crossing  France, obediently taken directions from Google Maps to reach a total dream place with amazing history, romantic architecture and of course French wine and food as a reward for all your hard work getting there. Now to most of us, it is not a bad way to spend a Thursday. Except you may want to bike there, you have ample time, so do the castles. Some are close to 1000 years old, they will wait for you. Get there any way you like, but please do visit. These are highlights of castle history and French culture.

France is the place that has served as a battleground for many legendary battles during the medieval period, and you might also remember France for the Eiffel tower, Tour de France and great French artists. The cuisine is world-famous and the french lifestyle is elegant and sensual.  One thing you are missing out about France is the gigantic castles, with the inspiring history, sprawling walls and the architecture that has no match. Please bear in mind that the French word château has a wider meaning than the English castle: it includes architectural entities that are properly called palaces, mansions or vineyards in English.

The grand fortresses in France and the exquisite castles are absolutely worth visiting bordering on mandatory in a trip to France. And exploring the history of these castles is always a fun, educational part of the visit. You might have heard of the extravagant châteaux, you might have seen them in the movies or read about them. They are a must-visit for sure.

Here is a list of the perhaps top 10 castles in France. Browse or scroll through them, get travel inspired,  look and plan your next vacation to France to see the amazing castles with the unique history and generous examples of French art, and architecture.  The most famous of all, we will devote a full article. The Versailles – in 2019.

Versailles, the most magnificent of all French Castles

The Palace of Versailles has been listed as a World Heritage Site for 30 years and is one of the greatest achievements in French 17th century art. Louis XIII‘s old hunting pavilion was transformed and extended by his son, Louis XIV, when he installed the Court and government there in 1682. A succession of kings continued to embellish the Palace up until the French Revolution. 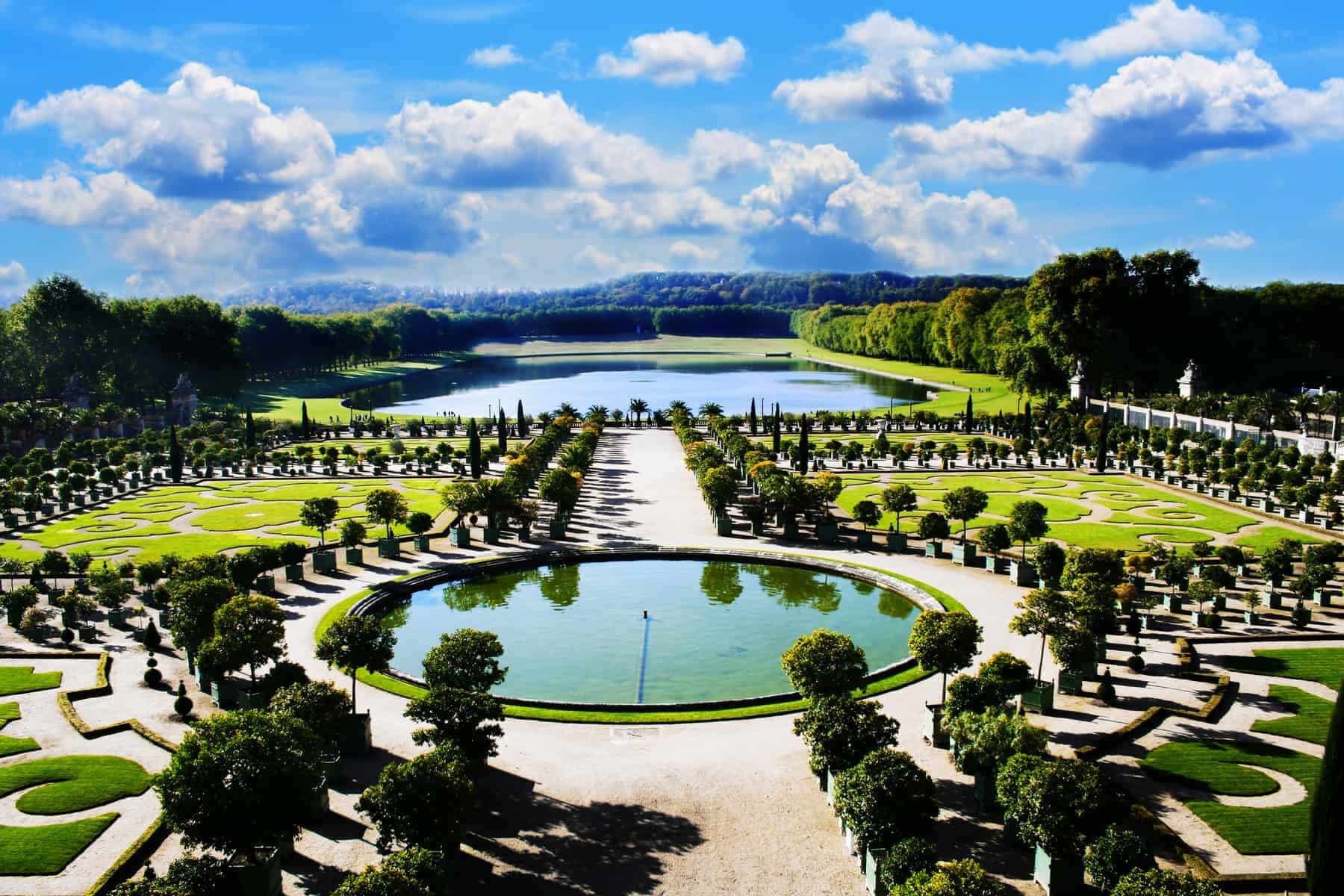 The National Estate of Versailles is a grandiose property of over 787 hectares (~1,945 acres). As a major world heritage site welcoming nearly 15 million visitors each year, the Palace of Versailles (Château de Versailles) is a former royal residence, a history museum, and a national historic building, where the French Parliament meets in Congress. 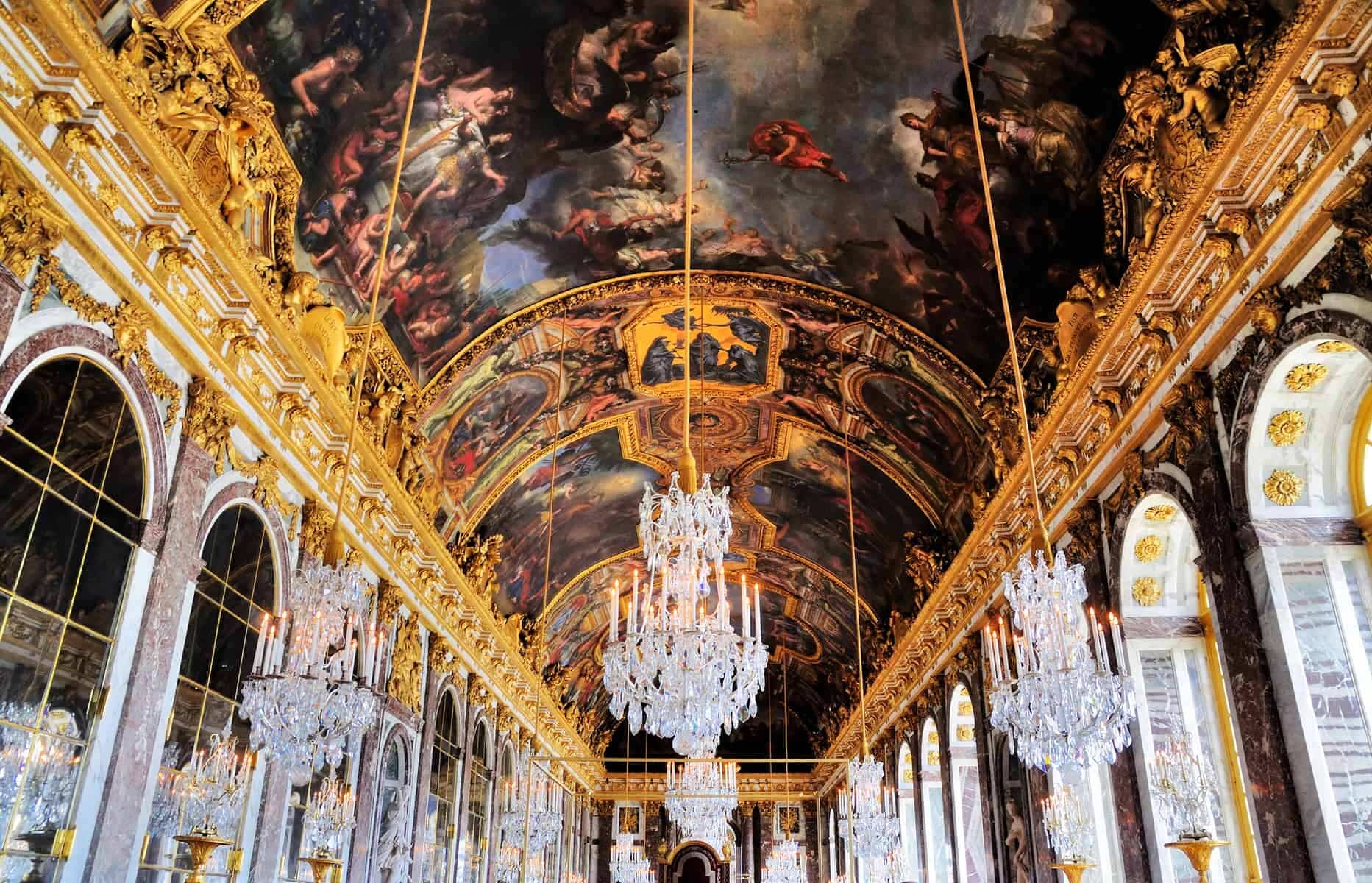 Over a hundred rooms in the Palace bear witness to the lavish luxury of the former royal residence, while nearly another hundred, across 10,000m²  display the remarkable collection of paintings and sculptures of the museum of French history, created by Louis-Philippe in 1837.

Starting in the Royal Courtyard, make your own way around the different areas of the Palace. Then cross through the gardens and groves to visit the two Palaces of Trianon, and Marie-Antoinette’s Estate.

Chateau de Chantilly and the geese crossing the pond

Château de Chantilly is one of the finest castles in France, that you easily visit from Paris as it is situated a short trip north of Paris.
The Château de Chantilly is a major historic château located in the town of Chantilly, France, about 50 kilometers (30 miles) north of Paris.
The site comprises two attached buildings: the Petit Château built around 1560 for Anne de Montmorency, and the Grand Château, which was destroyed during the French Revolution and rebuilt in the 1870s.

Owned by the Institut de France, to which it was bequeathed in the will of Henri d’Orléans, Duke of Aumale, the château houses the Musée Condé. It is open to the public.

This castle now counts as one of the most impressive Chateaux, because of the dedicated art collections and the historic preservation it represents.

You can find the medieval sculptures, precious art and the stable, which is now a museum for equestrian. All this huge collection of art was preserved by the Princes of Condé. Château de Chantilly is in Oise.

Château de Chambord is in the Loir-et-Cher. Château de Chambord beats the list of most beautiful castles in France and in the world. It was constructed in the 1500s. King Francis I, built it. it was rumored that the castle building and the architecture were inspired by the Leonardo Di Vinci’s art and sketches. This is another one of the renaissance era building.

Visitors are again able after great gardening reconstruction work to discover the joys of strolling in a classic french chateaux park or sitting contemplating life and what’s for dinner in the château’s French formal gardens.  It is perhaps the best example of this school of making majestic gardens. These gardens link the château to the nearby forest.

During the reign of Louis XIV and the Marshal General de Saxe’s* visits to Chambord in the mid-18th century, the château’s immediate surroundings were transformed through significant terracing, hydraulic works, and landscaping.  The French formal gardens designed in 1734 were a key feature of the transformation of the castle. These gardens, which gradually fell into disuse after the Revolution, were finally reduced to simple lawn parterres in 1970. This marked a transition period that lasted more than 40 years. Nor the gardens are being redone back to their original size and shape.

More than 1000 amazing parks are open to the public. Here are a few:

*Maurice, Count of Saxony was a German soldier and officer of the Army of the Holy Roman Empire, then the Imperial Army and finally in French service who became a Marshal and later also a Marshal General of France.

Chateau de Saumur, one of the Loire Valley castles, France

Later on, in the 12th century, it was rebuilt. The Henry II of England rebuilt it and transformed it into this amazing castle having octagonal towers and the multiple windows. this outlook makes the castle look like a castle just like the one in movies and stories.

Winter view of the Chateau du Haut-Koenigsbourg in the Vosges mountains. A major tourist attraction in Alsace, France

Chateau du Haut is on a high hill that overlooks the Alsatian plain in the Vosges mountain of France. Chateau du Haut if famous for the strategic location it has. It was in use by the powers and the kings in the middle age.

But the Swedish troops burned it in the thirty years’ war. After that, it was left unused and had a dense forest grew all over the castle. It was rebuilt in 1899 and was given to the German emperor Wilhelm II.

It was also used as the royal residence till the 1600s. and later it was used as a public park on the orders of Napoleon III, in the year 1860. These days, it is open for visitors as the historic, royal chapel from the 16th century.

Chateau Gaillard was built in 1196 and 1198 by Richard and Lionheart. The Chateau Gaillard has an exquisite view and the beauty is added to it with the over the hill view, which is mesmerizing. After being in the hands of English and French powers, to and FRO. It was later destroyed by the Henry IV. It was destroyed in the year 1599. However, the thick and well-constructed Chateau Gaillard resisted and went through the destruction. The remains and the ruins of Chateau Gaillard are still pretty impressive part of the history. Chateau Gaillard is open to the public. So, they can visit and look through the turning pages of history.

The Chateau de Vitre, a medieval castle in Ille-et-Vilaine, France

There are many other historical and visit worth castles in France. Although, it is not possible to visit all the castles in just one visit to France. Make sure you list down all the famous castles of France and visit them one by one.

Visit France, the most popular travel destination in the world

Most famous castles in Scotland

Castles in Italy from Rome to the island of Ischia, you can visit today The history of Italy goes way back and is therefore very rich in archaeological sites and Etruscan, Roman and Romanesque buildings, as well as many other eras. Thanks…
Castle HolidaysEngland

Castles in England, where the adventure begins. The castles of the British Isles have always fascinated travelers from when they were constructed to modern times. The English castles evoke images of royalty, kings, queens, princes, princesses and even ghosts. Unrivaled legend and…
Castle HolidaysEngland

10 magnificent castles in Germany curated for your pleasure Neuschwanstein Castle You will probably be rather surprised to know that in Germany there are no less than 20,000 castles. Choosing only 10 out of this huge number is not an easy task. There…
Food and WineFrance

Camping holidays in France, with over 11.000 campsites

Camping vacation in France: An enormous selection of camping sites Camping in France is for those who want to enjoy a vacation in  France with the freedom to go from place to place without sacrificing comfort at all. Add to that: At…
FranceSki vacation