The world´s biggest cave is the Son Doong cave in the national park Phong Nha-Kẻ Bàng. It is in a way at the same time an ancient cave and a new discovery, only ca. 12 years since this miracle of nature was found.

The Son Doong cave has become world-famous in under 10 years. It is located in the middle of Phong Nha Ke Bang National Park in Quang Binh province of Central Vietnam. It is a miracle of a cave system, first discovered by The British Cave Research Association in 2009 and opened in 2013. Also, availability is heavily controlled. Only one company can arrange trips there, and the tours are typically booked one year in advance. 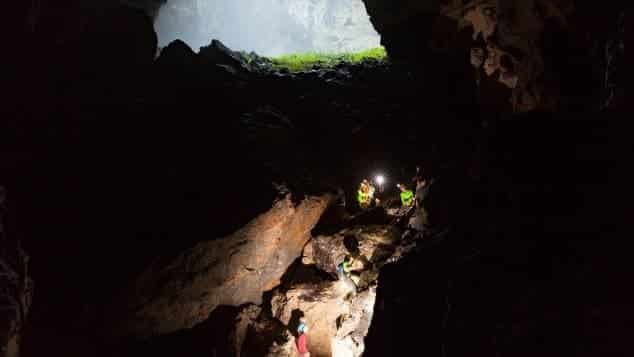 It is said that more people have reached the peak of Mount Everest than been in Son Doong, so this is a very rare destination. 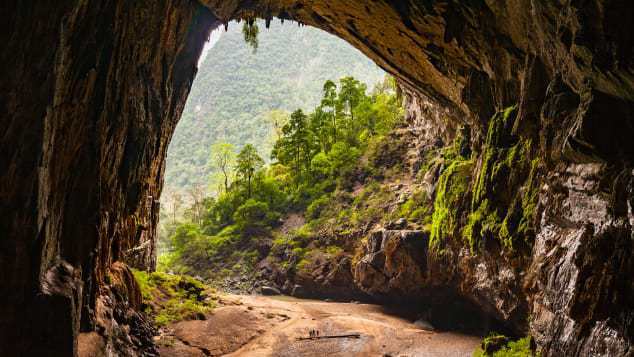 A Boing 747 could easily be in the Son Doong cave.

The cave is huge. You could park a Boing 747 in the cave effortlessly. The cave is characterized by giant stalagmites (opaque limestone columns) and their counterparts hanging in meter lengths down from the ceiling (stalk mites). The huge size of the cave gives an almost out-of-this-world impression.

The jungle grows into Son Doong, as long as there is just a little light. Archaeologists and geologists make important, million-old finds here. On the way in, you will experience a breath of cold wind in contrast to the warm jungle temperature you have gone in. You are fully aware that this is something quite different.

Adventure tour organizers Oxalis have all rights to cave visits in Son Doong. And it’s a tough and quite expensive 3000 USD jungle exploration. It is an experience for life and the selected few who get tickets that are released at the beginning of each year. Thus, the UNESCO conservation worthy mega caves are protected forever. Only 10 participants are allowed per trip/week. Visitors are limited. also in the time from February to August with a trip per week. The cave is so large that it actually has its own ecosystem. The proportions are gigantic. The largest stalagmites are 8o meters. There are rare rhinestone beads in the cave walls and beautiful lakes in the middle of the cave. Openings here and there in the ceiling allow a little light and vines to crawl into the cave, and the green foliage decorates the lime gray walls. 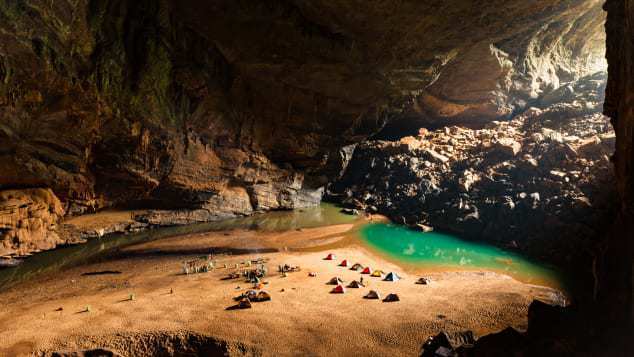 To get there you have to go two days through the jungle, cross mighty rivers, stay in tent for the night, swim in underground lakes and much more. It is a real expedition. There are experienced guides with you. That’s what they do all the time, so you are in good hands. There are 20 carriers alone. Ready for the trip in 2020? 🙂

The Dark Cave in Vietnam, an irresistible challenge Unsure of what we actually said yes in Vietnam, we are joining a couple of Israelis we met over breakfast, off to The Dark Cave. We have rented a moped and drive through the national park towards the cave, which is...
Vietnam Adventure Travel

Hoi An, the only village in the world with hundreds of tailor shops Mikkel, one of our writers, says: In November 2015 I traveled to Vietnam for two weeks. With a backpack, I traveled through Vietnam on a scooter, by bus and by train. Several cities were visited during...
Vietnam Adventure Travel

The golden bridge in Vietnam A pair of giant hands lift the "light as clouds Golden Bridge" up in the air above Vietnam’s Trường Sơn Mountains. The amazing structure emerges from the trees of Thien Thai garden in Ba Na Hills. It is like ancient and totally...
Tanzania Adventure Travel

Ngorongoro in Tanzania Ngorongoro is the wildest place in Africa, understood at several levels. One of them is that maybe it's the ultimate safari travel destination. The volcano crater Ngorongoro already from Arusha to Ngorongoro, the adventure is on its way. The tour starts from the nearby town of...
Sri Lanka Adventure Travel

Travel to Sri Lanka, the overlooked South East Asia Travel to Sri Lanka is a good travel tip, one you may never have considered. We would also like to tell you why. Sri Lanka joins an exclusive circle of countries in Asia that are more or less undiscovered and...
Bhutan Asia

Gangkhar Puensum is the highest unclimbed mountain in the world