Singapore is as green a city, as they get.

Singapore is the greenest city in Asia? Wow. Singapore is perceived by many as densely built with impressive skyscrapers, but did you know that Singapore is perhaps also even the world’s greenest city or country, since it is a city-state? And as a city, it has strict building rules to grow the city as a still greener city. Singapore does a lot of research and actual food production on top of buildings and biotech solutions to make it a more sustainable city. It is deeply inspiring.

Singapore is a small, densely, populated island nation where 100% of the population is urbanized. And yet, the city-state of Singapore is the greenest city in Asia, according to the Green City Index, and arguably has few competitors in the rest of the world. Other lists call it the greenest city in the world.
As Singapore’s population and the economy grew exponentially, so did its green percentage of the m2: it was about 36% in the 1980s and it now stands at 47%, according to the Center for Liveable cities. And while the word “green” can be measured in different ways, this is the easiest to measure. How much area is “green” also in new high rise buildings and existing ones being modernized. You have by law to allow for a fixed percentage of terraces, parks, creative mega green trees, named supertrees, etc. Singapore does it all them all — green city environments, renewable energy, and future sustainability is planned legally binding and executed.

Maybe the greenest city in the world

In an official listing, Singapore is ahead of cities such as Vancouver, Amsterdam, and Copenhagen.
The city’s town planners in Singapore years ago realized the need to create a Singapore as a green city with more trees, shrubs and plants in the city. Today the implementation of this extremely ambitious green vision exceeds all expectations. The method has been innovative, to say the least: Containing new land, filling the city with new green areas, also at the top of a large pump house against flooding in the city and inserting the requirement for “Green urban city development” in all relevant building and urban plans for approval. 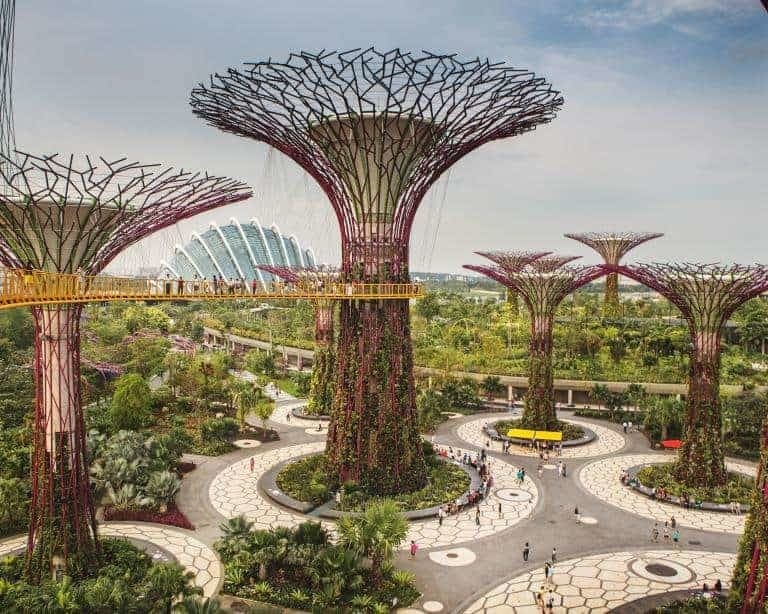 Here are inlaid gardens between the buildings on floor heights between 26 and 50 floors.

The pattern example of Singapore as a green city is Marina Bay, where some of the city’s best and most prominent hotels are located. But you will also find parks like the city’s lung here. Jurong Lake District is a business district under development and you see the same trend here. 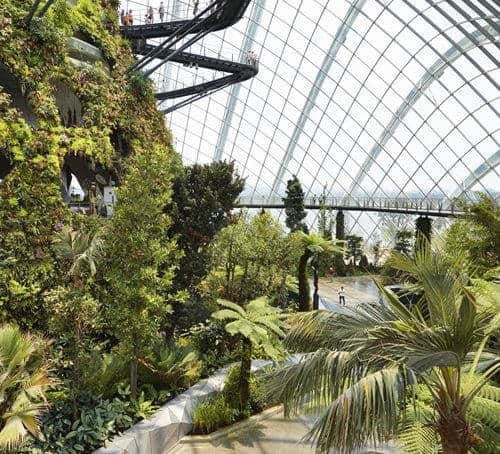 Singapore is both a country by definition and an island approx. the size of Berlin with 5.7 million inhabitants. The city has rich cultural traditions and a mix of Chinese, Malay and Indian culture with a touch of American. A true crucible in high gear without forgetting nature and oxygen to residents of mind and body. 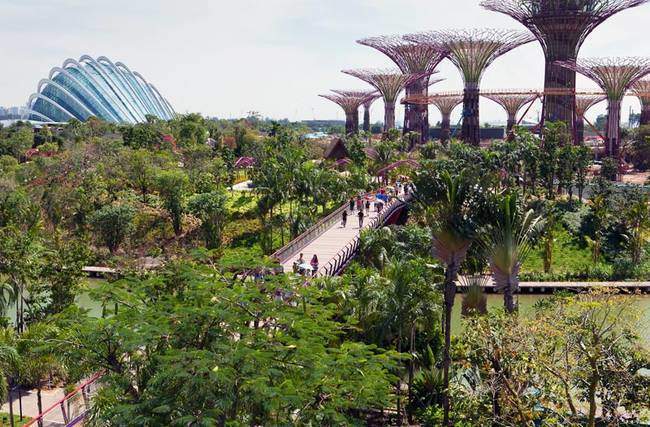 Singapore as a green city with supertrees at 50 meters height

Singapore as a green city. Here’s a good example, hold on! Supertrees: The photos in this article show the amazing vertical tree constructions that are both statuary, illuminate the night sky with solar-powered light created during the day, and give life to 1000’s of plants growing on the “tribes” there is up to 50 meters high. They are on a par with the Round Tower.

So when you go to Singapore, you see 26% of the area planted with botanical gardens (one of the world’s largest found here) parks, trees, etc. And modern vertical solutions are used as the supertrees.

Fullerton Hotel, top-class hotel in Singapore Located in the imposing Fullerton Building, Fullerton Hotel is an example of neoclassical architecture at its best. The location of the hotel right next to Marina Bay in Singapore couldn't be better. The building itself dates back to 1928 and today it is...
Singapore Food and Wine

Little India in historic Singapore goes back to 1840 Little India in Singapore is an exciting old town that is now completely revitalized. The district once had an important gallop track, where "better people" often met. Cattle were traded in the middle of the district, and the food was...
City ​​Breaks Airlines

Raffles Hotel Singapore after the reopening Raffles Hotel Singapore reopened with an expanded suite count of 115. Take a look at what's new, amidst the striking architecture, heritage and graceful service of the hotel through the centuries. In the personal sanctuary of your suite, experience the glamour and sophistication...
Singapore City ​​Breaks

Singapore top hotels, where to stay in absolute luxury

Singapore top hotels. 5 luxury picks in Singapore. According to the annual major survey and reader poll from T + L, the list looks like this for Singapore's top hotels. We bring it here and more information on selected hotels from the list. There's...