Rubjerg Knude: A scenic place formed millions of years ago

There are many who often use the holidays to head south. Airports and highways are crowded with people and cars that seek to escape the Danish country for a few weeks, and, return with their travel bag full of souvenirs, good memories, and photos of ageless nature from foreign skies. Many, however, forget about the road heading away from the cold north. The little beautiful Danish country is enough for natural pearls and experiences to fill the summer holiday calendar. Take Rubjerg Knot as an example, a fantastic place where many travelers head out for the holidays. 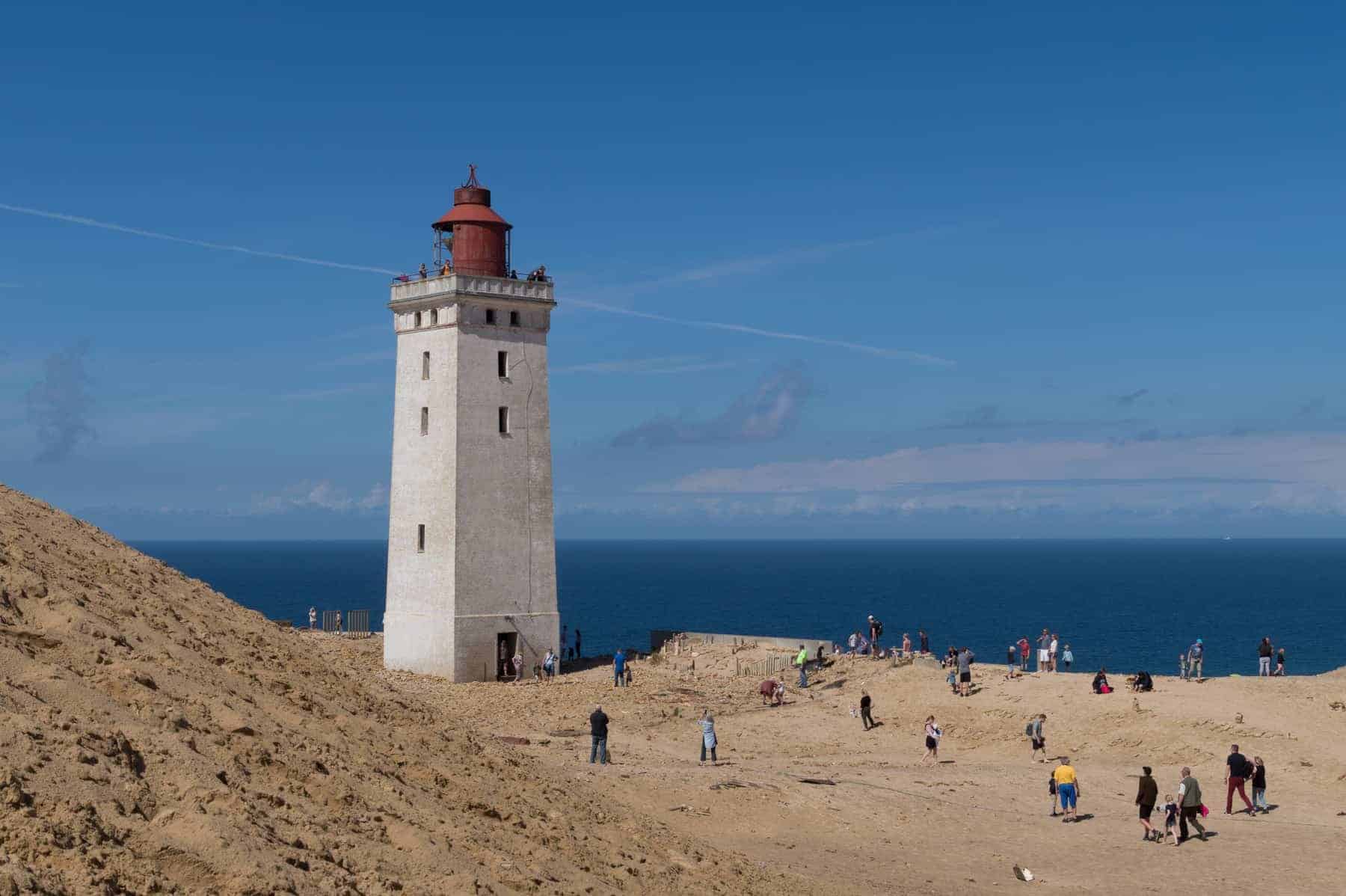 Rubjerg Knude is located on the west coast of Jutland between the popular holiday destinations Løkken and Lønstrup. Even at a distance, the area is breathtaking with the bright sand dunes, which lie as a protective wall between the green, peaceful landscapes and the foaming waves of the roaring North Sea. When you arrive at Rubjerg Knude, you first meet the plantation area and the greenery, which is abundant of sea turrets and shells. Here is also Rubjerg Gl. Church, in which one gravestone stands out. Not so much because of the deceased, but instead due to the person’s date of death in April 31, 1877 (a date that does not exist). According to the legend, the stone-cutter would not change the date without requiring an additional payment of two kroner. This did not affect the family, and so Willum Hansen made this very special memorial. 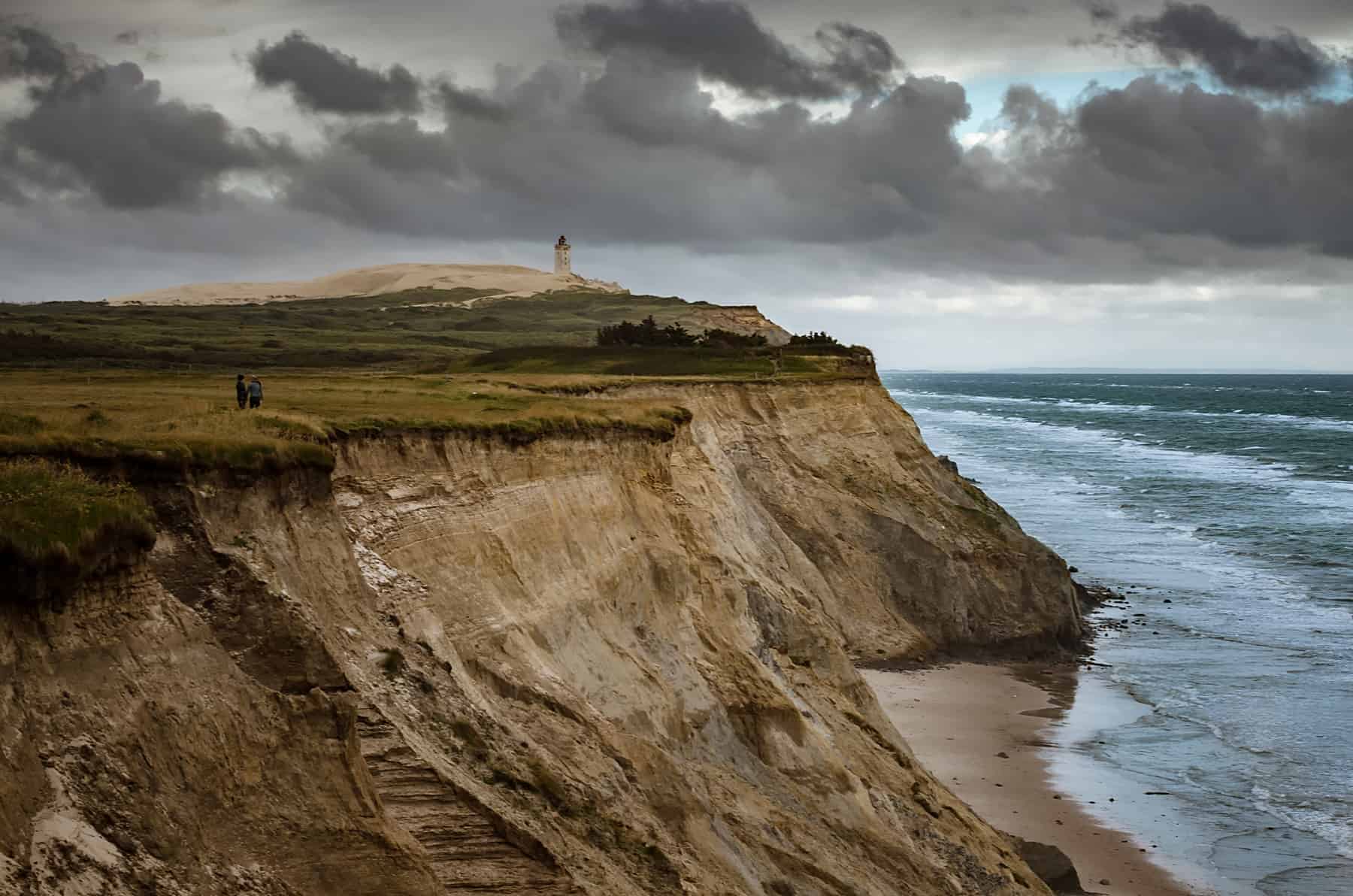 Lighthouse in the dunes

You can see it immediately as you approach Rubjerg Knude. The Rubjerg Knude Lighthouse, upright in the rising sand dunes. The lighthouse, first powered on December 27, 1900, consisted of a number of buildings beyond the 23 meter high tower. Among other things, there was a four-man residence, a gas station with a tank, a well and a garden area. The Rubjerg Knude’ s lighthouse was built 200 meters inland at a height of 60 meters above sea level, but as the years passed, the violent sand drip resulted in the dunes moving closer to the lighthouse. In spite of many repairs, helmet planting and the construction of walls, which all had to protect the lighthouse against the sandy flight, one had to end up fighting the harsh nature and on August 1, 1968, the light in Rubjerg Knude Lighthouse was lit for the last time. The lighthouse lens, produced in France and costing $ 42,000, was taken out of the lighthouse and is today buried somewhere in the sand dunes.

Experience it before it’s too late

A few years after the closure of the lighthouse, a museum was opened for sandblasting in the buildings. However, in 2002, this museum had to move the exhibition to Strandfogedgården, located two kilometers from the lighthouse, due to the fact that the violent sandblast was now destroying large parts of the structure. Today, Rubjerg “Knot” Lighthouse is only about 60 meters from stepping down from the steep cliff and in the roaring North Sea. The lighthouse, which began to lie 200m from the edge of the cliff about 116 years ago, will be thrown into the sea within two decades unless it is demolished before. Rubjerg Knot and its lighthouse are a piece of Danish history that soon passes. A struggle between people and the merciless nature. A match to be experienced before it’s too late.

Not so far away from Rubjerg, you find Skagen, an iconic old village and a meeting place where two seas meet at the very northern tip of Denmark.

Is Shopping in London Europe's Best Shopping experience? Here's an intro to shopping in London that will titilate your shopping gene, and London does that to you! London Fashion Week (LFW) is a clothing trade show that takes place in London twice a year, in February and September. Showcasing...
Denmark Sun and beach

Skagen in Denmark, where sun, sea, and ocean meet in perfect harmony Skagen is a historic place in Jutland (Danish mainland connected to Germany and mainland Europe) and nowadays a  place for the trendy and cool crowd, but also a place to visit for all of us, cause when summer...
Cycling holidays Denmark