Pokhara, last stop before the Himalayas

Pokhara in Nepal is usually just a stop on the way to a longer hike, but there is certainly no reason to cheat yourself for the delights hidden in this exciting and cozy town in Nepal.

Most visitors to Pokhara are people who are either on a short visit before their hike in the mountains or have just returned to sit back and take care of a tired body and sore legs with good food and relaxation. Despite the constant transport of tourists back and forth from the mountains, the city has managed to create an inviting mood, that gives one a desire to stay a while.

Pokhara in Nepal is centered around Phewa Lake, and if you want a Nepalese wool sweater, a pair of hiking boots or a souvenir home, Lakeside Road – the closest to the lake – is the place to come. The small facades of the many shops often store a huge back room with clothes in all colors, so it is also worth going into the shops that look most modest. And there is plenty of room to negotiate prices. As in any other poor country, and  one must not forget that Nepal is that, it is important to have fairness in mind and consider whether to really try to push the already low price further down, and leave the seller with close to nothing. A good middle price is desirable for all parties, and the welcoming Nepalese people make it easy to compromise.

Lakeside is the setting for more than shopping, and when it’s time to fill up the depots, after the hike or an adventurous day in Pokhara, the good restaurants are not far away. There is a varied selection in similarly varied surroundings. The country’s geographical location has certainly influenced its cuisine, and Indian-inspired curries are very popular in the restaurants here. Western cuisine is also strongly represented, and the traditional Nepalese Newari cuisine is of course also present at Lakeside – several places serve local food with associated dance and music. If there is too much traffic congestion on the main street, it is easy to search for the actual lakeside, where, overlooking the lake, food is served in restaurants and in lounge-like cafes where you can enjoy the relaxing surroundings. 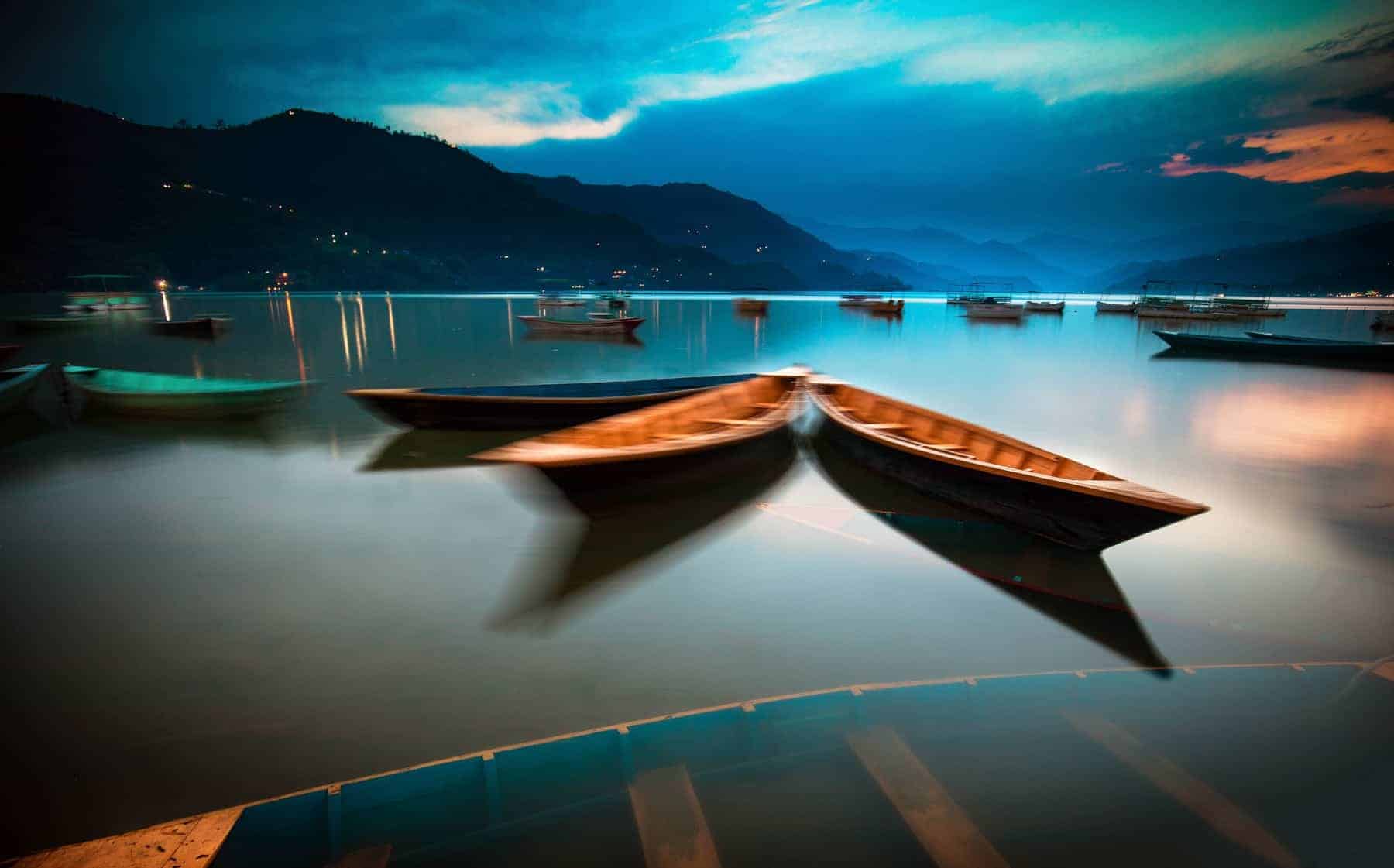 A fun afternoon on Lake Phewa

Phewa Lake, Phewa Tal or Fewa Lake is a lake in Nepal formerly called Baidam Tal located in the south of the Pokhara Valley The lake is stream-fed from the mountains, but a dam regulates the water reserve. It is the second largest lake in Nepal; the largest in Gandaki Pradesh after the Rara lake in the comparison to Nepal’s water bodies. It is the most popular and most visited lake in Nepal. It is the only lake in Nepal to have a temple, Tal Barahi Temple at the Lake. 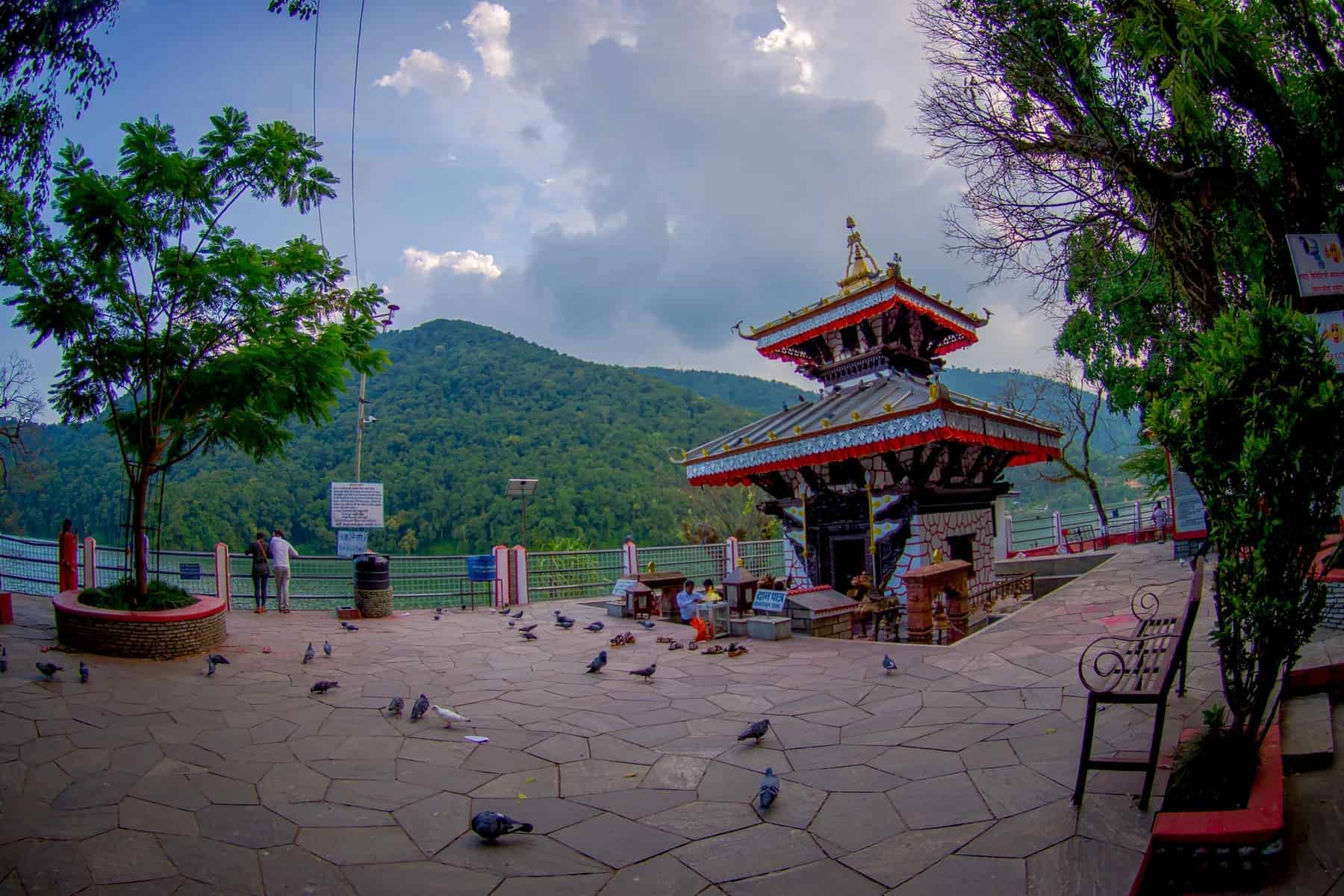 POKHARA, NEPAL – People walking around of Tal Barahi Temple, located at the center of Phewa Lake, is the most important religious monument of Pokhara.

Phewa is not only a beautiful backdrop to the city but also a haven for people who need to slow down. Several places around the lake are rented out there to tourists for room and board. Equipped with a bottle of water and a good packed lunch you can easily spend a few hours on the lake. Inland it is not clear, but as soon as you are out on the lake looking back over the city, the Himalayas show themselves on the clear days as a magnificent wallpaper that frames the small town.  We are more than 4000 meters up and yet the mountains rise majestically around the lake. The snow-covered mountain peaks are a sight to behold. And if there is a need to explore further, one can sail to the Tal Barahi Temple, which is in the middle of the lake. The Hindu temple is Pokhara’s most important religious monument and provides fine insight into the religious culture.

On the street in Pokhara, it is very normal to be stopped by Tibetan women, who want to sell some of their crafts. They probably come from one of the surrounding Tibetan refugee camps. Closely packed, and as an almost subculture in the Nepalese community, these refugees live without citizenship and completely without rights. Despite this, they welcome visitors with open arms, and for a modest amount one can be shown around in one of these refugee camps. It is one of the more meaningful and insightful ways to get away from the touristy Pokhara. 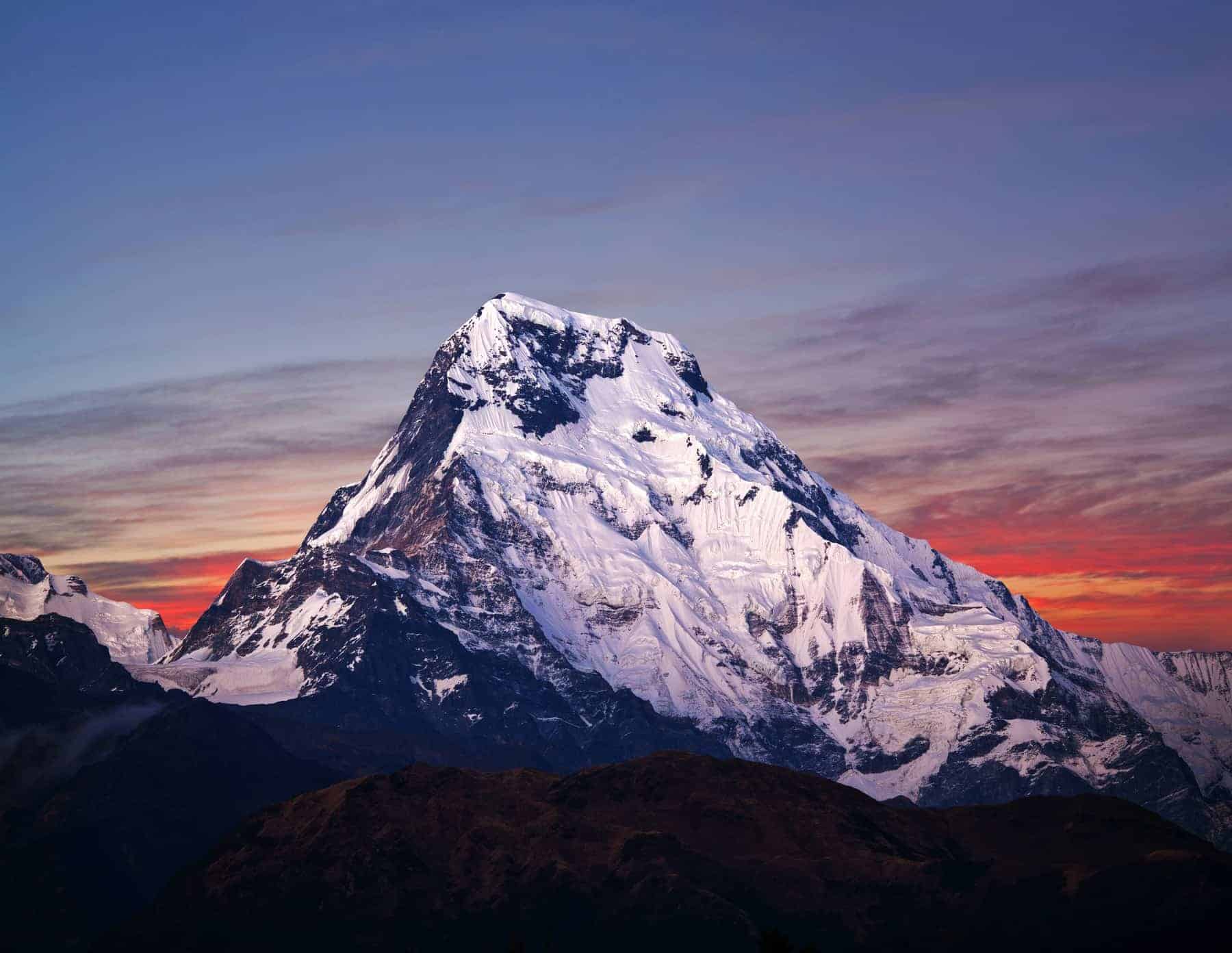 You can do nothing but relax and shop in Pokhara, and one of the city’s main attractions requires nothing more than a platform high up – and otherwise just an adventurous traveler. You can read more about paragliding in Pokhara.

Pokhara can easily act as a host city for a single night at the start and end of the hike, but if there are a few days left in the calendar, they can rightly be used in this laid-back city, which offers opportunities most travelers would enjoy.

Paragliding in the ultra heights of Nepal

Paragliding in Pokhara, Nepal? Because you can, if you dare. Paragliding is the big attraction in Pokhara in Nepal, and after trying it, it’s easy to understand why people fall in love with this great adrenaline rush. After seeing the snow-covered mountain…
AdventureNepal

Garden of Dreams in the capital Kathmandu in Nepal

Kathmandu, a city to be explored Whether you have a single day in Kathmandu, before your hike to Nepal fairly high mountains, or you have a full week to explore the premises, it’s hard not to find charming streets, beautiful temples, and…
AdventureLaos

Zugspitz is about real mountain biking The Zugspitz area is an Austrian paradise for mountain bikers, hikers and mountain climbers. Sometimes it would be better to be a mountain goat, you may think, as you gasp for air in plus 3000 meters,…
AdventureNew Zealand

Amazing Waitomo glowworm caves in New Zealand An absolute top post on the “must-see” list on New Zealand’s North is the Waitomo Glowworm Caves. Waitomo is a Maori word and can be divided into “wai” = water and “tomo” = hole or…
AdventureSingapore

Kayak excursion in the mangrove outside of Singapore. Dugongs included.

Singapore kayak trip? It is our suggestion for you who have traveled to Singapore and are a little tired of seeing only big city landscapes or just want a nature experience and some not too strenuous exercise in the fresh air. Ask anyone…
AdventureFiji Islands

Bula Bula Fiji When I landed back home well over a month ago, the first sign that I was home from Fiji was that there were no cheerful guitar players welcoming me to the airport and on the street, I was not…
AdventureBali

Bali and the hidden treasures of nature

Bali from pristine beauty and innocence to now Tripadvisor’s users have voted Bali the world’s best travel destination. And for the first time have included the category “islands”. It is amazing and really good for Bali’s tourist industry that the whitewash and…
AdventureBrazil