Amazing Northern lights near the Polar Circle in Norway

Northern lights north of the Polar circle in Norway.

To the far north in the lightly populated and somewhat deserted Troms county, lies one of Norway’s absolute gems – Tromsø. The city is internationally known for being one of the northernmost located cities in the world with more than 50,000 inhabitants in the Arctic area with its own cathedral as well. (In fact, just over 70,000 live here). The city also has plenty to offer: culture, history and unique nature, although the area is probably best known for being one of the best places on the planet to observe the amazing natural phenomenon of Northern Lights (Auora borealis). In other words, Tromsø is something special and worth visiting. 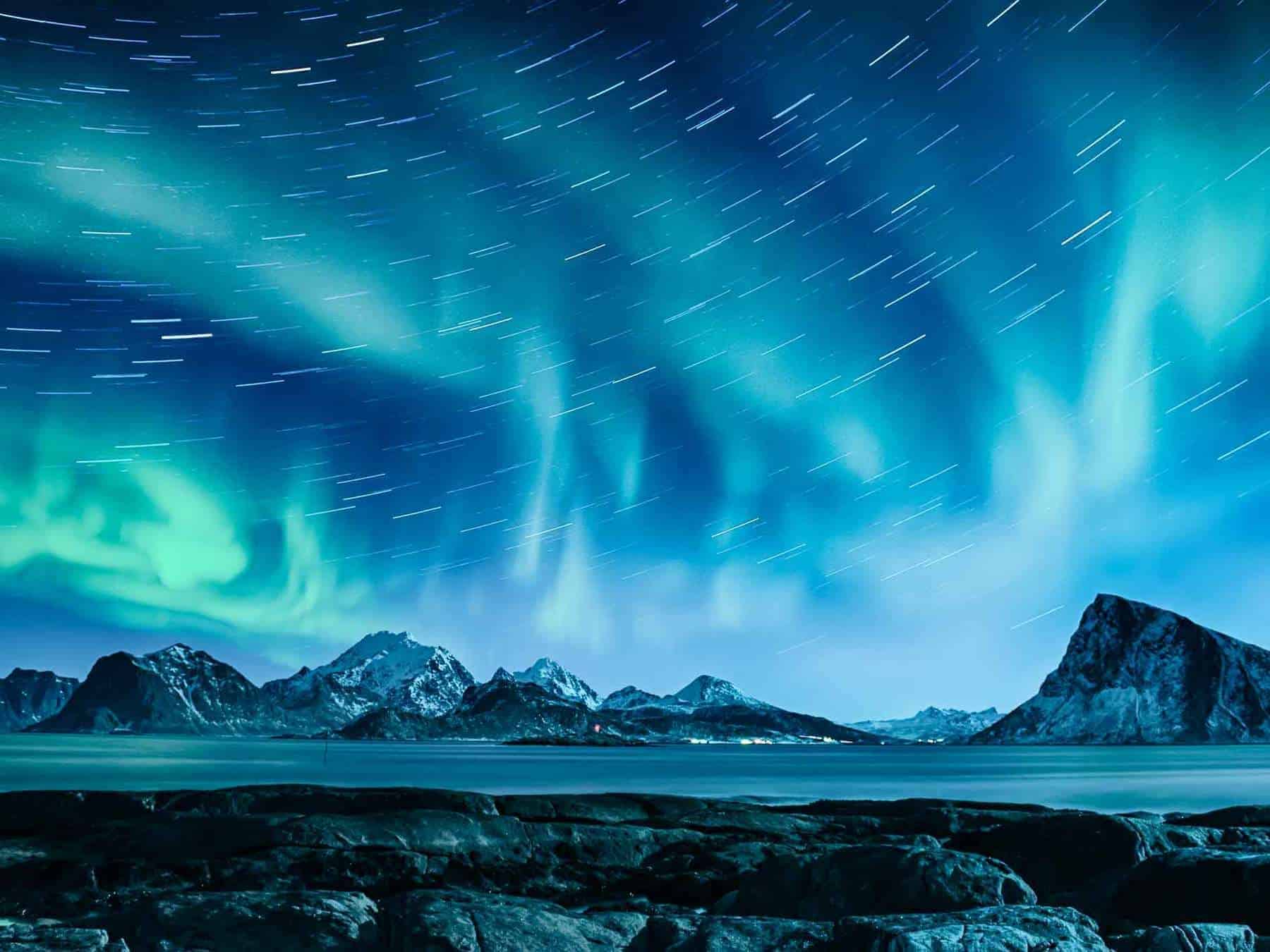 When electric particles dance at night

Although the impressive Northern Lights may seem like a natural phenomenon of another world, the Northern Lights in the Arctic consist of “just” electrically charged particles from the sun, which hit the Earth’s magnetic field and collide with the Earth’s atmosphere. This process releases the energy that forms the colorful light that shoots across the night sky. However, this does not change the fact, that you enter a dreamland when you are at the top of one of the surrounding mountains around Tromsø and are surrounded by the city’s lights below and astronomical green waves of light above.

Tromsø lies within the so-called Nordlys oval in the Arctic, an area where northern lights are observed more and more often.
As Tromsø is one of the only cities of a certain size within the oval, it also means that the city can house, feed and entertain large amounts of tourists during the daytime, when you do not hunt the green rays in the late-night hours. In this way, the city itself is a suitable stop on the road to the northern lights.

Since the Northern Lights can be difficult to see from the city due to their light, it is strongly recommended that you look away from streets and alleys when you want to see the northern lights in their best shape. Here it is recommended to climb the nearby mountain, where at the top you find the restaurant Fjellstua. From here you get a fantastic view over the city and over the night sky. The mountain can also be climbed with a cable car from the foot of the mountain, which, however, may cost a little money.

Arctic Cathedral in Tromso city in northern Norway. Tromso is considered the northernmost city in the world with a population above 50,000.

With its approx. 70,000 inhabitants, Tromsø is comparable in size to Danish cities such as Esbjerg and Kolding, (if that helps) and is therefore not a mecca for the tourist seeking a big-city break. However, the city is filled with classic Norwegian culture and architecture, and the center is cozy in its own way. From the city, you can choose several guided tours that can be seeing whales, dog sled tours, or Northern Lights tours. If you are in Tromsø at the time of the year when the Northern Lights are most active (October – November, and February – March), there is probably no need for guided tours, as the Northern Lights can be seen most of the nights of the week as long clear skies.

As the city is a university city, the amount of young people is large, which can be seen in the range of restaurants, nightlife, and shopping opportunities. In addition to the city center, the city’s botanical garden close to the university and the city’s Arctic cathedral is also worth a visit. If you are interested in sports then the city also has 2 major football clubs: Tromsø IL, which plays in Norway’s best row, as well as Tromsdalen UIL playing in 1st division.

Due to Tromsø’s somewhat remote location and size, you can come on beautiful walks, no matter where you live in the city. If you are not game for a very long trip, there are nice walks on the Tromsø island (the island where most of Tromsø lies). Besides that, it can also be strongly recommended to walk into Tromsdalen and climb Tromdalstinden. Tromsdalen itself is an approx. 7 km long trip from the center of Tromsø, and does not require lots of exercise. If, on the other hand, you want to do Tromdalstinden, you should be in relatively good shape before you go take on the challenge. Last but not least, there is also a beautiful hike in waiting at Kjølen on Tromsøya’s neighboring island Kvaløya. Here you can take a bus to the foot of the mountain.

Beautiful places in Norway you must visit

Beautiful places in Norway Beautiful places in Norway, the westernmost of the Scandinavian countries. Norway is home to countless natural wonders and supernatural landscapes. With its dramatic mountains, glaciers, spectacular fjords, and waterfalls, it is a dream destination for many outdoor enthusiasts. Visit Norway main page In addition to...
Package Tours Travel News

TourRadar for booking adventure tours from global travel agencies This is the world’s first Adventure Booking Platform, where you can effortlessly book private, group, and tailor-made multi-day organized adventures from 160+ countries around the world. With TourRadar booking multi-day tours is seamless and timely Traditionally, booking an organized tour...
Georgia Adventure Travel

Georgia cave dwellings from the Iron Age. Georgia's cave towns are rightly famous. There are very few real cave dwellings in this world. One is located in Basilicata in southern Italy and another in northern Sudan in almost desert landscape, but on UNESCO's exclusive shortlist of conservation and worthwhile...
Adventure Travel Argentina

Iguazu Falls,  275 waterfalls over a full 3 km stretch. The waterfalls are hard to imagine: 275 waterfalls (drops) that accumulate over a 3 km stretch and fall from a height of 82 meters, which corresponds to a 24 story high building. Water beats hard from that height. Worth...
Nepal Adventure Travel

Pokhara, last stop before the Himalayas

Pokhara in Nepal Pokhara in Nepal is usually just a stop on the way to a longer hike, but there is certainly no reason to cheat yourself for the delights hidden in this exciting and cozy town in Nepal. Most visitors to Pokhara are people who are either on...
Travel Adventure Travel

Adventure travel to Canada from coast to coast Adventure travel to Canada takes place in a great country leaving life-lasting travel memories. Canada offers magnificent nature such as the Rockies and fantastic cities such as Vancouver and Montreal. https://youtu.be/EIfxBr6bLN88 https://youtu.be/EIfxBr6bLN8 Canada defines a travel category of its own: In...
Ireland Travel

Top 10 Places to Visit in Pakistan Visit Pakistan? Pakistan has been in the news quite often. The at times challenging relationship with "neighboring countries" is sadly what mostly makes the news. It is sad for the countries on both sides, cause there is so much more to the...
Asia Maldives