Montreal as seen from Le Plateau, the place to visit

Montreal seen with young Scandinavian eyes: “The planning of my stay in Montreal dealt with finding out, what to experience in the city, and not least where I was going to stay. Basic stuff. Plans are, as you know, to be changed, and a few days in Montreal both my plans and my perception of the suburban part of the city, I had found a room in, changed a lot.

Like most other cities in North America, Downtown Montreal is characterized by high-rise buildings and exclusive shops. Large parts of the central Rue St. Catherine is closed to cars during the summer, giving cafes and shops the opportunity to move the business outside – and allow the recurring giant chess games to take over the street again.

The cozy center of Montreal differs from other big cities by, among other things, having an old and extremely charming neighborhood, which dates back to the 17th century. Here the cityscape is much less marked by large shops and chains, and instead provides space for the small, local and independent shops of all kinds. Situated close to the old harbor, the city’s tourist center is well connected, and here the possibilities of the city are wide-ranging, among other things ziplining, trying the Ferris wheel and eat from stalls with local specialties.

Like any tourist, I immediately sought Downtown, but I quickly learned that the city’s rough diamond hid in another neighborhood. When, after a day as a tourist, I walked toward my room a few miles from the center, a slow but clear shift away from the mainstream shops and glass facades. The stores transformed from housing expensive clothes and accessories to a markedly larger selection of recycled clothing, quirky finds, and unique cafes. Without knowing it, I had found a room in Le Plateau, just off the Mile End; the hippest areas of Montreal right now. 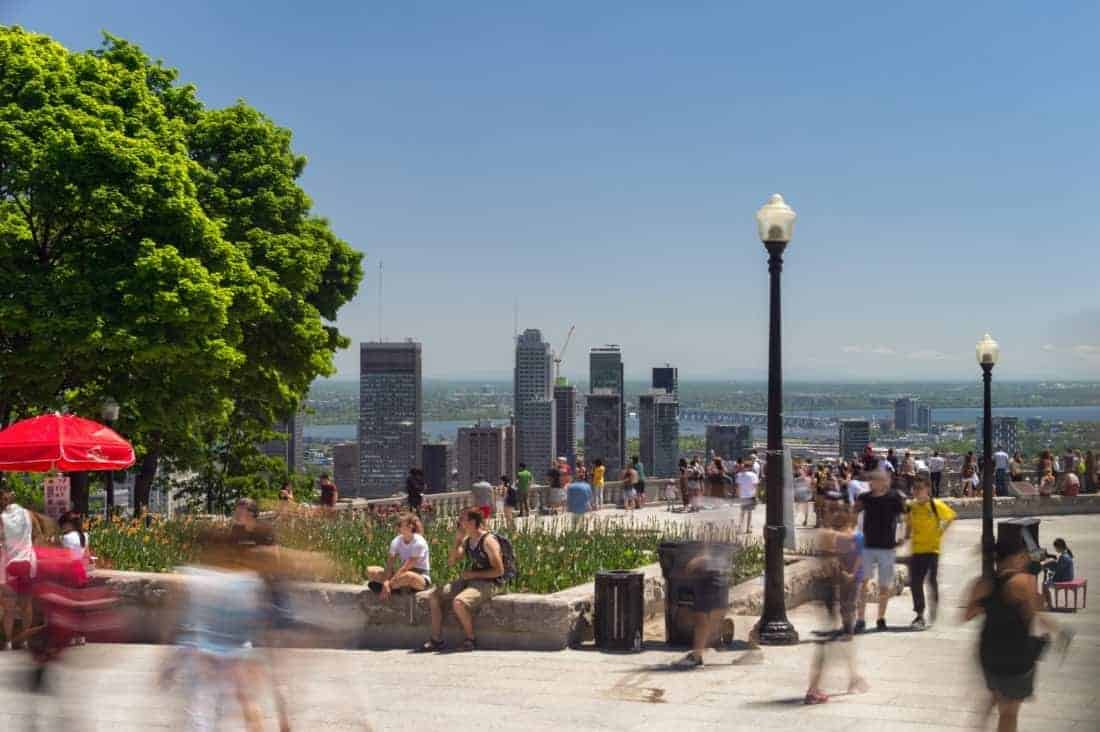 Visually, I was assured that I was in another district, as the street was filled with colors. As I got further out of Rue Saint Laurent, the rule was more than the exception that the gables on the area’s buildings were painted in stunning colors with a bold mix of political messages and fun, symbolic drawings. Art, in general, occupies a lot in this area of the city, which also houses several galleries and pop-up shows. On Rue Roy, I saw an improvised play with the road as the only backdrop. One played on trumpet, one on the accordion and the last two delivered a  street play on books influence on man´s evolution in an audience-engaging piece, eagerly asking people to follow along the way to experience the rest of the story.

Rue Roy is one of the places where it is obvious to use the road as a backdrop. There are several nice tall beds with herbs and colorful installations on the pedestrian street. It also houses the cozy Else’s bar – which was started by a Norwegian woman back in the 90s, and definitely worth a visit. Once you’ve got a taste for what Rue Roy stands for,  you just want more. Avenue Duluth is fortunately nearby; as an older brother or sister, Duluth holds the same values but on a larger scale. It is a very inspiring street, packed with the kind of shops and restaurants you can’t help but look into and where you always end up buying something. If you follow the road to the north you end up in Parc La Fontane, which can best be described as Montréal’s answer to Central Park. Here people meet on lawns in the shade of tall trees, where the locals meet and relax around the lake. If you go all the way back from Duluth, it is obvious first to stop at Café Santropol, which with its cozy garden, good big sandwiches, and collective / family-like management style welcomes one in a lovely and relaxed atmosphere. You need some more energy because, at the end of the road, Mount Royal is waiting for the entire city to be named.

If you want to climb Mount Royal in the greater Montreal area, you first move through a smaller forest area. It is a very dramatic shift when crossing the major city roads, and suddenly you are in a completely different world, surrounded by trees and rocks that force their way through the surface. The road to the top is a tough walk, although you do not have to be in iron-man shape to cope with it – and the rewarding view is a fine motivation to make the effort. Nature is, in general, a large part of the city and the botanical garden and associated Biodome are unique examples of how nature can come into its own in a modern metropolis. The botanical garden is one of the largest in the world. At the other end of the city, you will find the architecturally exciting Biosphere, which in turn gives nature and the environment an important place in city life. The sustainable approach to big city life is evident in Montreal, and I felt like part of the whole organism when, in the middle of downtown, surrounded by high-rise buildings, I picked me a strawberry from a newly planted meadow. 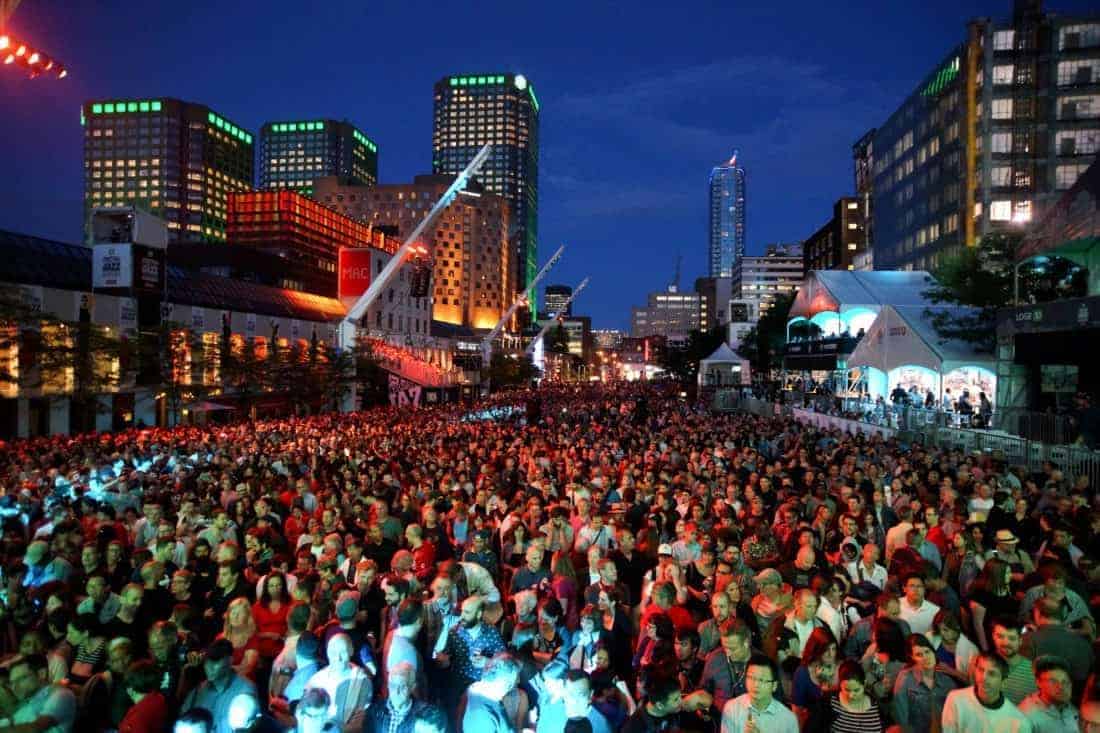 Montreal is a city of festivals, and over the summer one festival pops up after another. It covers everything from the Montreal jazz festival to fashion fairs,  and you can easily plan your holiday after hitting one of these festivals. Whether it is for a festival or not, it is obvious to research the “beer world” when you are in this part of Canada. The micro-breweries shoot up everywhere, providing a wide and exciting selection of beers. Montreal boasts a lot of the qualities you would expect from a big city, and with its many museums, amusement park and underground city (a 32-kilometer long web if of roads beneath the city, with associated shops and metro stations). Montreal; I will be back.”

Book your trip to the Canada

Do yoga while the eagles soar over your head  in Nova Scotia Yoga seems to attract the off the beaten track locations for retreats. Someplace calm and beautiful. Nova Scotia on Canada’s long east coast lies along the Atlantic coast, which is…
AdventureMexico

Ryder Cup will be held in Wisconsin, USA 2020

Where is Ryder Cup 2020 played? Who are the captains? The Ryder Cup will 2020 be held at Whistling Straits Golf Club in Kohler, Wisconsin, USA. We invite you to come back often here at read more about Ryder Cup and golf places…
City ​​BreaksUSA

Seattle, the locomotive of the West Seattle has much to offer including an awesome selection of restaurants (need we say fish and seafood, in general, is superb) and cafés. See what the New York Times experienced in only 3 days visit. I first…
Ski vacationUSA

Jump on a cruise holiday, from Florida to the Bahamas

Cruise to the Bahamas from Florida. (Two girls from Denmark studying in Florida needed a few days break)We studied in Florida and had a week off before returning to Denmark. My girlfriend and I needed a vacation badly and wanted something different….
AdventureUSA

15  places to visit on your vacation in the United States in 2020. 15 top places to visit in the US? The country of all possibilities, the USA is one of the most challenging, when it comes to choosing where to spend…
Diving vacationMexico

Visit Cozumel, Mexico’s largest island with lovely beaches and a diving paradise. Cozumel is Mexico‘s largest island and 53 km long and 14 km wide. (See the map below). It is famous for so many blinding white and quite different beaches and…