The Holzmarkt in Berlin, a quirky village – and an alternative, creative solution in the heart of the city

The Holzmarkt in Berlin is the latest creative development the city has to offer, located at Holzmarkt 25, with views of the city skyline. Until just a few years ago, it was renowned throughout Europe as the place for techno lovers to party! But a lot has happened since then. Since its humble beginnings with just one wooden shack on the River Spree in the mid-2000´s, it has now been transformed through the efforts of a number of innovative entrepreneurs into a village within the city, still evolving, for those who value a creative and alternative lifestyle, and those who come to enjoy the fruits of that creativity. 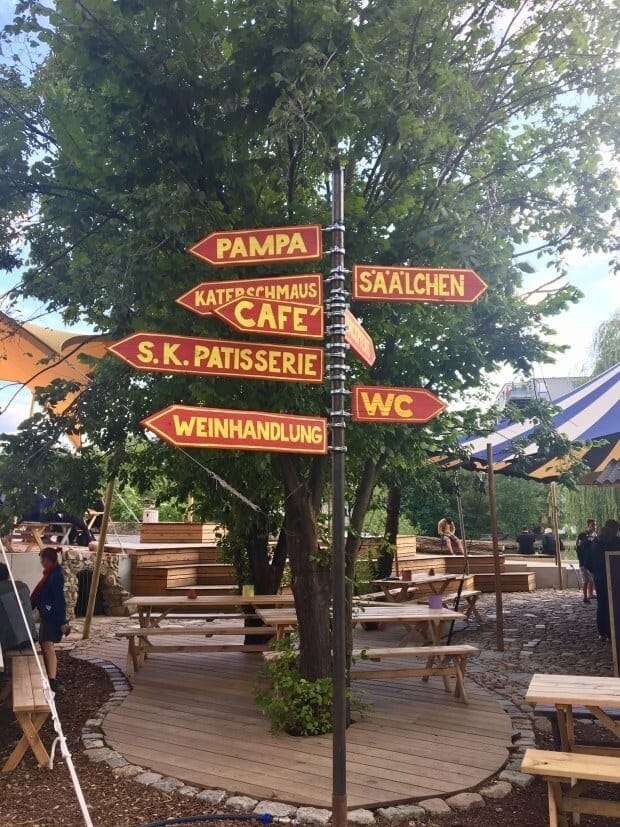 At the present time, about 20 different projects are under development including art galleries, cultural facilities, restaurants, food outlets – and even a kindergarten.

This is urban farming, live music – local bands are given the opportunity to perform live, and beach bars, cafés, bakeries, workshops and training for artists, a yoga studio, language courses, and a dance school, clubs, and a variety of events are all there for the choosing. In other words, something for almost everyone – and these days, it´s not just for the kids. It´s a place where all generations can spend an afternoon out together in a laid-back atmosphere with lots of new things to explore. That is what the entrepreneurs behind the Holzmarkt project hope to achieve as it evolves – an alternative to the more commercial areas of the city. 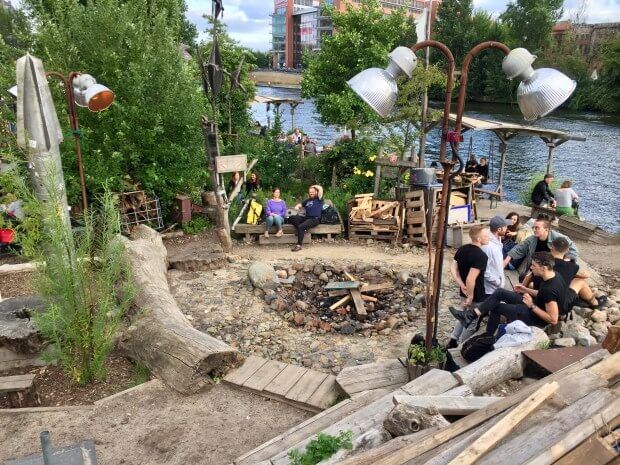 The Holzmarkt has become a meeting point for everyone in Berlin

The Pampa beach bar was already a well-known spot and since it opened a couple of years ago, it has built up a regular clientele of Berliners and tourists alike who come to chill-out to the music and enjoy a snack or a drink on the weekends.

Today, its focus is more on creating an experience for the whole family, with a sandbox for the kids, and burgers, pizza and ice cream on the menu – not to mention the chance to learn how to make your own pizza.

Beside the restaurant is a small area where you can watch the beavers that live on the banks of the Spree – another pretty unique experience!

In the evening, DJs get the place rocking on weekends, while events such as swing evenings, new book releases, films and debates are often scheduled on weekdays.

Who are the innovators behind the Holzmarkt in Berlin?

The organization behind the overall project is the Genossenschaft für Urbane Kreativitet. It is a cooperative whose aim is to encourage creativity and sustainability in urban development.

The members of it are a mixture of creative talents, experienced and financially adventurous business angels, and those who have an innovative understanding of city planning. The cooperative owns the land, and are responsible for developing the facilities, buildings and so forth – and are involved to a lesser degree in the individual projects that are housed in the premises.

The long-term objective is quite simply to generate revenue for the cooperative that will secure its future and ensure its sustainable development. 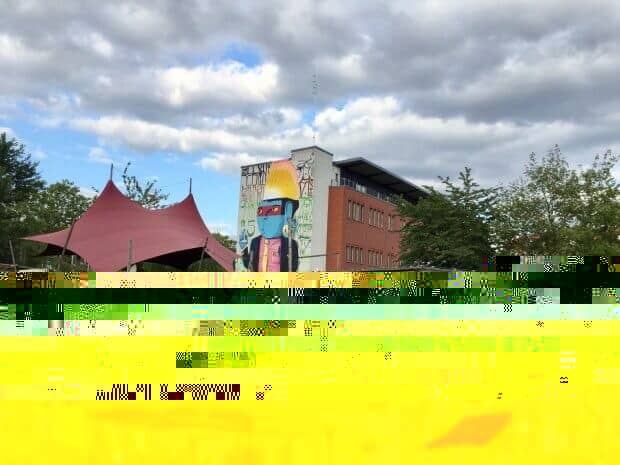 The dream of an alternative, sustainable city development

Several of the involved parties have expressed their frustration over seeing that already after just 5 – 10 years, areas that have been renewed and gentrified have become too expensive for the locals to afford.

In recent years, the bars of Friedrichshain along the Spree have been driven out by urban development projects. The Yaam, a few hundred metres further downriver has managed to survive, but otherwise the banks of the Spree are now more or less occupied by new urban developments.

The Holzmarkt in Berlin has been created based on a model that, at least on paper, is designed to ensure greater variety in the development of the area, and the Genossenschaft für Urbane Kreativitet have made this the cornerstone of their manifesto. 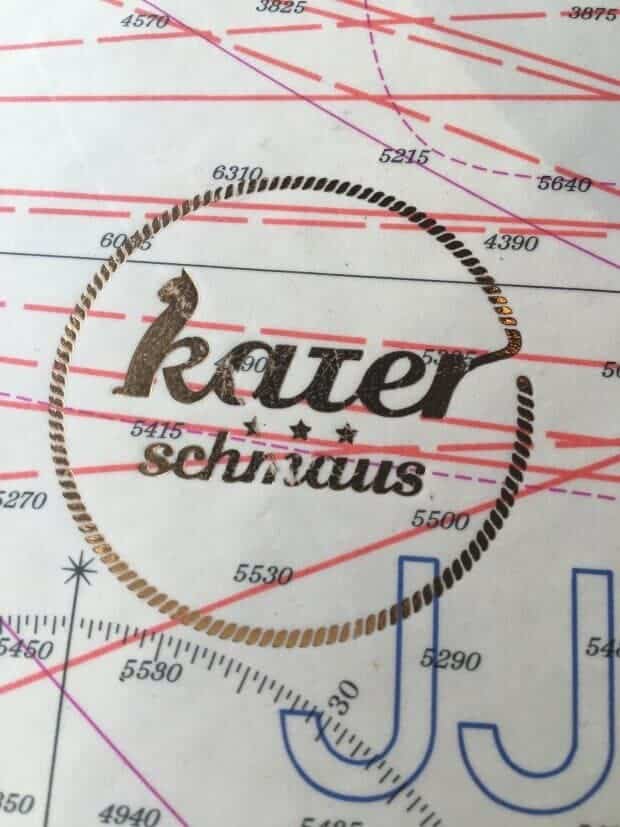 The Katerschmaus – gourmet dining in the heart of the oasis

The Katerschmaus Restaurant is a chapter all by itself, and another highly creative interpretation of what a haven can be in this village oasis within Berlin.

Here, the funky decor and cozy atmosphere are designed to bring the guests closer to each other and closer to the food. In the summer it also offers to dine out on the terrace along the banks of the Spree. The food and wine are in a class of their own, and no effort is spared to offer guests the absolute best in raw ingredients, and top class preparation and serving. A gourmet dining experience in fantastic surroundings. 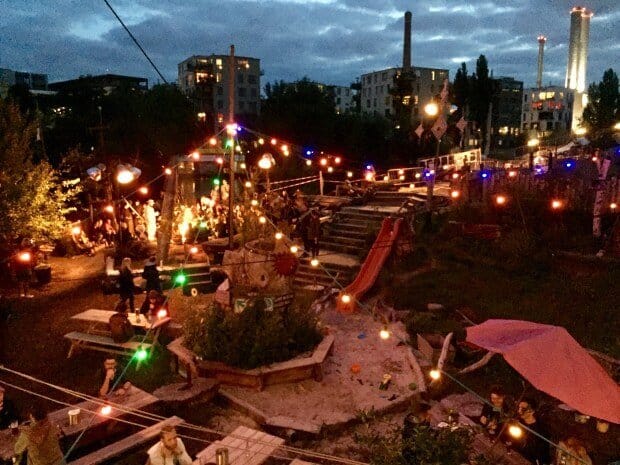 Is this just the start of things for the Holzmarkt in Berlin?

There is no doubt that the creative forces involved in the project are among the most talented and professional in the business.

The whole set up, food and way it is organized and their communication style about the projects reflect the latest models of start-up companies which aim to generate revenue based on sustainability.

In addition, the project aims to give something back to the city, and plans to do so by offering something for everyone:

Facing Holzmarkt Strasse, there will be student accommodation for 400 young people and the plan is to build a hotel at a later stage. Pathways with public access will be laid out along the Spree and throughout the whole area for everyone to use. Add to this a new platform for Berlin´s artists to develop and exhibit their talents in this new environment and different projects and you are beginning to get the picture!

It will take a few years yet to develop all the facilities that are planned for this area, but that´s all part of the overall experience – being in the midst of the growth of this unique undertaking and watching it unfold.

On the surface, things may appear to be haphazard, branching off in all directions, creative yet chaotic, in the style of RAW or YAAM. But hopefully, the Holzmarkt is just a taste of what´s to come, an example of what Berlin can achieve and the creative and spontaneous direction it can take using a model that will drive more long-sighted and sustainable development.

But no matter which theoretical model it chooses, and despite the scepticism sometimes expressed in the social media, nothing can change the fact that enthusiastic and creative souls have taken it into their own hands to get things moving in Berlin – and in doing so, have given the city one of its coolest places to meet.

Turning the roof of a boring parking lot into a cool café – that´s ecology Berlin-style! Ecology in Berlin? And with a name like that? “Warum nicht”! Well, yes, why not? This warrants a closer look for sure: At the top of the…
City ​​BreaksGermany

Compelling reasons to go to Brussels in Belgium on vacation Let´s dig right in, we are in Brussels, the unofficial capital of the European Union, where  Savoir Vivre is in sharp contention with Paris. Officially Brussels is the capital of a number…
ChinaCity ​​Breaks

Visit Macau, a James Bond-like adventure Macau is an independent part of China since 1997,  with almost the same government system as for Hong Kong. Macau is placed at the very southern coastline of China by the  Pearl River Delta and only…
City ​​BreaksSpain

Palma is jet skiing and old history in a wonderful mix. Palma de Mallorca is the capital of Mallorca for approx. 1 million people, and also the home of the airport,  most of the 15 mills. annual visitors arrive by with certainty. It…
City ​​BreaksPhilippines

Manila, the growth is astounding

Manila, a metropolis with great contrasts Manila in the Philippines is home to at least 16 million people and is known for its contrasts between rich and poor from luxury hotels and giant malls on a scale we do not know at…
ChinaCity ​​Breaks

Beijing, a metropolis with 3000 years of history. Beijing is the capital. The city is enormous, growing forever, and the number of inhabitants has exceeded 22 million. With over 22 million inhabitants, the city is surpassed by Shanghai with its over 25 million…
Air FranceCity ​​Breaks

Paris is the city of cities France’s capital is located in the world’s leading tourist country and is known worldwide as the “city of cities”. It’s not bad branding and it promises a lot that Paris can keep most of. You can…
City ​​BreaksSingapore

The newly restored Raffles Hotel reopened Raffles Hotel Singapore is now officially reopened, with an expanded suite count of 115. Take a look at what’s new, amidst the striking architecture, heritage and graceful service of the hotel through the centuries. In the…