Intro to traveling to Holland

Holland, land of the windmills

My own interest in Holland goes far back. My father had visited the country already in 1947, and I have many of his fascinating black and white photos from that time neatly set up in a fine album with precise data and place and date, also people on the journey and purpose of everything. Dutch friends later stated that it was very early to travel to Holland after the war. Everything was just opened after the winning parties’ negotiations after the war, and they told about the country’s fate during the war, which was much harder than say Denmark. Fortunately, Amsterdam was saved completely during World War II.
Later it was my interest in art history that pulled me towards Rembrandt and the museums, and soon after or at the same time growing interest in Dutch football with absolutely festive trips to Amsterdam; we said hello then the soccer star in Europe of the age, Michael Laudrup, who had crowned days at Ajax Amsterdam. Holland is central Europe and you get close access to Germany as a bonus and certainly also Belgium.

“In the beginning, God created the heavens and the earth except for the Netherlands, for the Netherlands created the Dutch themselves” is a comprehensive expression to describe the country’s struggle against the sea. Amsterdam emerged as a fishing village around 1125, when the fishermen built the house at the mouth of the Amstel river, the river that would give today’s Amsterdam its name.
At a time when we feel and fear the carelessness and consequences of climate change, the Dutch have benefited from long-standing expertise in handling the sea in the lowlands of the Netherlands. Dikes and houses on piles as houseboats are just the beginning of that story. Today, this know-how is a treasured export item. 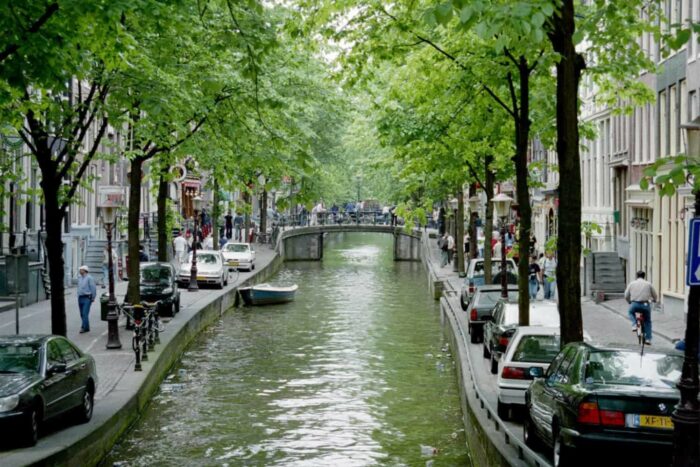 The Netherlands is mostly 6 meters below sea level

The Netherlands has always been a tolerant country. The Netherlands welcomed Portuguese Jews, French Huguenots and Flemish Protestants when they were oppressed in their respective countries. The refugees have greatly contributed to Holland’s economic development, which already flourished in the 17th century, known as the Golden Century. Then came the Dutch East India Company (VOC) in 1602 and the Dutch West India Company in 1921. During this period the culture flourished with masters such as Rembrandt, Vermeer and Jan Steen. 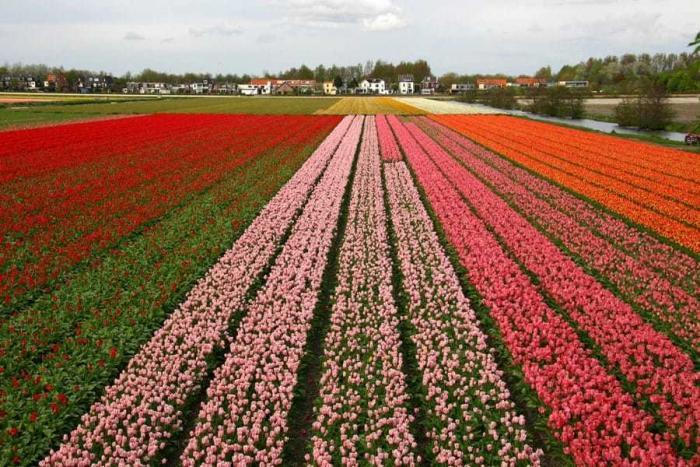 Tulips, one of the world’s first speculative investments

Tulips describe the color of the Dutch landscape each spring and tulips were introduced in the country by botanist Carolus Clusius in 1593 when he imported plants from the Ottoman Empire to the Hortus Botanicus (Botanical Garden) in Leiden. The Dutch tulip mania began back in 1620 when investors paid for rare tulip bulbs with their weight in gold, which forced the prices up until the market collapsed in 1636. Today, Holland’s exports are 6,500 million tulip bulbs annually, generating more than 400 million the year. Every spring, about 1.5 million tourists from all over the world come to the Tulip district to experience thriving tulips.

The Dutch are also large and recognized cheese producers. The story goes back to the Middle Ages when the official dairy and market markets opened. In these places, both the quality and the weight of the cheese were sharply controlled. Edam port alone exported a million pounds of cheese in 1649. This cheese came from producers in the provinces of Noord-Holland, Zuid-Holland, Friesland, and Utrecht.

The Dutch cities of Amsterdam, The Hague and Maastricht can present a unique picture of the country. Amsterdam, the capital of the country, is the economic center of the country and is known for its concentric channel system. The Hague is home to the royal family and the Dutch government and parliament. Maastricht, Holland’s oldest town and located in the Limburg hills, among Roman ruins and caves.

The Netherlands must be experienced from a bicycle saddle

There is something for everyone to see in Holland. Visit the many museums, go cycling through the tulip fields, sail along the Dutch waterway and sleep in a palace hotel. And remember All Dutch speak good English and are very friendly.

Thanks to the Dutch Tourist Office for  inspiration, Much more about the Netherlands to come!

Top designer hotels around the world

Why you should visit Ireland

Ireland. Your Ultimate Ireland Travel Guide Visit Ireland for a number of very compelling reasons: Ireland has a rich culture, captivating scenery, and beautiful landscapes perfect for exploration. From the rolling countryside to the rugged coastline, Ireland is full of breathtaking sights to see. This article highlights some of...
Travel Travel News

Travel to Portugal and the travel tips you need Travel to Portugal the arguably friendliest country in Europe, a sunny place with amazing historic towns and a blinding white sandy yet dramatic rocky coastline, a wine cellar to sample wine from Porto second largest city in...
Turkey Sun and beach

The Turkish Riviera offers an abundance of holiday options The “Turkish Riviera”, perhaps the most beautiful coast in the Mediterranean, stretches over 1000 km from Fethiye in the west to Hatay in the east, close to the Syrian border. The Riviera enjoyed almost explosive growth in tourism some years...
Italy Food and Wine

The beauty of Venice The beauty of Venice is world famous. The number of tourists during summer too many, but a witness to the importance of Venice. No city in the world is quite like Venice. With its winding canals and picturesque architecture, it's a truly unique place. And...
Travel City ​​Breaks