Blue Hawaii was the title of the super corny and very romantic movie from 1961. Elvis Presley simply loved Hawaii, just like Barack Obama and many other celebrities did and do. And no wonder! Let´s hop to Hawaii and get a first impression.

We are way back in time. Blue Hawaii gave a very romanticized picture of a beautiful and untouched island paradise in an innocent time zone. For many at the time it was the first view of an island in Oceania/Polynesia, which they learned about from Mr. Presley himself. The Hawaii islands in the 1960s were very exotic for all people, and unattainable for most people. Times change. 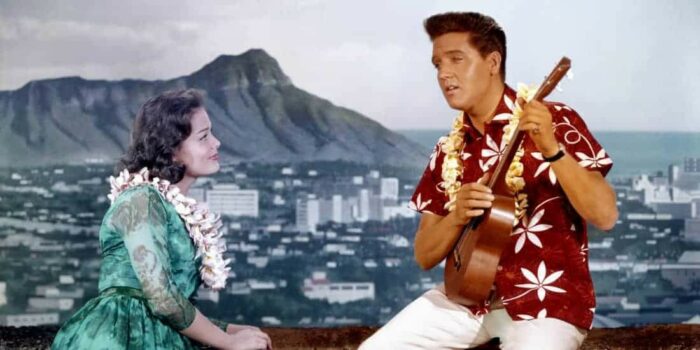 Elvis crooning his way through Hawaii, 1961. The film was shot in 1 month.

The American islands of Oceania have been visited over the years by a sea of other well-known celebrities, foremost actors and politicians, not least of all former President Barack Obama. What’s so appealing about the place? It is American soil, a state in rapid development and that means there are resources for investment in the tourism sector, so you literally find everything worth mentioning. It is not your Robinson Crusoe trip to an almost undiscovered tropical island. It’s comfortable, relaxed and it costs a little.

Ready to surf in Hawaii?

For a more active approach to the Hawaii experience than the private beach of your hotel, you will find a famous surfing paradise here, and the islands contain everything in terms of activities: sailing along the coast, diving, best hotels and excellent food, trekking on mountain paths, hang gliding, cycling, the perfect wedding scene if you are in that mood, golf, tennis etc.

Big Island is not just big, it’s an island that is constantly growing. The island is the youngest in the island chain and also by far the largest, which means that there are extra opportunities to explore the unique wonders that nature has created here. In order to avoid confusion with the name of the entire state, it is often called “The Big Island” and not “Hawaii” and what appropriate name it is. The island is almost twice the size of all the other Hawaiian islands together, and that alone seems inspiring. The dramatic size has created a microcosm of environments and activities that will both fascinate and thrill you. 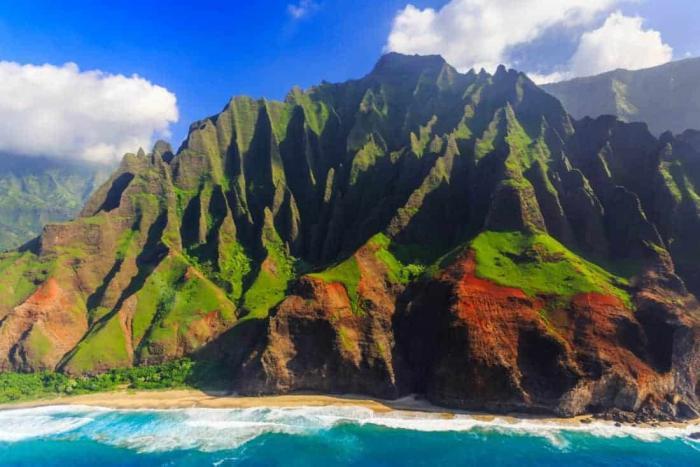 Kauai is the garden island and 4th largest of the islands

Kauai is the Hawaiian Islands’ fourth largest island and Kauai is also called “Garden Island” which is actually a very precise description. Kauai, like the oldest and northernmost island in the Hawaiian chain, is blessed with beautiful valleys, rugged cliffs and gorges shaped by the time of wind and weather. The fertile surface soil on the “Garden Island” is dressed in a breathtaking mantle of emerald green vegetation.

Honolulu, visit the island  and the capital of Hawaii

Honolulu meaning a sheltered place is rooted in authentic Hawaiian tradition and home to a melting pot of ethnicities.  You find this the biggest city in Hawaii on Oʻahu which is the 3rd largest island with a population of ca. 1 mill. Honolulu with a population of close to 400.000 people is a modern city with a unique blend of cultures that serves as the state capital and a gateway to the Hawaiian Islands. You can tour the historic downtown area, surf world-famous Waikiki Beach, shop in world-class stores, hike breathtaking coastal cliffs and dine at five-star restaurants. Best of all, you can do all of this on the same day.

Maui, often considered the most beautiful of them all, quite a title

There are countless reasons why Maui is repeatedly voted “The Best Hawaii Island to visit. A typical first view when you arrive is the sun standing over a sea of clouds on top of Haleakala. See the humpback whales breaking the ocean surface off the coast at Lahaina. Feel ‘The Mana’ from the Haleakala National Park and enjoy the scenic ‘Road to Hana’. As you stroll through the streets of the coastal town of Lahaina and along the beautiful beaches of Kaanapali, you will quickly find your very own reasons for falling in love with Maui. Just like Elvis.

Not far from  Oceania you find Palawan the biggest group of islands in the Philippines.

Palawan – the last of virgin wonders ?

Bora Bora Bora Bora Island is all about true relaxation. The Polynesian lifestyle guarantees it. The Bora Bora people are never in a hurry, and the island certainly represents this laid back lifestyle. Once described as “a small emerald in a turquoise setting,…
OceaniaPolynesia

Easter Island Located more than 2,000 miles west of South America, in the middle of the Pacific Ocean, Easter Island (called Easter Island because it was discovered at Easter) is one of the most remote inhabited places on Earth. It marks the…
OceaniaPolynesia

Biggest Mountains in Asia. A must-read, if you like heights. If you want to plan a vacation in the mountains and something different this time,  but are unsure of the destination, you should consider traveling to the mountains of Asia. When it comes to tourism,…
Denmark