Graz – for pure enjoyment of the senses

Graz is for the enjoyment of life, aren’t we all, little or much?

Austria’s second-largest city, Graz, is the center of life, looking both forward and backward. If you visit Graz, you will experience new and modern architecture as well as lots of concerts and theatrical performances, and you are doing so well that in 2003 Graz was named European Capital of Culture. But at the same time, the city has managed to maintain its traditions, and the old, medieval town center is so well-preserved that it is declared a UNESCO World Heritage. 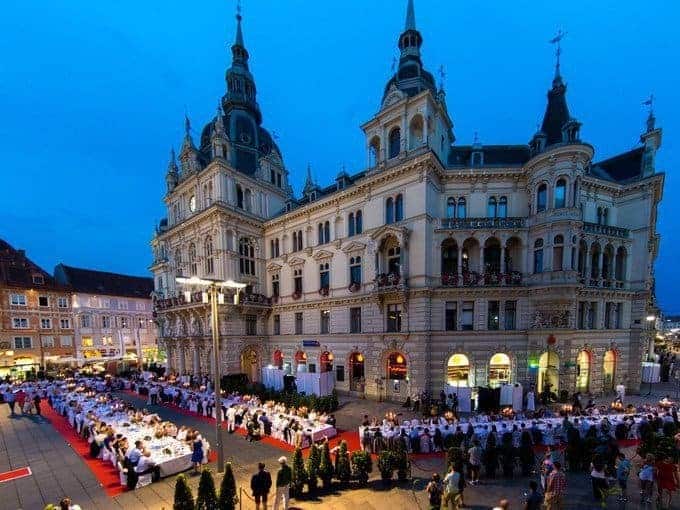 Graz – a capital of gastronomy and wine in Austria

Graz is since 2008 “Genuss Haupstadt Österreichs”

But first and foremost it is the city of pleasure. Since 2008, the city’s official title has been “Genuss Haupstadt Österreichs”, and everyone is welcome to take a seat around the city’s well-covered table with gastronomic temptations. Graz is located in southern Austria, where both the climate, lifestyle and atmosphere are southern European, and on the hillsides you make wines that are known far beyond Austria’s borders. The markets abound with locally grown fruits and vegetables, and if you want to dive into the local gastronomy, every Saturday and Sunday guided walks around Graz. Here you pass markets and specialty shops, and of course the trip ends with a pleasurable dining experience. Another option is the popular Friday tours, featuring tasting and guided tours of a number of Graz’s famous breweries.

Is it a boat or is it an island? Island in the Mur River

In addition to festivals and art exhibitions, Graz is also known for its beautiful and varied architecture. And the contrasts are great. They range from the beautiful Renaissance town hall, built in 1550, to the ultra-modern “Island in the Mur”. In the middle of the Mur River that runs through the city, American artist Vito Acconci has erected a very futuristic building that is a middle ground between a boat and an island – the perfect place to enjoy a cocktail while the water showers by.

So look here, it is Austrian food from famous Kleinwalsertal, that is so good enough both rustic, modern and delicious!

Modern gastronomy in Austria in Kleinwalsertal

Romantic Salzburg for you and your chosen one Romantic and beautiful Salzburg with so much history is quite unique from Mozart to Sound of Music based on a true story and it's hard to imagine anything more charming than the castles, parks, and mountains in the backdrop of Salzburg,...
France Europe

Red Bull X-Alps in the Alps. It's pretty crazy. Red Bull X-Alps adventure sport. It is a cross-extreme sport with a combination of different sports and almost superhuman physical and mental stamina. And you have to be a really experienced hang glider to participate. Also, see the majestic top...
Austria Europe

Granada, the beauty of Southern Spain Granada is a city in southern Spain’s Andalusia region, in the foothills of the Sierra Nevada mountains. It's known for grand examples of medieval architecture dating to the Moorish occupation, especially the Alhambra. This sprawling hilltop fortress complex encompasses royal palaces, serene patios,...
France Travel

Holidays in France:  Perhaps the best French places to visit? Holidays in France are for more people than any in the EU a dream travel destination. Its nature is staggeringly beautiful, its towns are packed with history, and France´s old and historic castles will make you feel like you’ve...
Austria Active Vacation

Zillertal is the perfect spot for an active family summer vacation Zillertal is one of the most visited places in the Austrian Alps during the summer. Here is a number of reasons why. As one of Austria's most popular destinations, summer holidays in Zillertal are a very family-friendly travel...