Best known reasons to go to Glasgow in Scotland? Football clubs such as Celtic F.C. And the Rangers, who otherwise have 9 million fans worldwide for Celtics alone, do not produce the biggest travel results anymore, but previously brought many visitors to Glasgow. Celtics is a club from 1887 with the utmost respect in the country, but no longer ranks as high at international level, so fewer travelers come to the home games from other countries nowadays. But then there is dart! 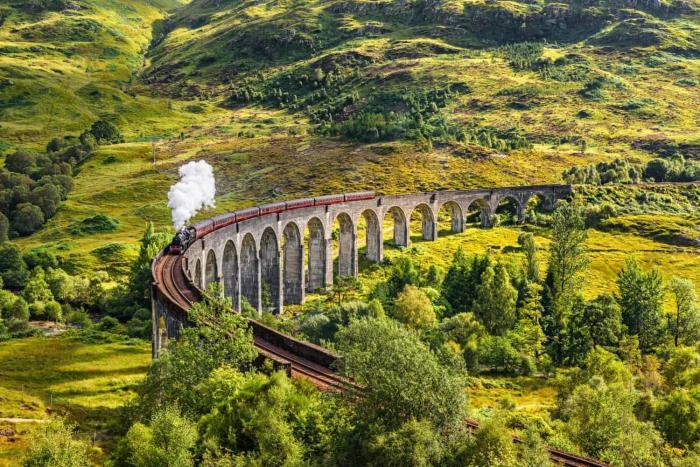 Glenfinnan Railway Viaduct in Scotland with a steam train

London swallows the vast majority of travelers traveling to Europe’s largest island. It is the most beautiful, harsh and loving country, and if you play another sport (yes golf) or a third, (read below) then it is fantastic. After a weekend trip to the country’s second largest city, Glasgow, it was clear that the Scots might not be the worst hosts for a weekend getaway across the North Sea. Rather, on the contrary, they were so friendly and it was good fun. Bonus info: Glasgow is Scotland’s largest city and the third largest in the UK. It is located on the Clyde River in western Scotland’s Lowlands. Now you know.

Trainspotting in Glasgow and beyond

The famous film from 1996 Trainspotting was almost entirely shot in Glasgow and perhaps where most of us got the first glimpse of the town.

Glasgow is obviously a working city. You immediately sense it in the short distances between places that serve Shepherd Pie and Pints ​​for lunch at an extremely affordable price. Most buildings inside and outside the city also have a raw, urban expression and the construction along the city’s river completes the industrial look. The ancient cult film, Trainspotting paints a gray picture of the city and youth of the Scottish working class in Edinburgh at the end of the 20th century. Fortunately, much has happened since then, and the many students at the city’s university provide the city with a breath of fresh air and a lively atmosphere. The gray tones of Trainspotting seem a relic of ancient times after a few hours out in the city’s small streets. Then we killed that prejudice. 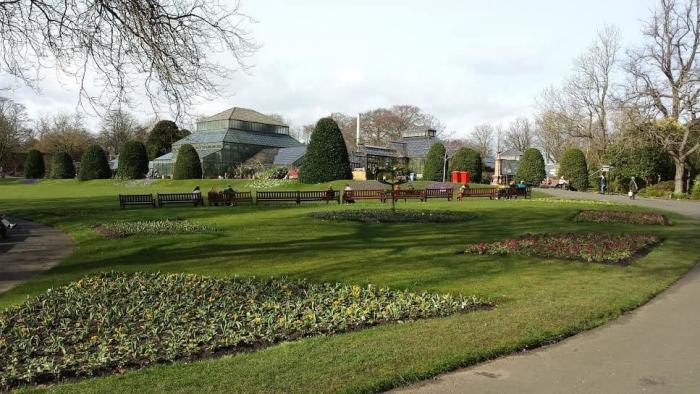 Get to know the Scots – through darts!

The set for our weekend in Glasgow was our passion for darts. A small pub sport in many countries, but huge in Scotland  A visit was made to the SEE Hydro arena, which, with its 13,000 audience seats, houses everything from concerts with today’s pop stars to major sporting events. The SEE Arena itself is a sight for itself.  A large futuristic plastic bubble with a matte, semi-transparent facade adorned with light in all the colors of the rainbow. This time, the occasion was something as Scottish as the Premier League Darts – yes, professionally, the TV-broadcast darts. So when dart fans from all over Europe met up in hordes an hour before the first arrow was to be thrown, one could almost be led to believe that this was a top soccer match. 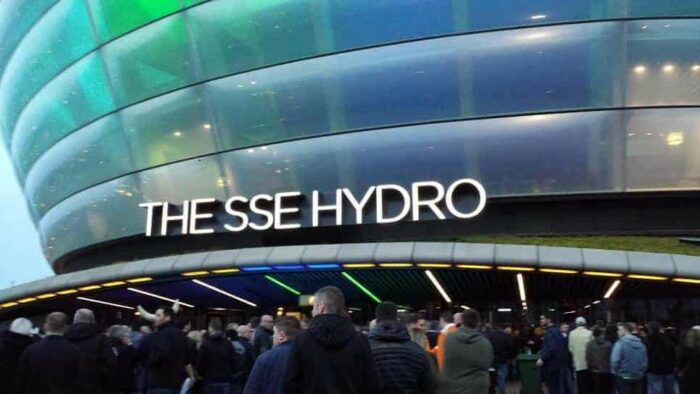 If you really want to experience Scottish culture, book a trip to Glasgow when this circus is in town. Scotland has some of the world’s absolute best darts players. The home audience welcomes them as the biggest boxing stars or pop icons when they make their entrance up the green run towards the dartboard. The home crowd’s reception of their compatriots, however, leaves one with a jumble of emotions in the body. The national feeling floats like the beer in the transparent plastic cups, and you feel included in the enthusiasm. And to the point you forget, that the idea of  13,000 fans gives it all to a pair of middle-aged gentlemen. But armed with beer mugs in one hand and French fries in the other, there is no reason to assess whether the reception is too much or too little; It’s just about taking part in the celebrations. 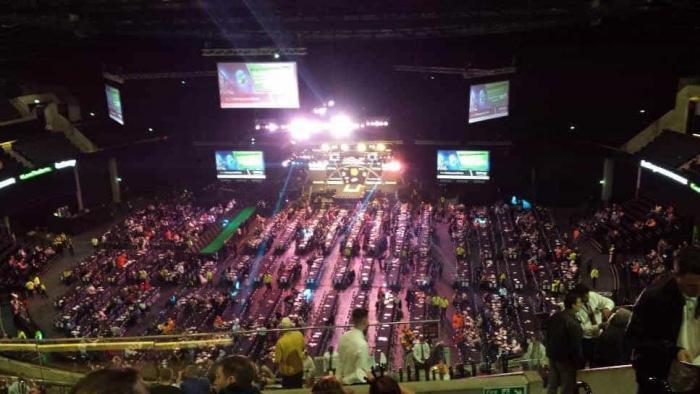 Culture is many things. Next: Glasgow Royal Concert Hall

The darts experience is a party, that most people can participate in.

If you want a bit of finer culture you have to go elsewhere. Inside the city center, it is recommended to take a walk past Glasgow Royal Concert Hall, which was raised in connection with Glasgow’s time as the European City of Culture in 1990. There are regular concerts with classical orchestras and other musical entries. Just outside the city to the west, you find the West End, the fine neighborhood of Glasgow. On the way out from the center, you drive past the Kelvingrove Art Gallery and Museum, which is built in beautiful red brickstone. Here one can, among other things, spot works of legends such as Van Gogh and Monet. The West End, Great Western Road, was built in 1836 during Queen Victoria I. When her reign ended in 1901, it was an area of ​​resurgence, and to this day you can see the characteristic Victorian buildings of the time towers. up around the Great Western Road. This is also where the city’s botanical garden is hidden. In the summertime, there is plenty of life in the garden, which also offers an impressive population of statues inside the building itself, Kibble Palace.

A lovely, affordable trip to Glasglow

Last but not least, it should also be mentioned that the trip to the city is quite affordable; There is an airport in the city, but the trip from Copenhagen can usually be made cheaper if you fly to Edinburgh. From here it takes an hour by bus or train, which gives the opportunity to see a little of the country. Buchanan Bus Station is located in the center of Glasgow, from where it is easy to get on if you want to experience or directly to one of the many good hotels in the city. The Scots are very friendly people with both love and self-irony about their country and people, so there is always help to get if you have lost in Scotland’s second largest city.

Are you ready for more Scotland?

Inverness and the Loch Ness monster in Scotland

Explore Inverness in northern Scotland from sea monsters to cozy pubs Known as the capital of the Scottish Highlands, Inverness is the historic city of Inverness, the starting point for exploring the lakes, valleys and fjords of northern Scotland. The name comes…
Denmark

Amazing Northern lights and the Polar Circle in Norway

Northern lights north of the Polar circle in Norway. To the far north in the lightly populated and somewhat deserted Troms county, lies one of Norway’s absolute gems – Tromsø. The city is internationally known for being one of the northernmost located…
EuropeAustria

Zillertal in the summer is the perfect family vacation spot. The Austrian Zillertal is a 47 km long and beautiful valley where you will find scenery that is so beautiful and activity opportunities so varied, that the Zillertal is one of…
City ​​BreaksPortugal

Lisbon in warm and welcoming Portugal. Lisbon is the charming capital in Portugal, the European country located on the Iberian Peninsula in the southwest corner of Europe. The west and south of Portugal are set at the corner of the Atlantic Ocean,…
GermanyGolf Breaks

Golf Courses in Germany, why Germany is an excellent golf nation. Germany is located in the heart of mainland Europe, sharing its borders with nine other countries. Its location allows Germany to offer golf at many great golf courses and outstanding locations. Germany…
EuropeAustria

Romantic Salzburg for you and your chosen one Romantic and beautiful Salzburg with so much history is quite unique from Mozart to Sound of Music based on a true story and it’s hard to imagine anything more charming than the castles, parks,…
FinlandFood and Wine

Napue: A Gin worth a journey to Finland? Is Napue Gin the world’s best gin? Finland is actually really good at anything with distilleries, which leads to tasty alcoholic beverages. Finland is famous for excellent Vodka. But did you know they have…
Malta

Malta and the brave crusaders

Boracay, among Asia’s most beautiful tropical islands. Boracay island in the Philippines is always among the top tropical destinations in almost every travel list due to it’s pristine white beaches and year-round climate of 25 degrees up. A trip to this beautiful destination, if not…
Canada Health & Fitness

Do yoga while the eagles soar over your head  in Nova Scotia Yoga seems to attract the off the beaten track locations for retreats. Someplace calm and beautiful. Nova Scotia on Canada’s long east coast lies along the Atlantic coast, which is one of the…
Camping Vacation Germany