Extreme sports in Uganda, how did that come about as a plausible travel idea? Here is the story:
“In order to end a fantastic month of safari in Africa and various visits to Uganda, I felt like turning up the pace with a bungee jumping adventure in the Nile. And of course, the trip to the adventure capital in East Africa, Kampala should end with an exciting journey to Jinja! 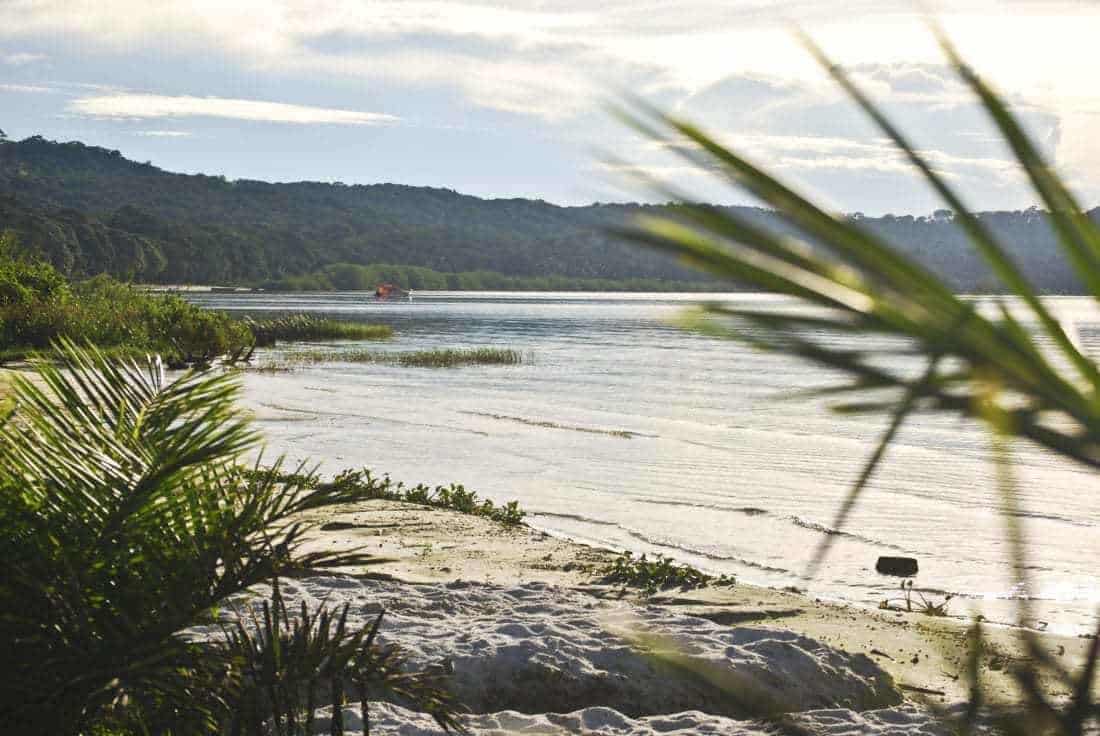 Extreme sports in Uganda take shape. From Kampala to the shores of Lake Victoria in Jinja, Uganda

Located 87 kilometers east of the capital Kampala, Jinja is a relatively accessible place. Located on the banks of Lake Victoria and surrounded by a beautiful landscape, it is an ideal place to go, when you need a break from the hectic life in Kampala or you are not ready to yet another safari or go home 🙂
Upon arrival in Jinja in the morning, we had a couple of hours, before it was our turn to attack the Nile from our red rubber boat. And it was not without butterflies in the stomach, that we walked in circles to settle the nerves before we headed for the Nile.

River rafting on the Nile in Uganda?

And the butterflies were right: before the departure of the Nile, we got an introduction to what we had paid for:  to get out river rafting at level five – out of six. And as they told us, they can not guarantee that you survive level six, so it is not offered. So level 5 it was.

“You’re going to be underwater for longer than you’d like – but do not fight. You’ll get up again. “

A little more than 30 minutes drive later we were seated in our boat – four inexperienced tourists and a local guide, a quite reassuring set-up, The guide, however, takes the ride a few times a day. He gave us a longer instruction including how to deal with falling into the water.
And at the last moment, before he put the oars in the water to take off, he told us that “You will be under the water for longer than you would like – but do not fight. You’ll get up again.”
The water was changing all the time,  as we went from roaring and wild rapids to long passages with absolutely quiet water, where we could even swim. As they said, the crocodiles were already fed, and it was credible, cause there were no crocs in that part of the lake.
The times we fell into the water in the roaring rapids, it was playing out quite as expected; You were thrown around without a chance to fight the strong current, and then it was a matter of trying to remember what the instructor had told us. A very reassuring way to learn things.
The trip went as river rafting runs; nobody got hurt and everyone managed to enjoy the trip completely. You sleep very well the evening after such a trip. 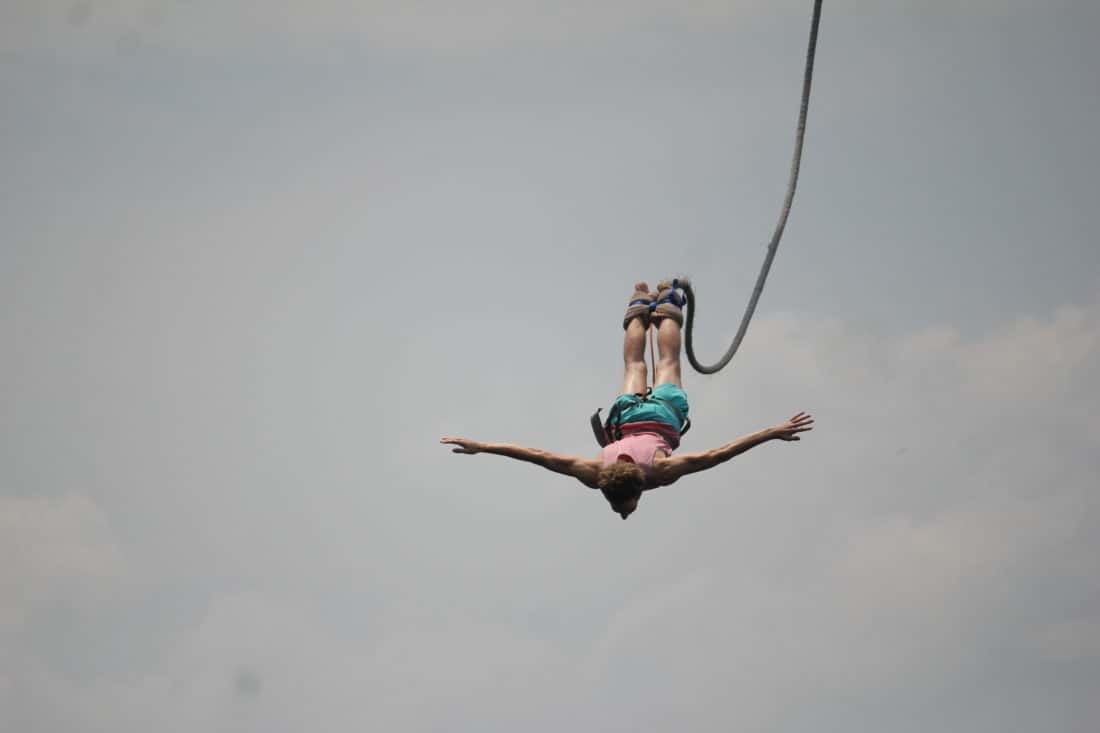 Bungee jumping in Uganda: No going back!

“But I needed more extreme sports in Uganda”

The following day, the Nile would once again host my need for yet another adrenaline kick. This time it was bungee jump in the Nile, beyond the river, with the possibility of being “dipped” – which I said no to. With its 47 meters tall, the platform is running low compared to many other places in the world and is, therefore, a great way to take your first jump.
Nevertheless, it still requires that you are determined to jump when you go up – for 47 meters looks like a lot.  when standing on top and looking straight down.
Incredibly helpful staff made me feel in safe hands when I got the rope around my ankles,  and when I was standing with my toes above the edge of the platform, I was ready to jump – or as ready as you can be. 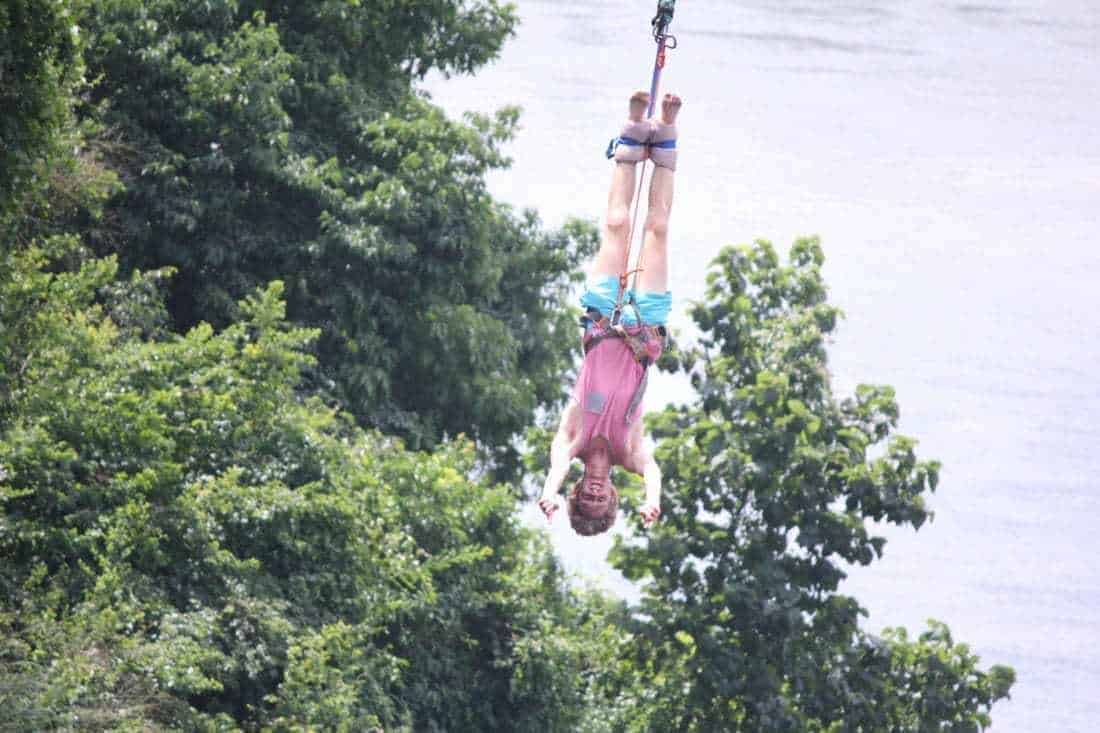 Bungee jumping for real in Uganda

The gratification after bungee jump in the Nile  is remembered forever

After a free fall for a couple of long seconds and an adding a couple of minutes with my head down in the well-known bounces in the elastic cord, I was back home after the biggest adrenaline kick I have ever experienced including paragliding in Nepal. The heartbeat of plus 150  and an aching stomach plus the feeling of overcoming oneself and all your counterproductive instincts, asking you to stop right there and now and never be bungee jumping – was worth it. It’s not cheap to go bungee jumping in Africa, but definitely one of the memorable events on my travels. Both the bungee jumping and river rafting on the Nile are highly recommended!”

The Nile near Jinja in Uganda

Facts about Jinja
Jinja is a city in southern Uganda, with a population of approximately 106,000. Jinja (the name refers to the Nile) is the capital of a district of the same name, located 87 kilometers from the capital Kampala, on the banks of Lake Victoria.

Travel to Sri Lanka, the overlooked South East Asia Travel to Sri Lanka is a good travel tip, one you may never have considered. We would also like to tell you why. Sri Lanka joins an exclusive circle of countries in Asia that are more or less undiscovered and...
Adventure Travel Vietnam

The rose-colored forgotten city of Petra in Jordan Jordan's most famous tourist destination is the rocky town of Petra - which you might know from the legendary adventure movie Indiana Jones and The Last Crusade. And it is one of the world's 7 wonders. The town was carved out of...
Bali Adventure Travel

Bali seen from a helicopter

Bali from the air, amazing video Bali from the air: It is perhaps the best visual introduction to Bali. From wide beaches to narrow coastal gorges and further across the country's green vegetation. It's like being Indiana Jones on adventure. Up, up and away! https://youtu.be/mM-ZNC40aYs Bali from the air...
Sweden Visit Sweden

Kolarbyn Eco-lodge – A true “back to nature” experience Inspired by French philosopher Emile Rousseau’s famous mantra “Back to Nature”, the Kolarbyn Eco-lodge is truly a one of a kind travel experience. Ultra spartan, yet hyper modern, the Kolar Eco Lodge concept is a perfect mix of both. ...
USA Package Tours

15  places to visit on your vacation in the United States 15 top places to visit in the US? The country of all possibilities, the USA is one of the most challenging, when it comes to choosing where to spend your holiday with so many things to do and...