The Vatican in the heart of Rome

The Vatican is located in the very heart of Rome, an independent, city-state within a country, with special privileges as the supreme authority and head of the Catholic Church (with 1.3 billion Catholics).
The Vatican is the smallest country in the world and is situated in the city of Rome, Italy. It’s 2-mile border is completely surrounded by Italy. Interestingly, the Vatican is not a member of the United Nations, but it has diplomatic relations with most countries. The Vatican was founded in 1929 by Pope Pius XI and today it is the headquarters of the Catholic Church. The main attractions for tourists are St. Peter’s Basilica, the Sistine Chapel, and the Vatican Museums. St. Peter’s Basilica is one of the largest churches in the world and took over a hundred years to build. It is located on Vatican Hill, which is where St. Peter, the first Pope, is buried. The Sistine Chapel is famous for its ceiling painted by Michelangelo. And finally, the Vatican Museums are a huge complex of museums that contain some of the world’s greatest art collections, including works by da Vinci, Raphael, and Michelangelo.

An independent city-state in 1929

This catholic state became an independent city-state in 1929, and its head of state is the Pope. The population of the world´s smallest state is around 1.000 and pretty well all of them are employed by the Catholic Church. Here, there´s a bit of everything: a post office, business, a radio station that transmits radio in more than 20 languages, its own newspaper, the whole administrative apparatus, museums, and a book publisher.

From a historical perspective, what is interesting is that Vatican Hill is situated on the opposite side of the River Tiber to the ancient seven hills of Romeo on which the city was built. When the Pope returned from his exile in Avignon in 1377, his headquarters was moved to Vatican Hill and has remained there ever since.

It is a city encompassing 44.2 hectares in the very heart of  Rome, Italy and it is the smallest sovereign state in the world (both in terms of area and population), that is accepted as such by the rest of the world.  It is a monarchical state, ruled by the Pope as Head of the Roman Catholic Church. 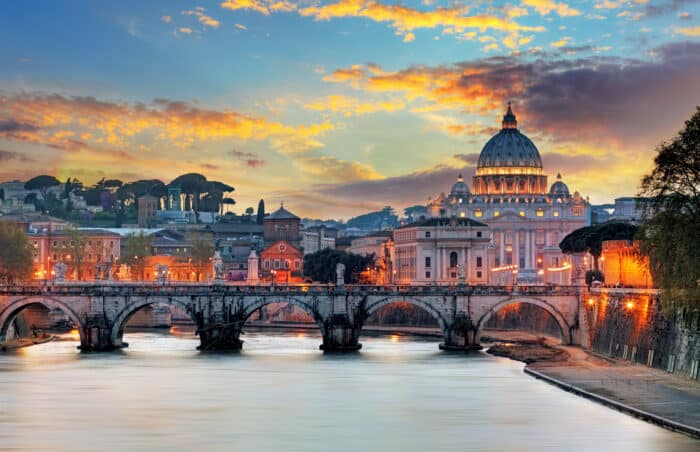 What to see in Vatican in Rome, Italy

What to see in Rome?