Denmark, with just over 6 million inhabitants, is the southernmost country in Scandinavia. 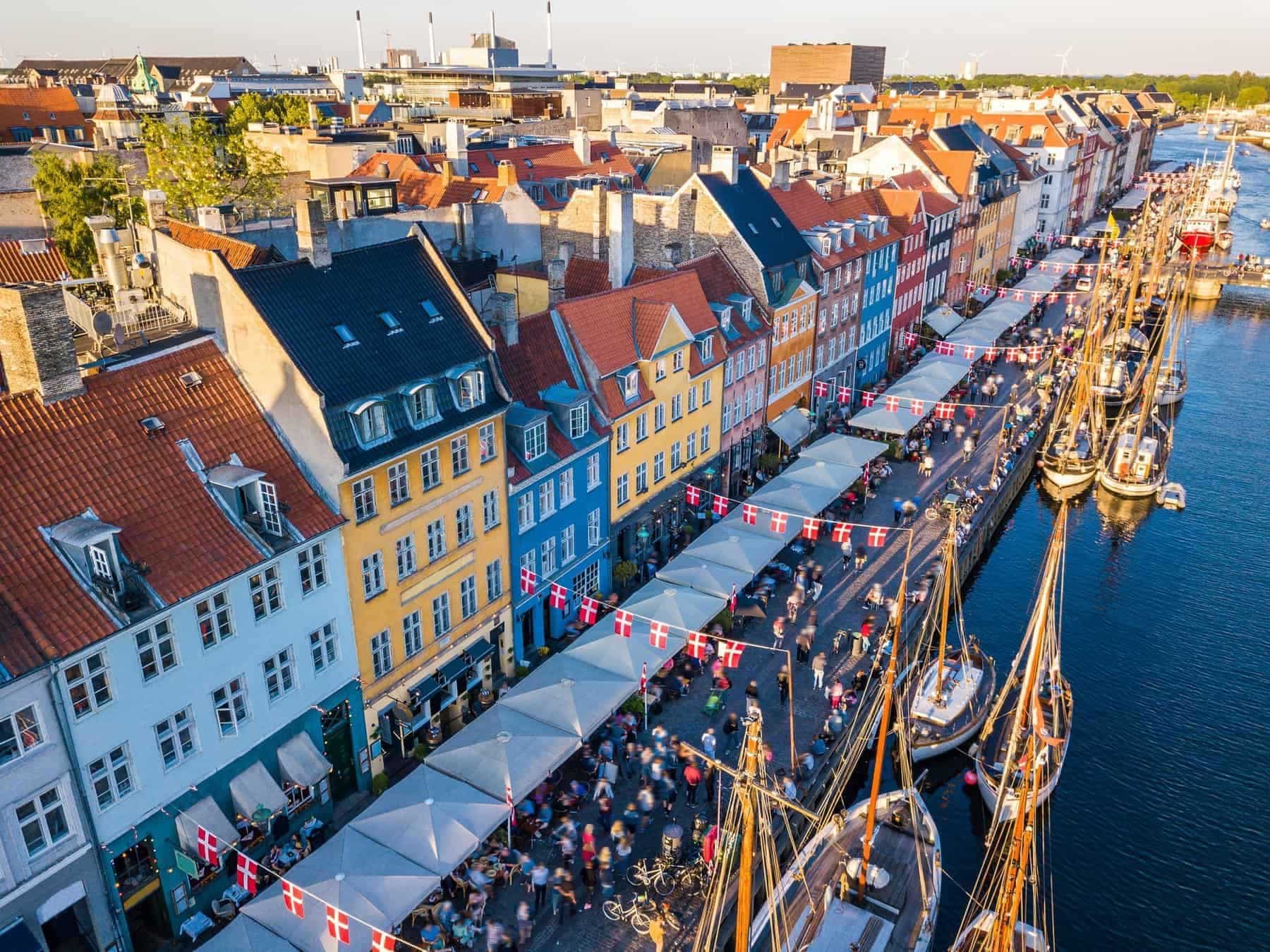 Copenhagen is the major hub for international tourism to/from Scandinavia, but other parts of the country are also popular especially with Germans and other Scandinavian nationalities, particularly during the summer. However, a number of best-selling books singing the praises of Danish ”hygge” or ”cosiness” have put it on the radar of many other nationalities in recent years. A trip through Denmark usually follows an L-shape or right-angled route. Kastrup (Copenhagen) Airport is only 15 minutes from the capital´s city center by car or metro. 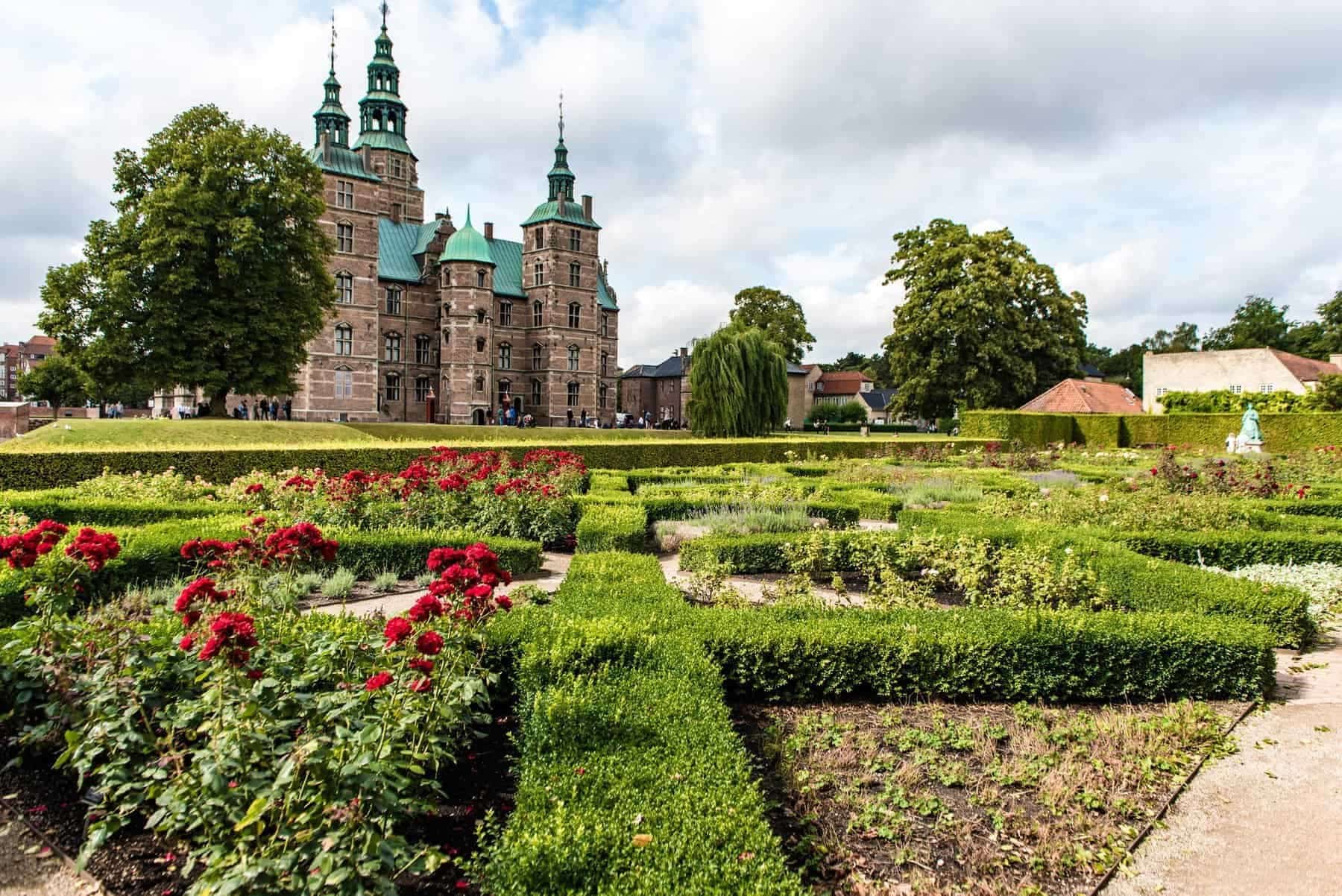 After having viewed the famous bridge across the sound to Sweden (which gained even more recognition following a TV series that has become a hit in several European countries!), crisscrossed the city´s harbour and canals by numerous other bridges, taken a selfie at the Little Mermaid, relaxed over traditional Danish open sandwiches or a plate piled high with fresh shrimp possibly washed down with a glass of chilled aquavit at Café Grøften in the world-famous Tivoli Gardens, and strolled down the main shopping thoroughfare, Strøget, it´s time to move on and travel west across the country´s middle island-Funen to Odense – better known all over the world as the birthplace of Hans Christian Andersen of fairy tale fame. The author´s house still stands there today and has become a small museum full of anecdotes and memorabilia. From Funen to Jutland, you cross the Great Belt Bridge, part of the overland route that now links mainland Sweden with Denmark and the rest of Europe. Completed in 1998, this was the largest construction project in Danish history and the suspension bridge section has the world´s third-largest span. Jutland has many small pearls to visit: Fredericia, with its lovely waterside setting, Julesminde with its calm waters and sandy beaches for summer bathing, or how about the charming timbered buildings and cobbled streets of Ribe or Ebeltoft? There are many lovely towns to choose from, and none are far apart.

As Kirke (As Church) is a beautiful sight with its dazzling white facades towering up to a clear blue sky and the sound of the waves in the background. Not far from here is Aarhus.

Denmark´s second largest city and the cultural and economic core of the region is a thriving university town, renowned for its rock and jazz scene, music festivals, art and cafe life. 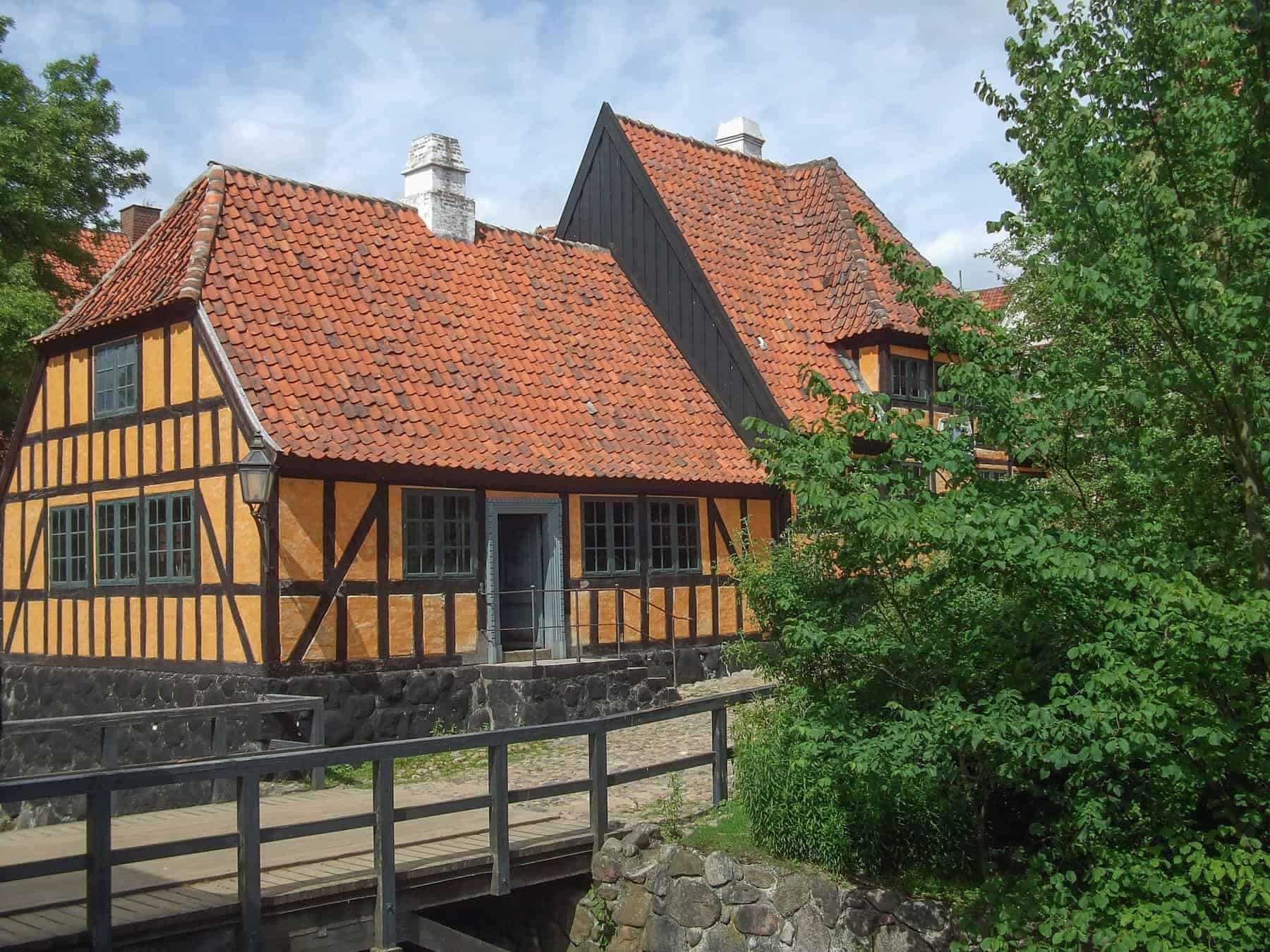 A little further northwest is Løkken, known for being one of the liveliest spots in the country during the summer months, after which it hibernates until the following spring! Not far from Løkken, you´ll find Rubjerg Knude, famous for its sand formations and an old lighthouse. It´s worth visiting this place for the sand formations alone – a sight which is not only pleasing to the eye but will tempt young and old alike to slide down the dunes without a care in the world – nature´s answer to de-stressing. And finally, keep going north and you´ll reach Skagen – at the most northerly tip of Jutland where you can paddle where the waters of the North Sea meet the Kattegat. Also not to be missed is the Skagen Museum which houses some of the most famous paintings of the artists of the Danish Golden Age such as Michael Anker and P.S. Krøyer. 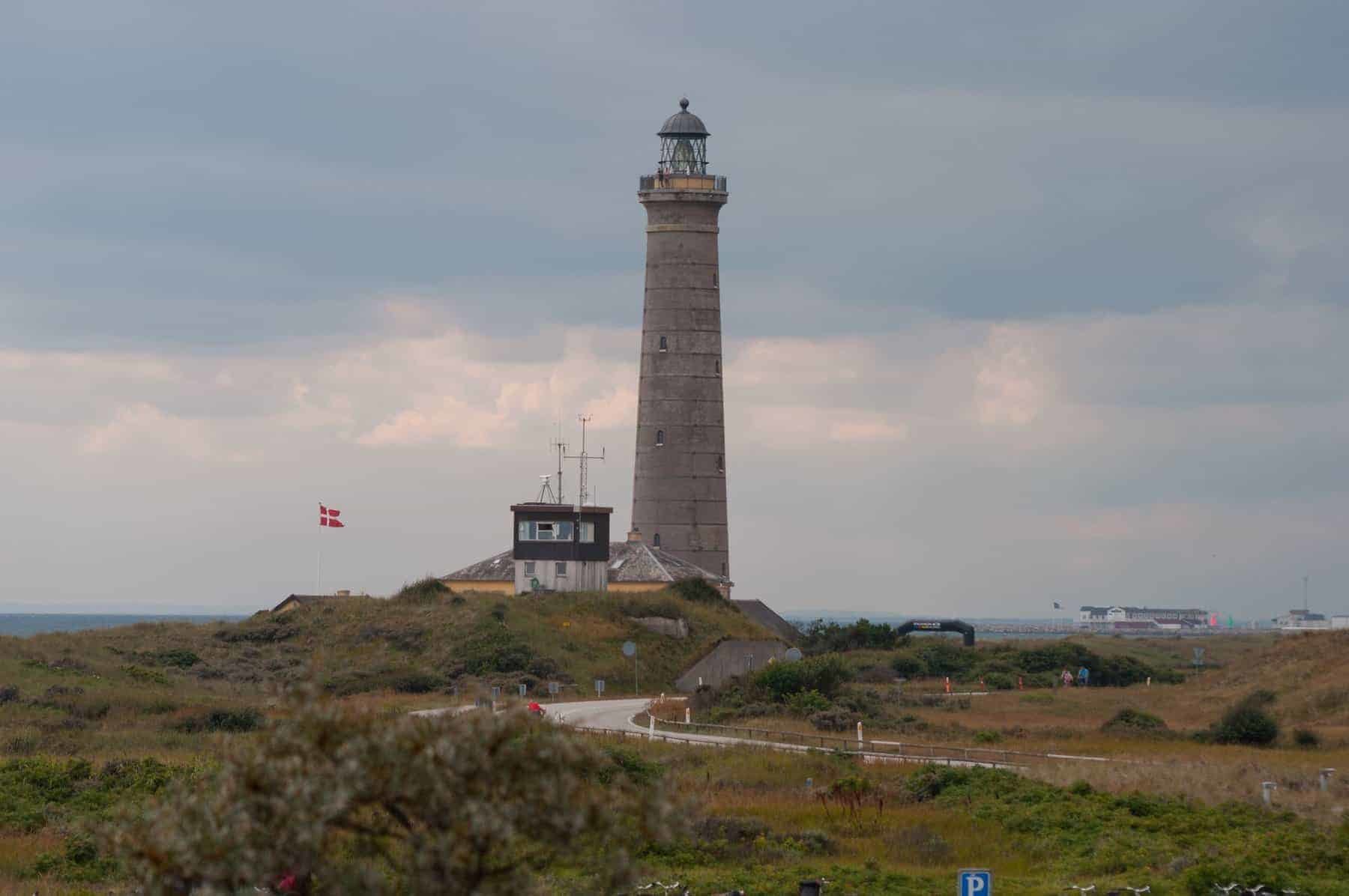 Trafalgar, the world´s most awarded travel brand Trafalgar presents themselves: "We are Trafalgar, the world's most awarded travel brand, dedicated to helping you fulfill your travel dreams and creating the best travel stories you will ever tell on the seven continents we visit. Leading the industry since 1947, each individual itinerary is designed by our team of travel experts to give you what you long for on your vacation: the freedom to discover and the confidence to explore. Through Trafalgar's exclusive immersions, such as our Be My Guest experiences, you will establish real connections with the places you visit,...
Denmark Active Vacation

Places to visit in Denmark for your dream vacation Places to visit in Denmark? This would be our selection from a very long list. Denmark, the land of Vikings, fairy tales, and Lego, is becoming an increasingly popular tourist destination on a global scale. Known for its excellent culinary scene, biking culture, and the concept of ‘hygge’, this lovely country is frequently named one of the happiest nations in the world. And did we mentioning biking? https://youtu.be/ySGUPSpCFmo Denmark is small but beautiful Bordering Germany in the south, Sweden in the east, and Norway in the north, Denmark boasts more...
Denmark Family Vacation

Northern Jutland in Denmark, where the seas meet & greet Northern Jutland in Denmark, not least of all the Eastern part, calls for your inner desire to meet a true adventure on your vacation, now Denmark opens again and welcomes you. 2 seas meet here at the very northern tip of Denmark: The North Sea in Denmark and the Kattegat. You can actually see the waves hit the shore in different directions. Often with a difference of45 degrees forming a V.  It is a wonder to behold. Denmark is a small country with a big heart. 55 minutes...
Denmark

Copenhagen is the number one place to visit The world's leading travel guide places Copenhagen as number one in the list of major cities that the travel guide recommends visiting in 2019. The appointment of Copenhagen as "Best in Travel Cities for 2019" was made by a panel of approximately 3,000 destination experts, who contribute to Lonely Planet's destination descriptions. https://youtu.be/kE5pSH3lQxU?t=9 Lonely Planet's text on Copenhagen states: "Copenhagen is Scandinavia's undisputed 'It Kid', an ever-evolving, forever-surprising epicenter of show-stopping dining, innovative design and enviably good living." The motivation emphasizes, among other things, Copenhagen's high gastronomic level at both...
Denmark SAS

Rubjerg Knude: A scenic place formed millions of years ago There are many who often use the holidays to head south. Airports and highways are crowded with people and cars that seek to escape the Danish country for a few weeks, and, return with their travel bag full of souvenirs, good memories, and photos of ageless nature from foreign skies. Many, however, forget about the road heading away from the cold north. The little beautiful Danish country is enough for natural pearls and experiences to fill the summer holiday calendar. Take Rubjerg Knot as an example, a fantastic place...
Denmark Active Vacation

Skagen in Denmark, where sun, sea, and ocean meet in perfect harmony Skagen is a historic place in Jutland (Danish mainland connected to Germany and mainland Europe) and nowadays a  place for the trendy and cool crowd, but also a place to visit for all of us, cause when summer finally hits Denmark, it is the place to be with such exuberance and an almost mythical aura. Eating lobsters drinking white wine or simply just as gratifying Danish hot dogs with a local beer on the wide, wide beach. Read more about traveling to Denmark Skagen is all about...
Cycling holidays Denmark