Albania, with a stunning Mediterranean coast

Albania opened its doors to tourism just a few years ago, and although it is probably not high on the list of preferred travel destinations for many, that´s a pity because it is a country that definitely has some interesting sights to see and things to do. Its history is both ancient and European; it has a funky capital, small, hamlets with cobblestoned streets, serene Orthodox churches, and scenery that ranges from the snow-capped Albanian Alps to the spectacular beaches of the Albanian Riviera on the Mediterranean coast, a stone´s throw away from Corfu. This rugged coastline with its turquoise waters is every bit as stunning as Italy´s Amalfi coast, minus the crowds! Even better, the prices are still affordable. It is an easy day trip by boat from Corfu, or can also be reached by bus from Thessalonica in Greece, or by international flight connections to Tirana. 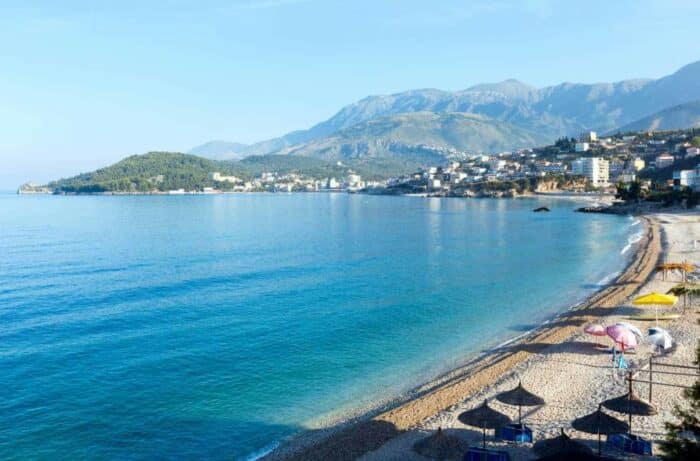 In 2011, Lonely Planet named it as the No.1 destination to visit. In 2016, 4.73 million foreign tourists did just that. Although development is still underway, a number of well-renowned international chains such as Hilton and Best Western have now established hotels here.

And traveltalk.dk has this to add, “Just take a look at the coastline along the Med. It´s right up there alongside the best you´ll find anywhere else. And check out the capital, Tirana:
Tirana with its beautiful and compact city-centre and just 800,000 inhabitants is catching up fast. Good hotels, a burgeoning cafe culture, and loads to see. (Do we now recognize a cultivated country by its ability to attract Starbucks? No Starbucks = no culture? Just a thought… :) The food is really good, too – healthy, Mediterranean cuisine. A draft beer costs just one Euro. And they seem to have grasped another popular concept of contemporary culture: Party, party, party like there was no tomorrow. Here, there is something for every taste.  We´ll get back to the historical angle later.

Albania, officially called The Republic of Albania, is quite a small country and is located in south-western Europe, encircled by Montenegro to the northwest, Kosovo to the northeast, Macedonia to the east, and Greece to the south and southeast. It coasts run along the Adriatic and Ionian Seas of the Mediterranean in the south and southwest.

Going to Albania? This year's the perfect time to visit

Albania – a new country to visit!  Albania was a very closed country for a long time. From World War II until his death in 1985, the Communist dictator Enver Hoxha ruled the country with a more than a firm hand. The dictatorship fell in 1992. Although one can still see traces of the old regime in the form of abandoned military bunkers, and monuments, the country has decisively begun its journey towards the future. It is exciting to visit a country that has been isolated for so long and now opens the window to the outside world. Excursions and historic towns and attractions…