Located more than 2,000 miles west of South America, in the middle of the Pacific Ocean, Easter Island (called Easter Island because it was discovered at Easter) is one of the most remote inhabited places on Earth. It marks the southeast corner of the Polynesian triangle, with Hawaii to the north and southwest.

The first settlers named the island “Te Pito O Te Henua” ( navel of the world). It was called Easter Island by the European admiral, Roggeveen, who arrived on Easter Sunday in 1722. It’s known locally today as Rapa Nui.

The island covers 63 square miles of land, almost half of which is in Rapa Nui National Park, and is home to approximately 900 fascinating moai statues, often called the heads of Easter Island. Giant and monolithic sculptures are scattered across the island, some proudly at the bottom of the Pacific Ocean, while others are buried neck-deep in the ground. 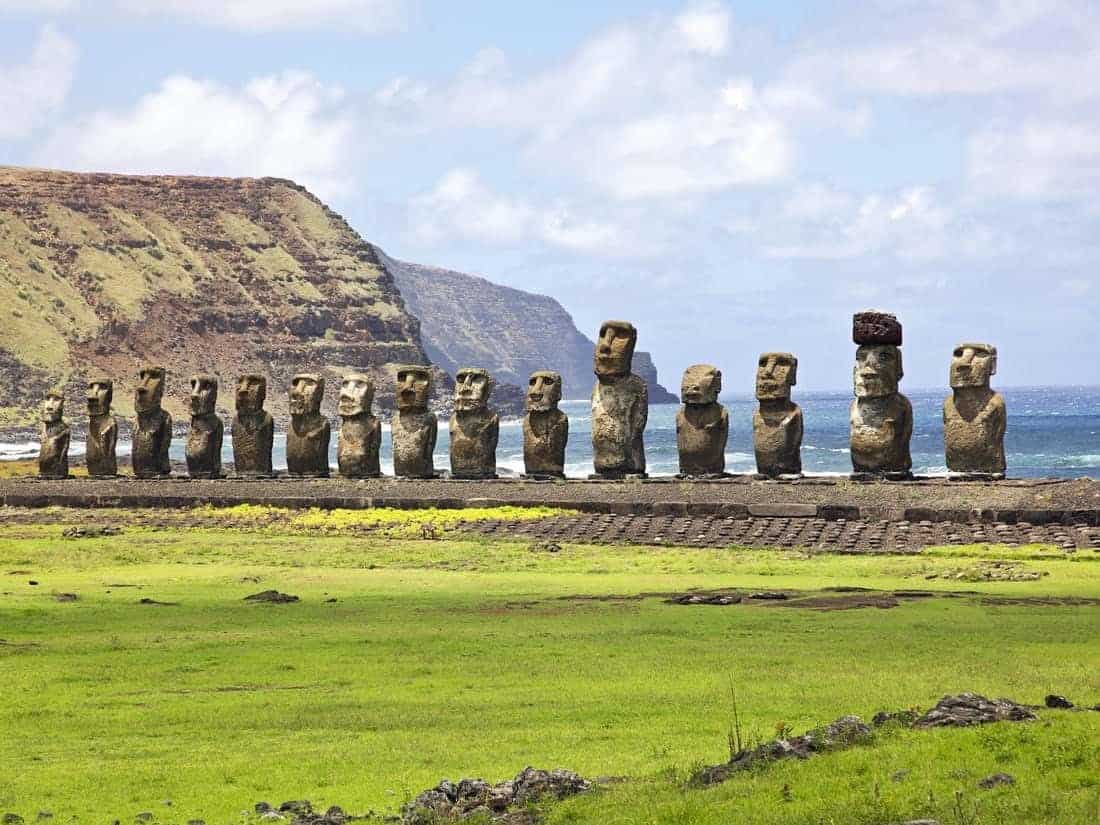 The Moai statues on the Easter Islands

The island was a paradise and the islanders thrived: Archaeological evidence shows that the island was covered with a variety of numerous trees, including the largest palm species in the world. The natives used bark and wood for cloth, rope, and canoes. Birds abounded and provided food. The climate was temperate and the water provided abundant fish and oysters.

Their religion developed with their centerpiece the giant moai, or heads, which are the most distinctive feature of the island today. The Moai, are scattered throughout the island and supposedly represent their ancestors. This was probably considered a blessing or a watchful eye on every little town. The ruins of the Rano Raraku volcanic crater, the stone quarry where hundreds of moai sculpting sit today, demonstrate how important these figures were. The birdman culture as shown in the petroglyphs was simply an islander’s obsession with their ability to fly to distant lands.

In addition to statues, petroglyphs (rock carvings), traditional woodcarvings, tapa (bark cloth), crafts, tattoos, string figures, dance, and music, the islanders possessed the Rongorongo script, the only language written in Oceania. As time went by, confidence in their faith was lost as disputes emerged. This is mirrored in the remains of the moai statues that were purposefully knocked down by human hands. This can be seen in the ruins of the Moai statues that were deliberately knocked down by human hands.

At its height, the island had more than 10,000 inhabitants, depleting the capacity of its ecosystem. As a result, lush palm forests for agriculture and massive statues were destroyed, and resources became scarce. Once prosperous advanced social society descended into a bloody civil war, and apparently cannibalism when they ran out of food sources. The islanders demolished the statues, which today have been erected by archaeological efforts.

Access to the Easter island is from Chile and Tahiti, tourism on the island is led by the Rapanui themselves. There are many tour packages and various hotels and guest houses on the island. There are opportunities to live at a private home, a perfect way to explore the island and local culture. In late January and early February, islanders celebrate Tapati, a festival honoring the island’s Polynesian cultural heritage.

There are a number of ongoing excavations, conservation and preservation projects. All but one of the 22 statues inside the Rano Raraku quarry have been previously exposed through unscientific and undocumented excavations.

Chile, from Patagonia to the valleys of Maipo. Traveltips

The island is extremely small, making it possible to move quite easily. There are rental cars, usually jeeps, and dirt bikes. With a motorcycle, you can see much of the island’s sights in a couple of hours.

One of the the biggest tourist attractions in Easter Island are, of course, the Moai. All sites are free and are located mainly along the coast of the island. Two exceptions are the Rano Kau and Rano Raraku volcanic craters. “Rano Raraku” is the place the moai carvings were created by indigenous volcanic rock workers. A visitor can see various stages of carving and partially finished statues in this 300-foot remnant of a volcano. Rano Kau, the remains of a volcanic cinder cone, has a beautiful, mysterious, mottled look. Both craters are filled with fresh rainwater. 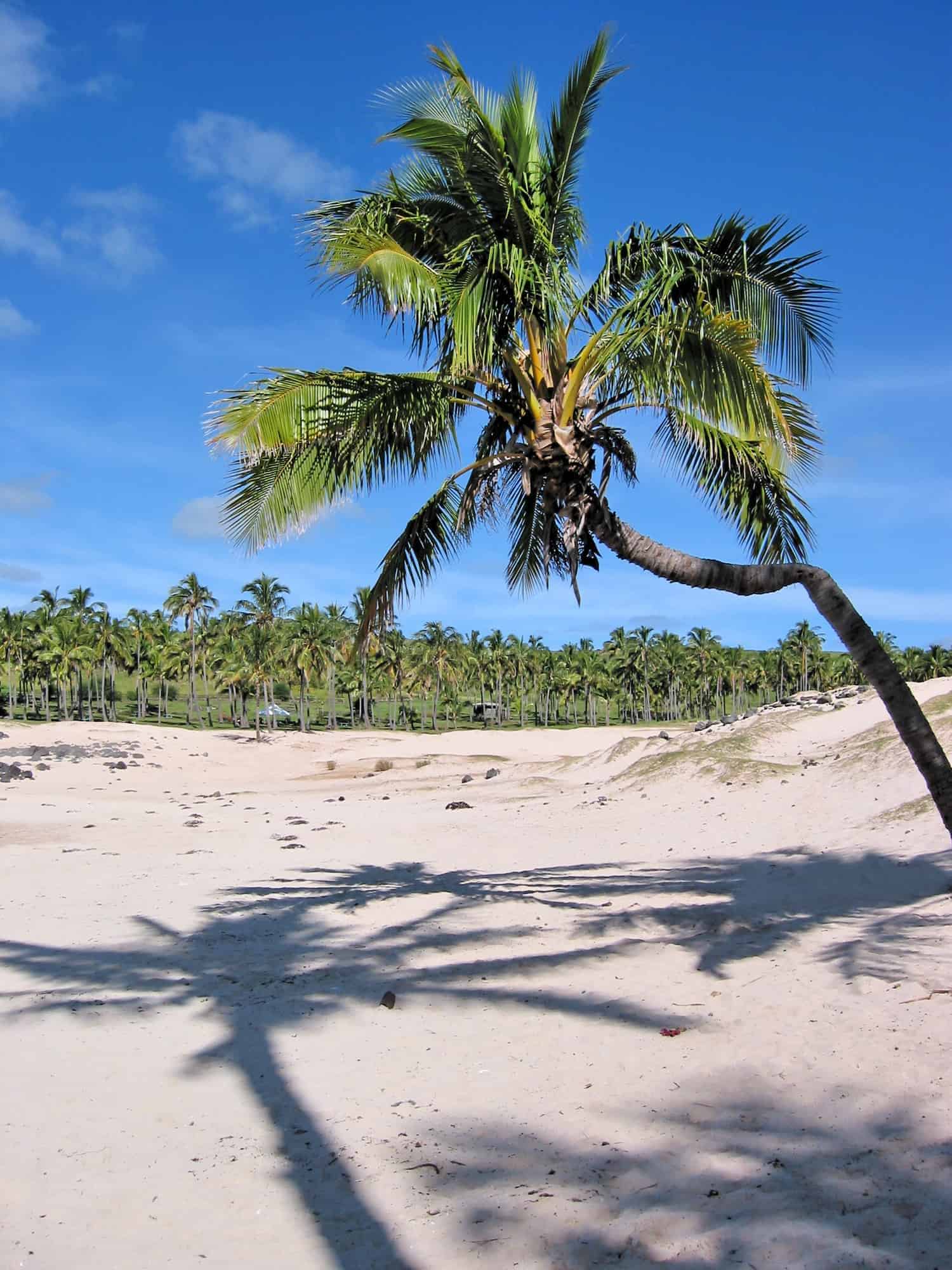 The top beach on Easter Island is Anakena

Easter Island presents two pristine white sand beaches. Anakena, located on the north side of the island, has an excellent location for bodysurfing. The second is Ovahe, along the south coast of the island near Ahu Vaihu, this beautiful beach is much larger than Anakena and is surrounded by impressive cliffs. Diving and snorkeling are popular near the Motu Nui and Motu Iti islets (well known for “The Culture of the Birdman”).

There is an extensive cave network with a few “official” caves and many unofficial caves on the island. Most of the cave openings are small but open in large, deep and extensive cave systems. These should not be explored on their own and can be wet, slippery, and dangerous.

The beautiful islands of Oceania

Bora Bora Bora Bora Island is all about true relaxation. The Polynesian lifestyle guarantees it. The Bora Bora people are never in a hurry, and the island certainly represents this laid back lifestyle. Once described as "a small emerald in a turquoise setting, surrounded by a brilliant pearl necklace",...
Oceania Polynesia

Tonga, 169 islands in the Southeast Fijo Pacific Tonga was named "The Friendly Islands" by Captain Cook, is an archipelago of 169 islands in the southeast Fiji Pacific, and generally has limestone and coral or volcanic foundations. With a history that includes settlements dating from 500 BC. C., and...
Polynesia Oceania

Blue Hawaii, blue ocean, blue sky, blue moon Blue Hawaii was the title of the super corny and very romantic movie from 1961. Elvis Presley simply loved Hawaii, just like Barack Obama and many other celebrities did and do. And no wonder! Let´s hop to Hawaii and get a...
Oceania