Downton Abbey was filmed at the impressive Highclere Castle

We are in England and visiting Downton Abbey or rather the place that made the amazing scenery for the series. The most winning TV series ever. Downton Abbey was filmed at Highclere Castle. It is a fascinating excursion destination worth a trip in itself, or drop by when you are in England anyway. Downton Abbey deals with the years between 1912-1924 in England. A period that causes major upheavals in class society and hierarchy. Ca.  100 years into the past we see a societal structure when the masters and servants are sharply separated, yet co-existing. all guided by the ulterior goal of serving the interests of the nobility in a well-defined and mandatory hierarchy.

It was the words of English Prime Minister Benjamin Israeli when he first saw the totally restored castle under Queen Victoria, a period that brought innovation and cultural growth to England to such an extent. At the beginning of the 20th century under King Edward, Highclere Castle was a natural place for the elite in England to meet from politicians to artists. During World War I, 1912, Highclere was completely like the Downton Abbey hospital for the wounded and returned soldiers. In many ways, Downton Abbey is created as the story of Highclere Castle. 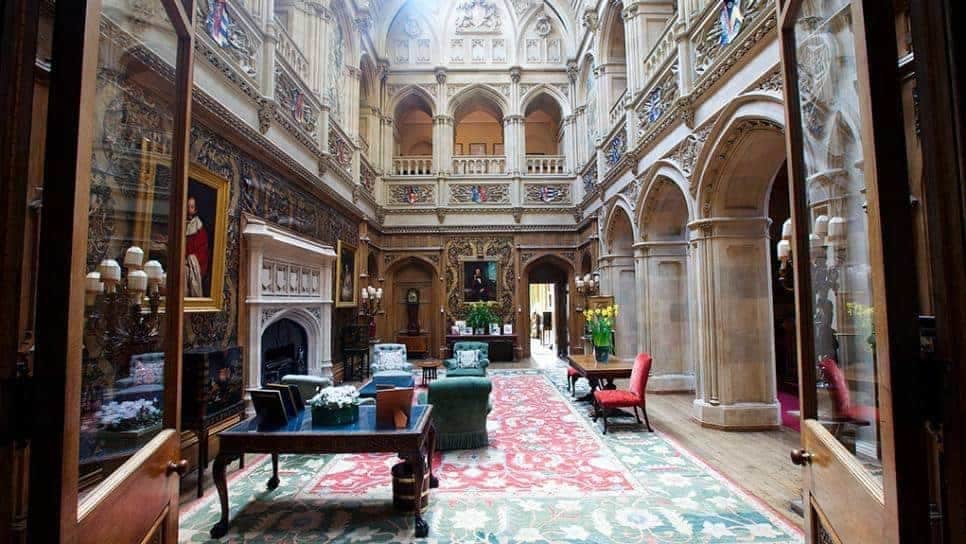 Highclere-Castle-England. you may recognize it from Downton Abbey

Highclere Castle is open for all

You can visit the castle. Like so many other castles in Europe, it is open to the public and definitely worth a visit. But the visiting times are very selective, most Easter and spring so tickets must be booked well in advance. The Earl & Countess of Carnarvon have also restored part of the castle as “hotel”, but again it is quite limited with space and extremely popular, so check the link Highclerecastle shop  for information. 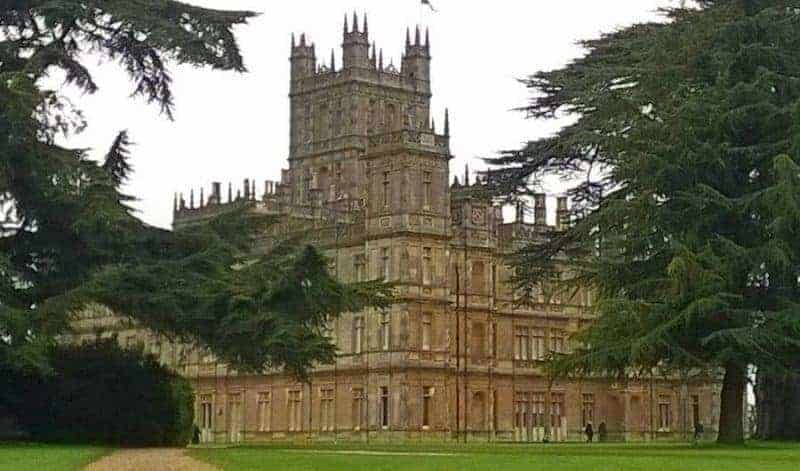 Highclere Castle, where Downton Abbey was shot,  is a country house in the Jacobean style, with a park designed by Capability Brown. The 5,000-acre estate is in Hampshire, England, United Kingdom, about 5 miles south of Newbury, Berkshire. It is the country seat of the Earl of Carnarvon, a branch of the Anglo-Welsh Herbert family. The architecture is reminiscent of the Houses of Parliament in London. Popular TV show Downton Abbey was largely filmed here and the tour of the castle rooms takes you into many rooms used in the series.

How they shot Downton, see the video

The video is a nice and personal video about Downton Abbey’s creation. The series ran for 6 years and there were rumors of an upcoming movie. Take a cup of tea while you see it 🙂

Where is the Downton Abbey village?

In the famous series, there are numerous trips to the village nearby. It is actually a charming village, where the Granthams lived and it is named, Bampton, in Oxfordshire, where the fictional village of Downton was set and filmed.  Most of the exterior shots of this television drama series were filmed at the Oxfordshire village of Bampton. The series is set in 1912 and stars actress Dame Maggie Smith and actor Hugh Bonneville and is about the aristocratic Crawley Family. The shows creator is Julian Fellowes.

Finally, there is a sequence, a movie having its premiere on September 2019. This is how the trailer looked. A must-see ?

Castles in England, where the adventure begins. The castles of the British Isles have always fascinated travelers from when they were constructed to modern times. The English castles evoke images of royalty, kings, queens, princes, princesses and even ghosts. Unrivaled legend and intrigue, about 5,000 castles have been built...
Adventure Travel Romania

Famous castles in Scotland including some really fairytale ones. Castles in Scotland from Edinburgh to the wild highlands. You will feel the wings of history and taste the history and perhaps even the whiskey - of an amazing proud and hospitable nation. Scotland has the captivating power of...
Italy Castle Holidays

Castles in Italy from Rome to the island of Ischia, you can visit today The history of Italy goes way back and is therefore very rich in archaeological sites and Etruscan, Roman and Romanesque buildings, as well as many other eras. Thanks to intelligent renovation and dedicated reconstruction, some...
Germany Castle Holidays

10 magnificent castles in Germany curated for your pleasure Castles in Germany is  huge part of what to see and visitand perhaps even use as your hotel for the trip  in Germany. You will probably be rather surprised to know that in Germany there are no less than 20,000...
Travel Food and Wine