We flash back in the movie history to justify, why we bought delicious drinks in Chicago. Certian things in life need a justification.
In 1986, the movie Ferris Bueller’s Day Off, the charming and well-liked teenager Ferris Bueller takes a day off from high school, so he can enjoy a summer day in downtown Chicago. He has convinced his parents and fellow students that he is deadly ill, but his principal does not buy the story and does everything possible to capture young Bueller and expose him as the troublemaker he really is. During the film you get a guided tour through Chicago. Seen with a teenager’s hopeful and effortless eyes, you step up into the city’s tallest building, Sears Tower (today: Willis Tower), get a visit to the Art Institute of Chicago, entrance to a baseball game at Wrigley Field and a dinner on one of the city’s many fine restaurants. Even after visiting the city several times, it can still be difficult to reach as much in a single day as Ferris manages. Chicago is America’s 3rd largest city, and there are many temptations in the form of shopping places, cafes, beautiful views, that can make one forget the schedule. The day can both start and end on Milwaukee Ave, where brunch places as well as bars are everywhere to find. In recent years, Logan Square has emerged as the new hip neighborhood outside the city, and this is the area through which diagonal Milwaukee Ave passes. The street runs from the northern suburbs to the center and is kept alive by countless bars and eateries day and night. Café Mustache has covered the walls with pictures of men with various kinds of mustache, and the coffee is served in cups sponsored by small local companies. If you want to visit Milwaukee Ave later in the day for an evening cocktail, it is possible to take a walk past Estereo, which specializes in rum and Latin American cocktails. You will find the place on a street corner where both sides of the site are opened when the weather is right. The bartenders and the vast array of rooms are located in the middle of the spot in the best beach bar style and with the humid summers in Chicago, one can quickly catch a few tropical vibes when enjoying a Pisco Sour accompanied by the sound of Cuban music. 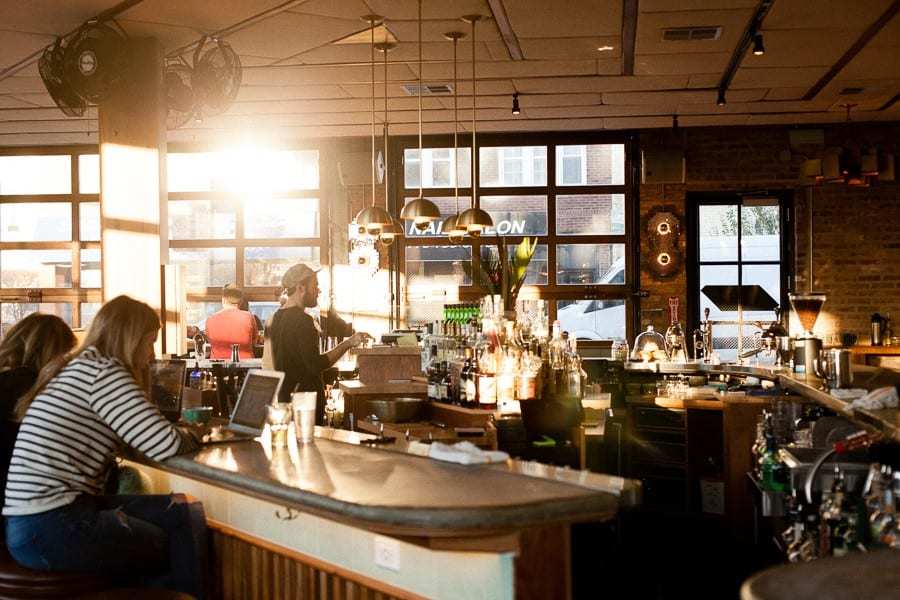 At Lost Lake they make dolphins out of bananas

If you want to go all the way to the Tiki genre, you can find Lost Lake on Diversey Ave, which cuts Milwaukee Ave around the center of Logan Aquare. Every serving is creatively created and decorated, and it is even possible to see a bartender make a dolphin out of a banana and a few leaves – well worth a visit if you are into exotic cocktails and hula mood. 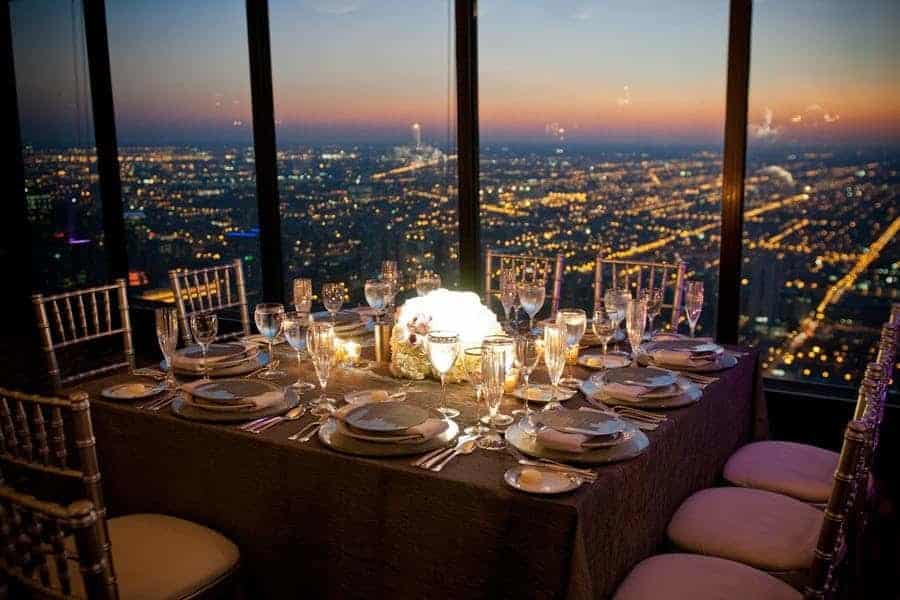 Although there are many places to eat in Chicago – in the suburbs as well as downtown – there is no place to beat Signature Room on 95th when it comes to views. Located on the 95th floor of the John Hancock Tower on the north of Michigan Avenue, diners enjoy food and drink for city views as well as over Lake Michigan. If you book a table in the restaurant you have the opportunity to experience a 360 degree view over the city. However, it is highly recommended to get a south-facing table so you can look down at Millenium Park and Lake Michigan. Last but not least, by looking out the window from the 95th floor, one can get an answer to one of the town’s oldest questions – what is actually happening on the roofs of skyscrapers? But be aware here that there may be queues for both getting up and down from the 95th – so spend half an hour at both ends of the planning of the visit to the Hancock Tower, so the focus may be on enjoying the amazing view and atmosphere in the highest placed skybar in town. If you have finished eating in John Hancock, there are several ways to finish the evening. Choose your bar or choose a few. 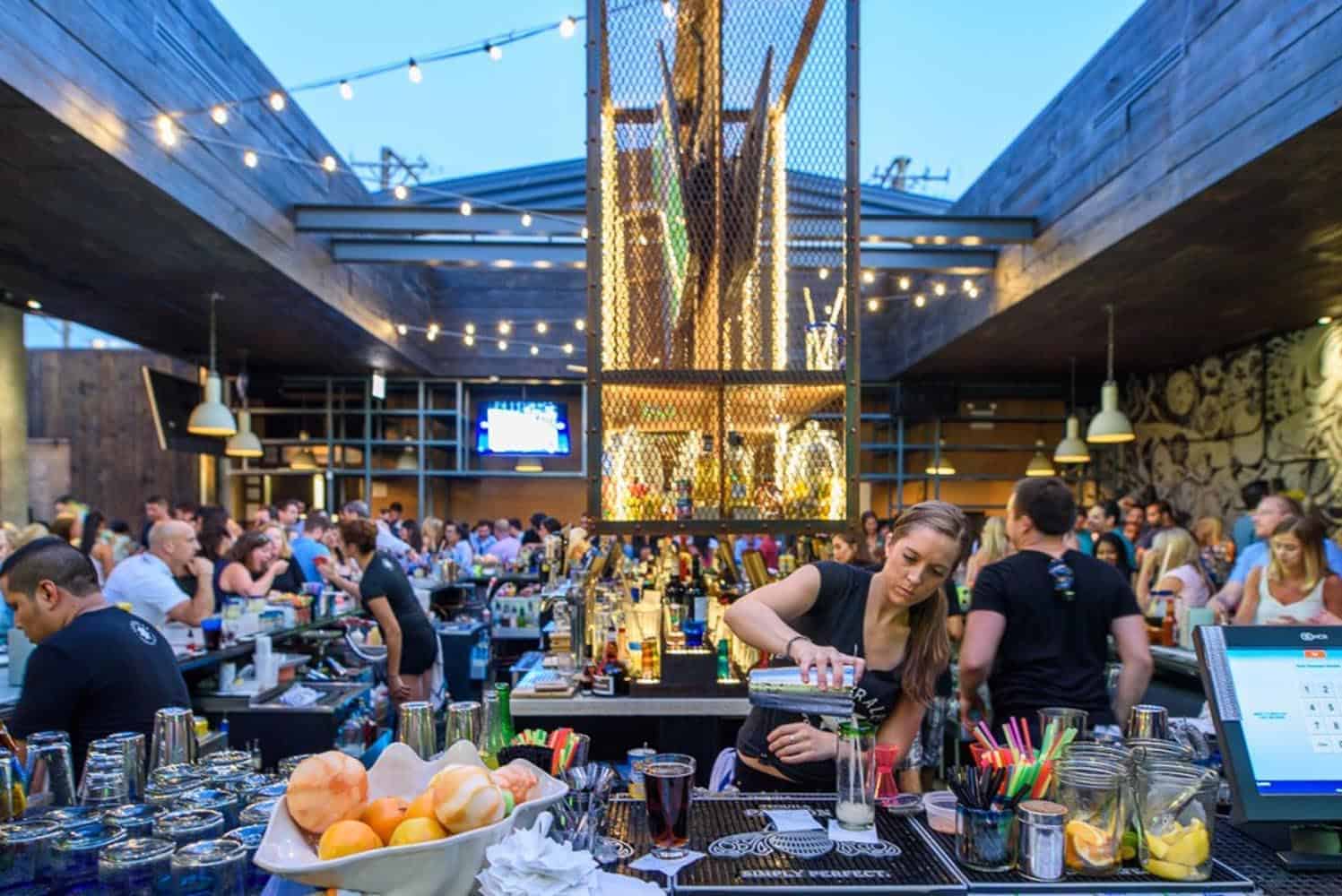 Federales for a different party

If you are looking for fish tacos, parties and frat parties, you can visit Federales, which is just outside the center. The site opened in 2016 and with its large patio has become a haven for many of the city’s inhabitants first in the 20s. The place smells far away from a college party, but the prices and the friendly service make it a feast you want to participate in. The icing on it must be said to be the somewhat crazy concept that the place has run with right from the start; Tequila shots are served and drunk from glass made from ice, which after drinking his shot is thrown against a large bell hanging outside. In the best college style you can witness the alpha dancers occupying position some meters from the bell, sliding the tequila through the system and with a baseball-inspired throwing technique send the glass towards the bell, after which the sound of the bell’s bell and ice splinters give rise to both men and women involved in the ceremony.

Ferris Bueller is on the run when visiting Chicago, and once in a while you also feel like you are fleeing time trying to put an end to the exploration of all the qualities that downtown and surrounding neighborhoods have to offer on. From Milwaukee Ave and Logan Square to the 95th Signature Room downtown, Chicago is a city that offers more exciting experiences than a single comedy movie has room for.

Places to visit for sure  in the US

British Food, from then to now British food culture? Frankly, years ago, it was not something to brag about seen from overseas. Now British food has reached an impressive level of creativity, local identity, and reinvention of old ways to do things…
FinlandFood and Wine

Napue: A Gin worth a journey to Finland? Is Napue Gin the world’s best gin? Finland is actually really good at anything with distilleries, which leads to tasty alcoholic beverages. Finland is famous for excellent Vodka. But did you know they have…
Food and WineTurkey

Turkish Food: Delicious, healthy and extremely tempting Turkish food is arguably among the top 4-5 cuisines in the world joining French, Italian and Chinese on a short list. There are countless Turkish specialties, as well as traditional European everyday dishes. Some of the…
Costa RicaFood and Wine

What do you eat in Costa Rica? Black beans and rice in a Casado! Costa Rican cuisine is really healthy, delicious and varied. The country is more than dazzling white beaches and deep jungles. It is also a proud culture and food tradition…
Food and WineSingapore

Singapore bars serves more than Gin Slings Singapore bars are the best in the “crazy good bars” category in Southeast Asia right now. We don’t have to invent the category to put them there. The bars in Singapore are so inventive, the…
Food and WineSingapore

Hotpot robot restaurants in China have arrived to take over. Haidilao, a quality chain of Chinese restaurants, known for fresh ingredients, high quality, and service,  has furnished one of their restaurants in Beijing with an automated cold room with robotic arms and…
Food and WineMoldova

Wine discovery in Moldova A wine trip to Moldova may not be at the top of your list of upcoming holiday plans? But read on, it might be the best wine tour tip of the year. In Europe’s cheapest and unfortunately also…
Food and WineSingapore

Singapore restaurants. More than 6000 to pick from!