What do you eat in Costa Rica?

Black beans and rice in a Casado from Costa Rica! The ultimate health food?
Costa Rican cuisine is really healthy, delicious, and varied.

Costa Rica is more than dazzling white beaches and deep jungles. It is also a proud culture and food tradition that is delicious, healthy, and “easy on the eyes”. In short, it is worth putting into the subject, but a little warning you will probably be hungry! Costa Rica’s gastronomic tradition borrows from the original tribes of Central America, the Spanish influence, and from African cuisine.

It is food for all senses. These are the freshest ingredients and everything from the sea and often black beans, which are signature ingredients. It should be added that there are significant regional differences, so it is worth traveling a bit, for that reason alone, if you want to learn about food in Central America.

Let’s take lunch as an example: Most Ticos (the term for the natives of Costa Rica) eat “Casado” for lunch. It is a fairly simple composition consisting of rice, beans, and meat. “Meat” can be from fish, chicken, or beef/lamb, etc. It is a free composition. Add to this a green salad or pasta. Casado comes in several variants as said, but can also be a “side order” or with french fries, avocado, in combination with tortillas with cheese, eggs or corn. Another lunch right could be “picadillo” which is a stew with potatoes, onions, peppers and lots of mild spices. Costa Rica food is generally mild. 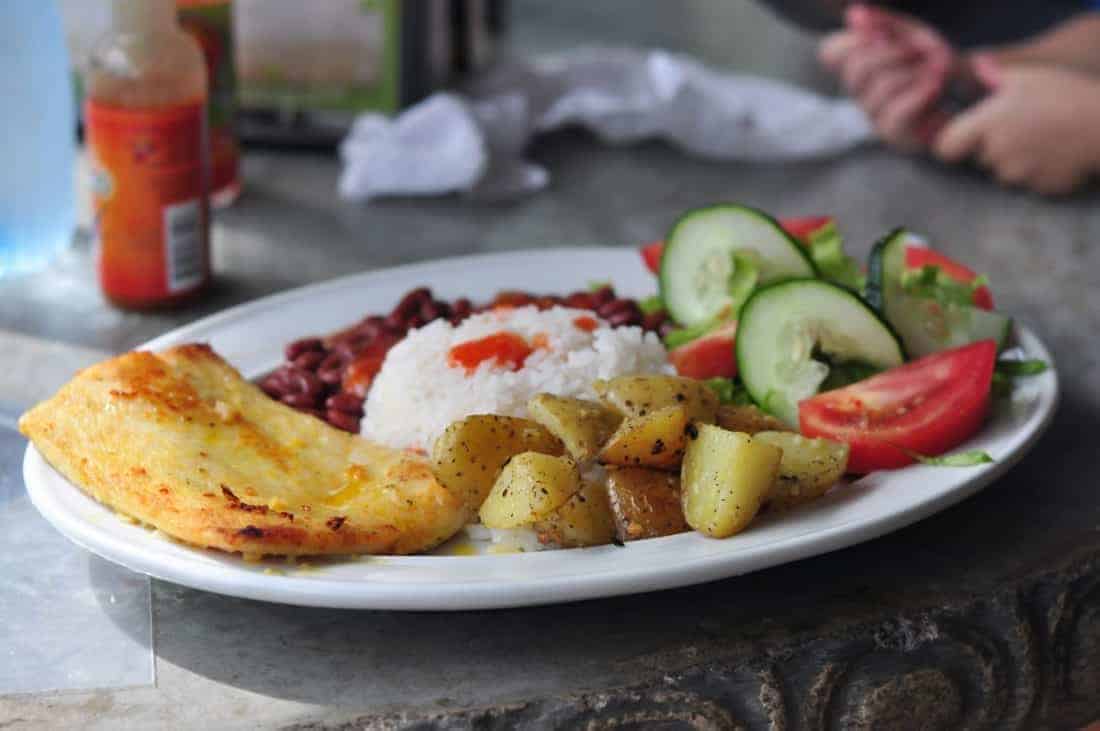 And what does Casado mean?

It may be a little fun to know that it means “a married man” or “a hunted man”, that is, a coveted man. It is a cheap dish, which is characteristic of Costa Rica’s kitchen, partly because it can be made from the ingredients you have at your fingertips. That’s the whole basic theme. It has its own interpretation in Costa Rica but is found in Central American cuisine more places and further south as well. It is a nutritious balanced dish with proteins, not processed carbohydrates and not too fat.

A recipe for Casado

Casado with black beans rice and pork: There are many variations, but there are almost always beans and rice, and small white rice grains are used. See this recipe that contains pork chops, rice, beans, garlic, tomato, carrots, black beans and cheese, and small tortillas can be added to it. A dish with very little fat and balance between protein, carbohydrates, and fat.

Paris is the city of cities Paris, France's famous capital is located in the world's leading tourist country and is known worldwide as the "city of cities". It's not bad branding and it promises a lot that Paris can deliver most of. You can find more impressive cities with...
Food and Wine Italy

Italian Food, developed to perfection over more than 1.000 years Italian cuisine (cucina) is much more than a form of food; it is a way of life in a country where family, friendship and celebrations are indelible. Italian cuisine is simple, vibrant, and good for you. Italy is one...
Italy Food and Wine

Friuli, a mountain of hospitality

Friuli, from Venice to the highest mountains in the northeast Friuli is favored with a perfect climate for viticulture. And that started our interest in Friuli, one of Italy's 20 regions (see map). It was the incredibly elegant white wines, we were served. So we wanted to know more:...
City ​​Breaks Food and Wine

What to see in the Vatican in Rome. The Vatican is the mini-state in the center of Rome, One of the smallest states in the world in the middle of the capital of another country. It is rather unique. It is full of incredible art, architecture, and history. If...
Food and Wine China

Chinese food culture Chinese food from Beijing to Shanghai Chinese food is, as always seen with our eyes, a huge, complicated, and different concept, but almost always delicious. China is also when we talk food, and we do, a refined and deeply diversified cuisine due to the country's long...
Food and Wine Thailand

Thai Food: Top 20 must-eat dishes in Thailand. Thai Food is what you want if you're looking for a globally renowned cuisine with a spicy kick. Thai food is up there with the very best. Thai cuisine is really popular all over the world because it's...