Compelling reasons to go to Brussels in Belgium on vacation

Let´s dig right in, we are in Brussels, the unofficial capital of the European Union, where  Savoir Vivre is in sharp contention with Paris. Officially Brussels is the capital of a number of Belgium municipalities, and unofficially more or less of the EU.

Belgium, as  seen from a Bruxelles perspective

Brussels in Belgium symbolizes for many visitors mostly EU, as the EU’s “capital”, and as the bureaucrats’  center of power. You may be critical of this fact or not. That is politics.  But the city is much more. Here are a few good reasons to take a perhaps short trip to Brussels. Excuses to go, if you need them,  range from “I must try the exquisite beer in Belgium” to  “I want to see this famous Manneken Pis Statue” kind of like seeing the little mermaid in Copenhagen, Denmark.  No big thrill, but it is a tourist “must see”, and even if you do not identify yourself as a tourist, you may well still go see it.  But is Brussels as a travel destination underestimated? Probably. No, actually, for sure. Let’s provide a little inspiration.
There should be no visit to Brussels in Belgium without a visit to the Grand-Place. It is the most famous place in the Belgian capital. It is also one of Belgium’s biggest tourist attractions and is considered one of the world’s most beautiful urban spaces. The beautiful and homogeneous space is surrounded by private and public buildings, which dates back to the late 17th century, after a French bombardment in August 1695 had destroyed the original area. The French King Louis XIV was somewhat lacking in respect for the place, and he destroyed effectively most of the buildings. His guns were aimed at the town hall, which ironically was the only thing, that was not hit. The square was rebuilt and serves today as a symbol of invincibility. 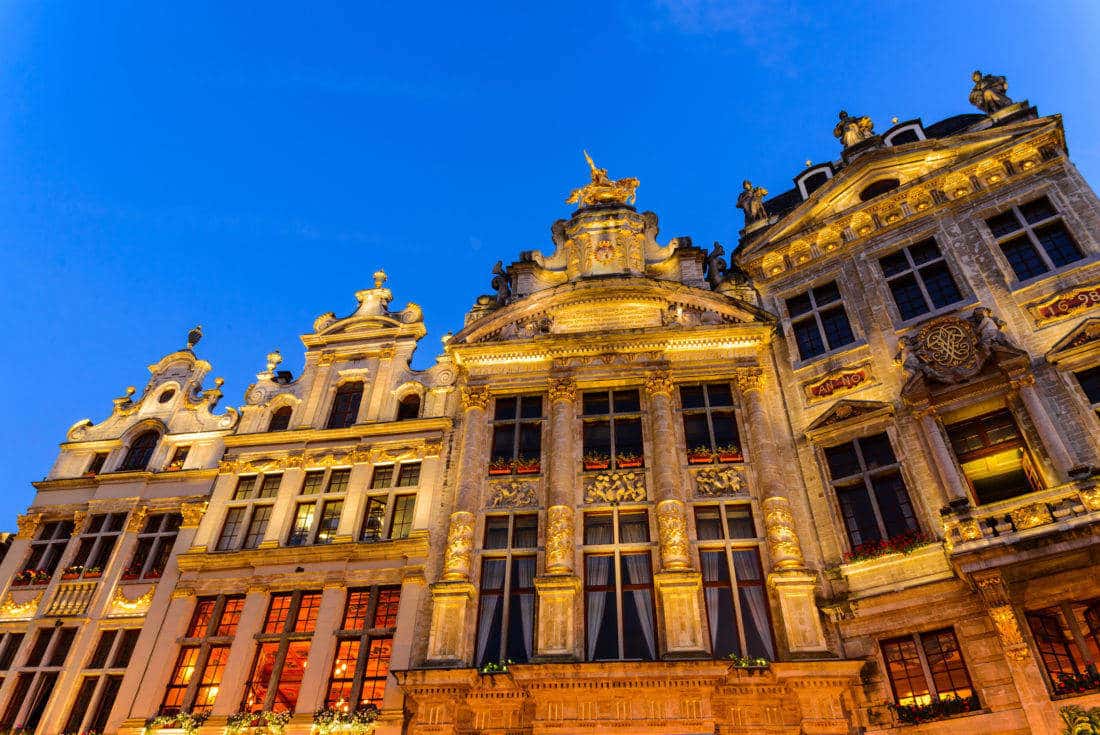 The flower carpet in the center of Brussels

The houses were rebuilt in five years with money from the city’s rich bourgeoisie. The result is a unique blend of Renaissance and Baroque architecture and of southern and northern European building tradition. The architecture reflects the rich social and cultural life of the period in this important political and cultural center. 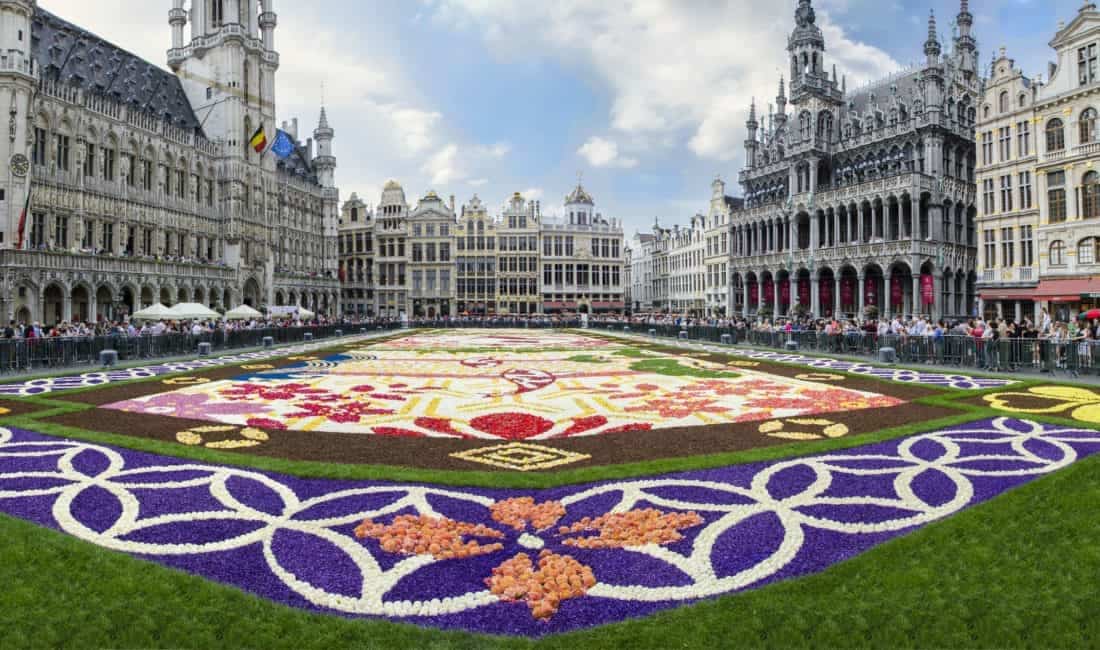 Every second year, large parts of the square are covered by 1 million begonias, which are placed in a flower theme. Here from 2016. A reason in itself to see the city in the summer. 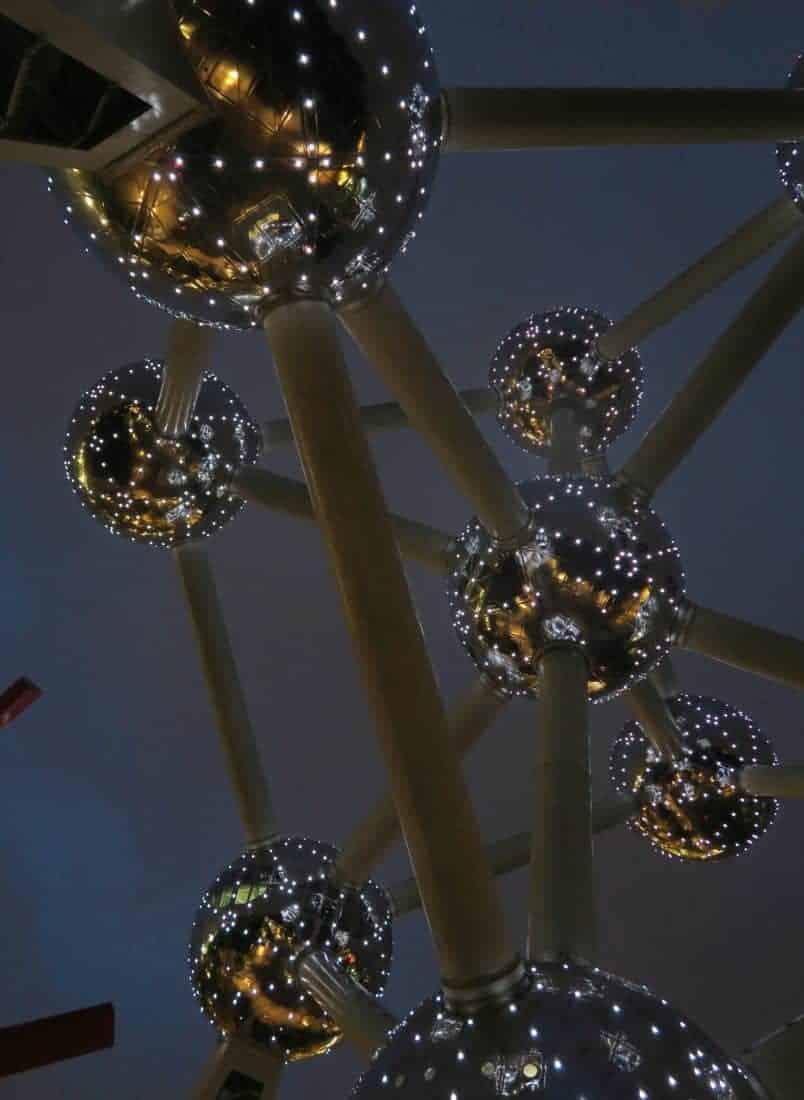 Atomium Bruxelles, a most unique museum

Atomium, an iron crystal as a museum ?

This stunning building was built in 1958 for the world exhibition that year. It is no less than 102 meters tall and a faithful copy of an iron crystal multiplied by 165 billion in size. Every ball in the Atomium structure has its own function, as exhibitions or at the top a restaurant (95 m) with incredible views and guaranteed Belgian delicious food, it is promised. There is also a beautiful park to enjoy.
Order tickets here for the Atomium.

What to eat and drink in Brussels?

Finally, we came to the main thing: Food and drink. There are a few things we just need to have to get right when it comes to local preferences. Beer, french fries and waffles, maybe even in that order. Yes, it is true. The monks in Belgium laid the foundation for one of the world’s most important beer productions. We all know the brand Leffe, but there are hundreds of others. It will take a life and a living of steel to get through them all. And nobody does “Belgium fries better”, and the waffles; they are to die for. 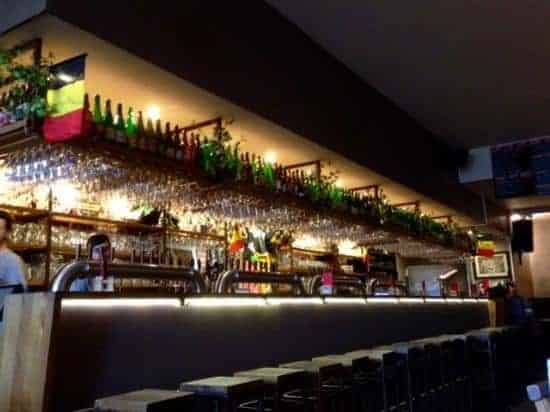 One of the most famous cafes/beer bars with a sharp beer focus is the Mother Lambic at Place Fontainas (there are actually two addresses), where from 11:00 you can choose from 100 different Belgian and international beers. Many from the tap. Visit Moeder here. Or visit the famous Delirium Café with the famous pink elephant beer; as well as an insane strong beer. It is a bar 100m from the Grand Place in Brussels (the French name), which as the only one in Europe can offer more than 3,000 types of beer. Each beer type is featured in a beer Bible that guests and servants can look up in. They have just beaten the world record. In 2018, there are 3162 different beers. Take a taxi, me? 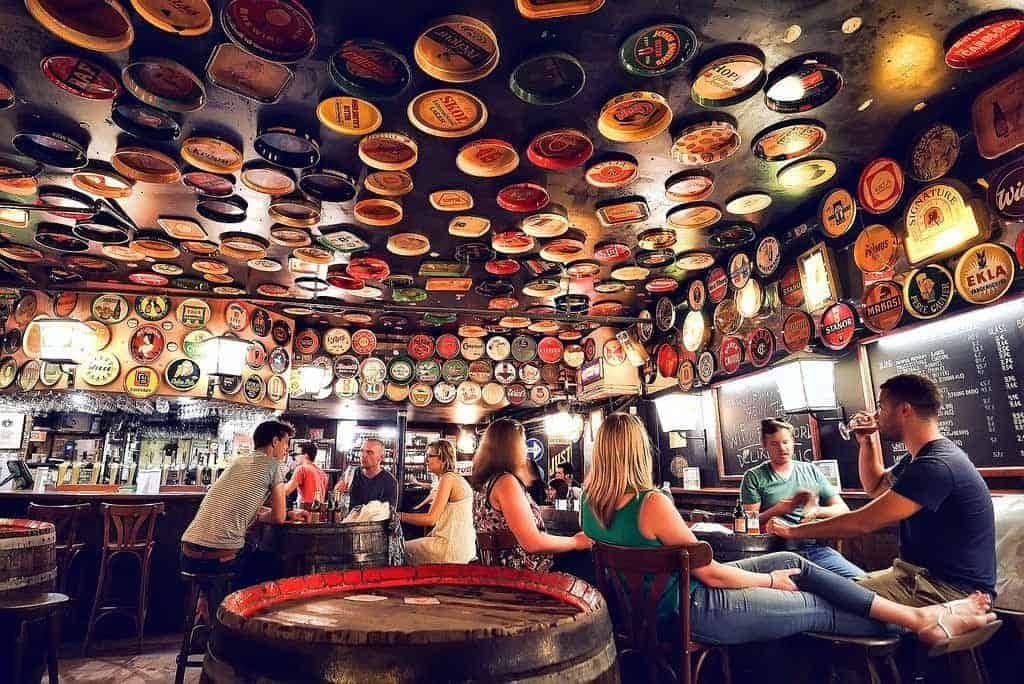 Eating out in Brussels

The food is very French inspired and at a high culinary quality level, so if you are a gourmet, and that is what you are looking for, Brussels is the place for you. Many food journalists and bloggers even say you eat better French food in Brussels than in Paris. Let’s put that statement to the test. Naturellement. 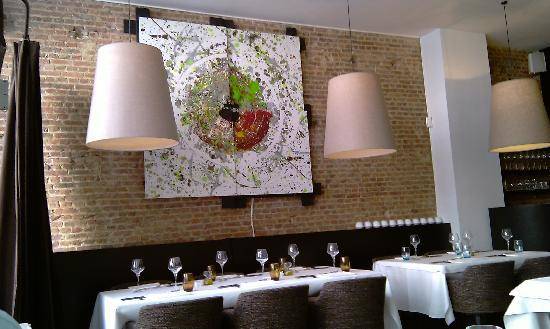 Let’s visit and sample the Michelin star restaurant Alexandre, where you can eat delicious per person from approx.  80- 100 USD. It is the price for the small evening menu. Generally, eating out in Brussels is much than in many other European cities, and the quality is high. Bon appetit.

Make a table reservation at Alexandre here and see the dishes. More about Brussels very soon. More travel inspiration from BelgiumLinket to the section on Belgium on traveltalk. Much more about Brussels / Brussels on the way. Among other things. about the Belgian waffles, now we have promised it 🙂 Until then you have to settle for Løgismose’s recipe for Belgian waffles. They are quite overwhelming and really addictive.

The link to the intro to  Belgium.

The Belgium waffles are truly overwhelming. Thought we would end this little intro with a picture of giant waffles from Belgium. 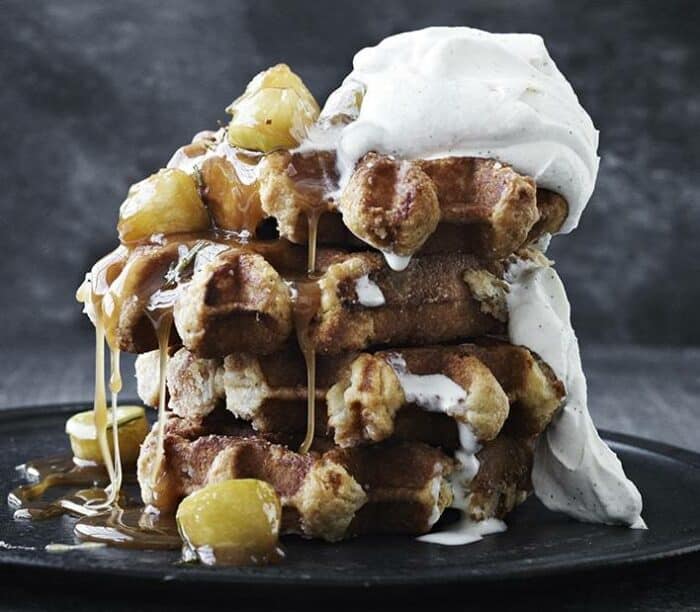 And the official Visit Bruxelles homepage.

Amsterdam is pretty close to Brussels and an innovative and super friendly place to visit with much to see around the canals, tulips and Heineken included.

What You Must See Visiting Belgium

What You Must See Visiting Belgium Belgium is a great country that sits between France, Germany, Luxembourg and The Netherlands. There are many great opportunities to explore the rich culture of Belgium, no matter what your interests. If you're wondering what you should do while visiting Belgium this article...
City ​​Breaks Norway

Bygdoy near Oslo, a beautiful peninsula Bygdoy is technically only a peninsula. Oslo actually has a pretty good idea of how to enjoy comfortable island life.  Still, there is a special vibrant atmosphere on the "island" south of Oslo, which delivers a really good travel experience. There are about...
City ​​Breaks Airlines

Visit Porto in Portugal on the coast of the Atlantic Ocean Travel to Porto is to visit Portugal's second city, Porto and authentic Portugal. It is a fantastic way to experience the country's culture and history. Also the enormous momentum since EU membership, but also an important sense of...
Art and Culture Germany

The Reichstag in Berlin: A Short Guide The Reichstag is the German Parliament building in Berlin, completed in 1894. Sitting on a hill overlooking the city, it’s the home of one of the most famous statues in Germany: The Victory Column. Although it burned down during World War II...
Italy City ​​Breaks

The most famous fountain in the world?