Art in Oslo: Where the Sculptures have left the building

Art in Oslo in Ekebergparken and Frognerparken are two outstanding examples of Oslo being able to carry out major art projects and in general, manage to deliver significant art experiences in the open air, and thus it is very Norwegian. Nature is completely close to the Norwegians. It is not a careful and decorative art. It’s art that moves you and me. 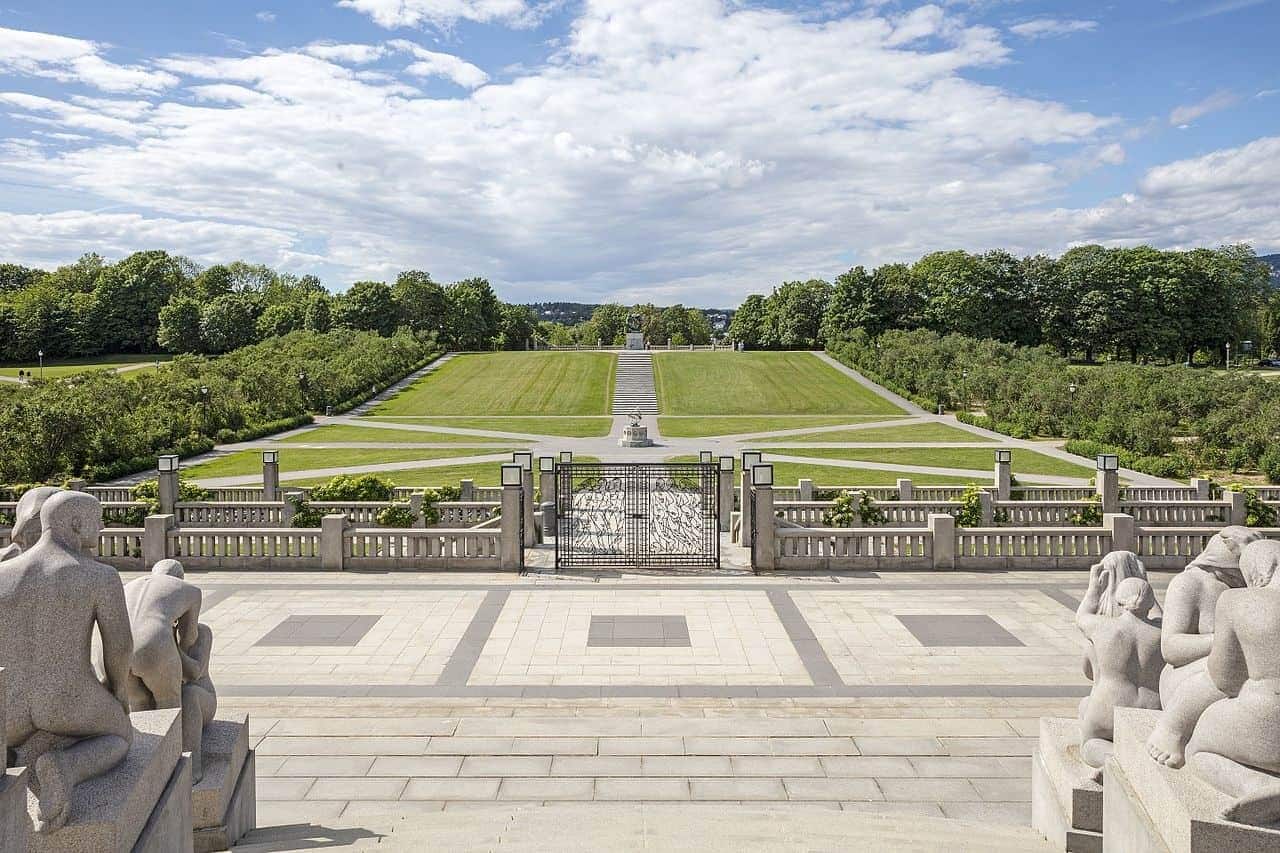 Oslo has, in fact, taken a persistent stand against the idea that art is at its best in the architect-designed and well-lit museum corridors. Instead of forcing the family outing indoors to get the cultural fix, the Norwegians have understood that sculptures and other material for reflection for those interested in art thrive in the great outdoors, in nature.

Art experience in Oslo, the first stop is Frognerparken

Frognerparken is both picturesque and idyllic but has a touch of something else, more ” creatively twisted” than just a city park with sculptures and statues a lot. Among magnificent fountains and well-kept green lawns, the majority of the sculptures’ activities seem anything but idyllic; a naked baby on the edge of one of the park’s bridges, a male figure with children grotesquely hovering around hands and feet, and the iconic monolith of squeezed people protruding several feet into the air in the middle of the park complicate the experience. What the park’s main sculptor Gustav Vigeland in his time has tried to say through his works remains an open question, but one is left with a feeling that he did not see human existence as an uninterrupted dance on roses. 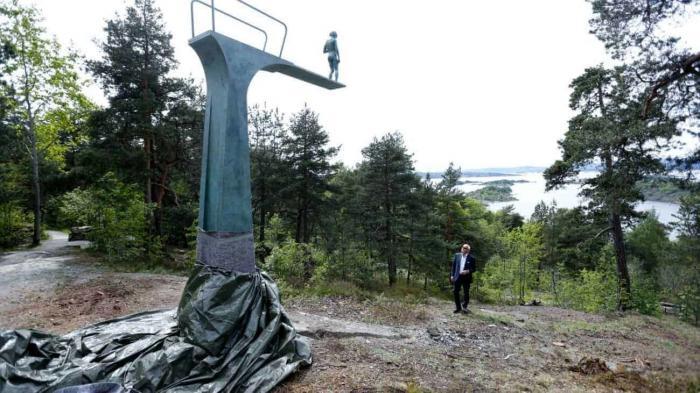 Outdoor art in Oslo can also be cultivated on a walk through Ekebergparken in the southeastern part of Oslo. Despite the fact that the experience now takes place in hilly terrain with an incomparable view of the Oslo Fjord and the city’s Opera House, we are still surrounded by art and sculptures with something on our minds. Where Frognerparken balances on the edge of gloomy undertones, the macabre and ominous has been allowed to flourish more freely around Ekebergparken’s forest paths. 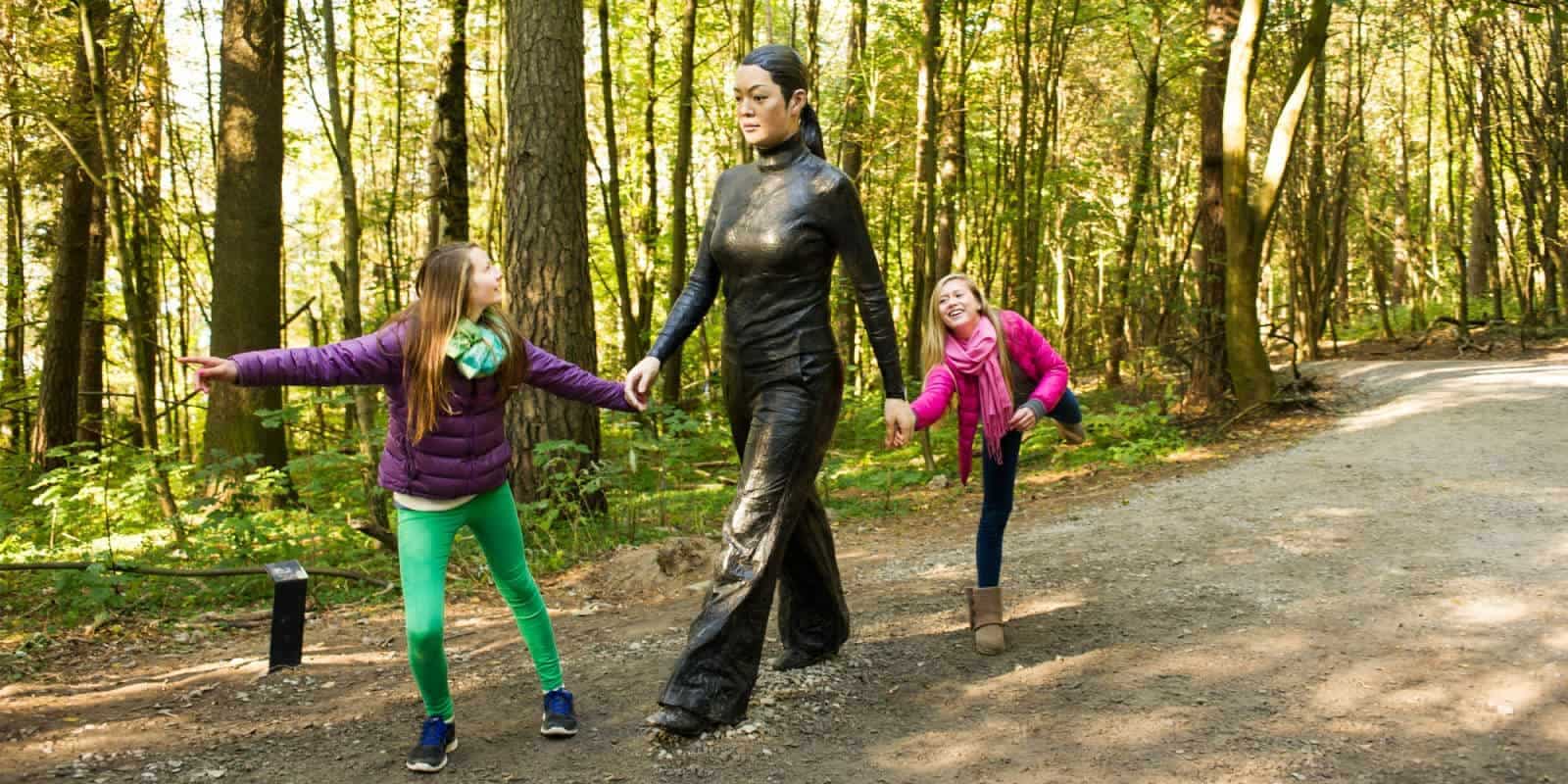 An angel has a body where half is open, so we can see its inner anatomy, something resembling burnt skeletons carved into a small tree,  very subtle, but what it is, as well as a slightly overgrown lady with Asian facial features standing in the middle of the walkway. Ekebergparken however,  is by no means a pure horror park – on the contrary, bring the children, they will love it.  The surroundings are majestic and the view of Oslo from the park’s restaurant is not much better anywhere so close to the city. All in all, the otherwise notoriously frivolous Norwegians have reinvented themselves through art in the open air with something on their minds.

Easy access to both exciting cultural offerings from central Oslo.

Both are easily accessible as a tourist and can be highly recommended as part of the program on a Sunday trip through the city. Our Norwegian brothers are not happy about booze or the like in open places like parks, so hide the disposable grill and beers away and instead float through Oslo’s outdoor attractions with a clear mind. Whether the mind is just as clear after standing face to face with the monolith in Frognerparken or the Asian lady in Ekebergparken is far from guaranteed. Art is there to move something, in all of us with a heart and a brain.

Vesterlandet, experience the nature of Norway

Intro to travel in Norway

On a cruise to beautiful Norway

Visit Madrid, the wonderful Capital of Spain Madrid is a magical city. It's the perfect place to visit if you want to experience Spanish culture at its finest. The city is full of energy and there's always something to do. Madrid is also home to some of the best...
City ​​Breaks Food and Wine

What to see in the Vatican in Rome. The Vatican is the mini-state in the center of Rome, One of the smallest states in the world in the middle of the capital of another country. It is rather unique. It is full of incredible art, architecture, and history. If...
Turkey Art and Culture

Cappadocia, a nature´s wonder in Turkey and protected by UNESCO During my every visit there, I get many different kinds of inspiration, that remind me of fairy tale stories from my childhood. Would you like to enlarge your imagination world too?! If so, take the destination to “Cappadocia”. The...
Poland Golf Breaks

Visit Poland, See the new Warszawa, Krakow, and Tatra mountains Visit Poland, cause it is now a vibrant new edition of itself. It has been an exciting travel destination since before the fall of the Iron Curtain. Now it is a country with recent history as a country with...
Italy Food and Wine

The beauty of Venice The beauty of Venice is world famous. The number of tourists during summer too many, but a witness to the importance of Venice. No city in the world is quite like Venice. With its winding canals and picturesque architecture, it's a truly unique place. And...
Art and Culture Food and Wine