First things first. We´ve all heard of the Panama Canal, the famous 81 km- long channel that connects the Atlantic to the Pacific, enabling container ships and freighters to shave thousands of kilometres off the otherwise long and dangerous journey between the two oceans. Tourists flock there to watch the huge ships go by and negotiate the giant Miraflores Locks. You can also enjoy a great view of ships entering the canal from the Puente de las Americas (Bridge of the Americas).

Let´s take a deeper look at the fascinating history of this incredible achievement, a concept that originated all the way back in the 16th century when Charles V, the Holy Roman Emperor, ordered a study to be done to determine whether it was possible to link the great oceans after the Spanish navigator, Vasco Nunez de Bilbao, discovered the Isthmus of Panama in 1513. It was decided that it was impossible and no serious attempt was made until the 1880´s when French company headed by Ferdinand de Lesseps, who developed Egypt´s Suez Canal, made the first attempt. Poor planning, engineering problems and tropical diseases sabotaged their plans and took the lives of thousands of workers. Excavating at sea level, with no locks, proved difficult. Gustav Eiffel (he of Eiffel Tower fame!) was hired to create a system of locks. After $260 million had been spent and 70 million cubic yards of earth had been excavated, De Lesseps went bankrupt amid a scandal of mismanagement and bankruptcy. The USA were keen to see the canal completed for economic as well as military reasons and in 1903, when Panama became independent, a treaty was signed allowing America to have 500 sq. miles and permanent ”sovereignty” over the canal, and once more the project got underway. It cost USD $ 375 million to build and USD $40 million to buy out the French assets.  They got their canal but more than 25,000 sacrificed their lives to malaria, yellow fever and other tropical diseases, as well as poor working conditions and accidents. 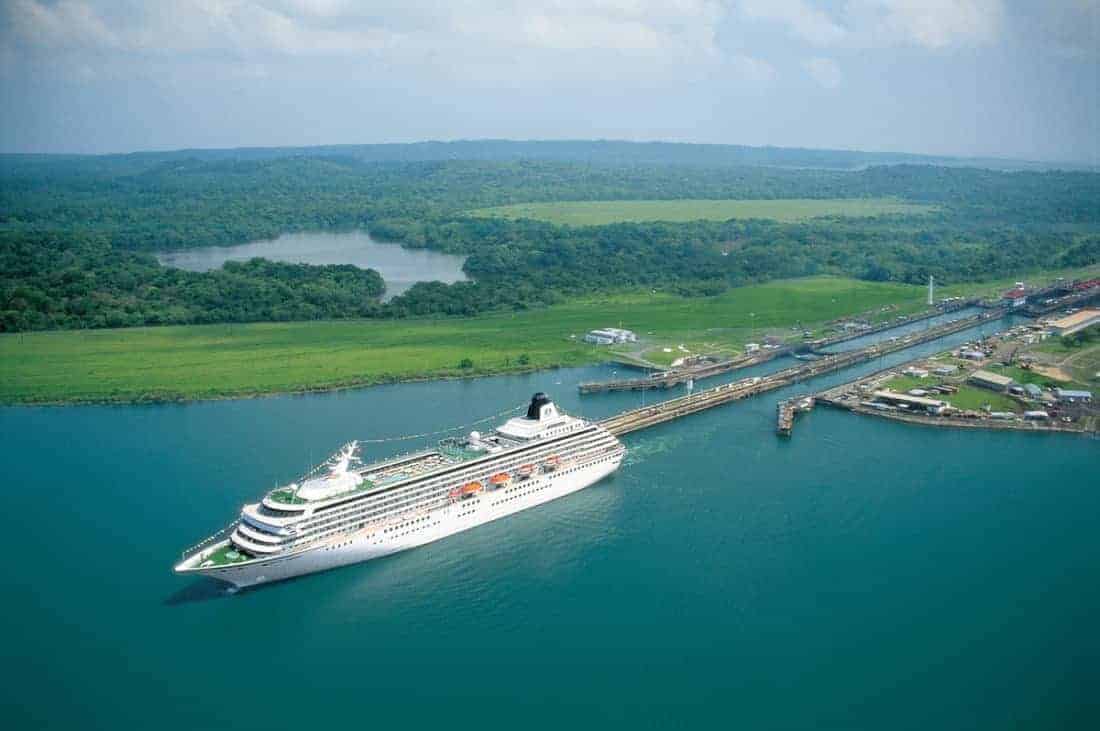 Today, the canal is 105 years old and between 13,000 – 14,000 ships use it each year; the majority are American followed by China, Chile, Japan, Colombia and South Korea plus many other nationalities. Each ship pays a transit toll based on its size and volume of cargo. For the longest, that can amount to as much as USD $450,000! The smallest fee ever paid was just 36 cents in 1928 when American adventurer, Richard Halliburton, swam the length of the canal! Today, USD $1.86 million in tolls is collected annually. It takes a ship 8 – 10 hours to pass through the system of locks that raises each ship 85 ft. above sea-level. A trained ship´s pilot takes over the controls of each vessel to guide it safely through the canal. In 2010, the 1 millionth vessel crossed the Panama Canal since its opening 1914. In 2015, a renovation project costing USD $5.25 million was completed enabling the canal to handle mega ships up to 110 ft. wide and 1,000 feet long, carrying up to 14,000 containers. This involved building new, larger locks and widening and deepening the channel. It is already too small for the mega-tankers of today!

But that is, of course, not all Panama has to offer.  There are also tropical beaches, jungle, beautiful islands, a buzzing capital, great restaurants, a fantastic seafood market, good local beer at the Rana Dorada Brewery, vibrant street art, and even a Jazz Festival in January. Many feel that Panama City is the most cosmopolitan city in Central America. The nightlife is lively with plenty of bars, clubs and restaurants, not to mention a casino, and shopping opportunities that will satisfy the most avid shopaholic! All the designer brands are here such as Gucci, Prada, Cartier, Hermes, Nike, Ralph Lauren, Micheal Kors, Carolina Hererra, and Chanel. Visitors may be surprised to see an ever-expanding skyline filled with towering skyscrapers that are worthy of any large US city. This is a total contrast to the old city, Casco Viejo, which is packed with lovely, tiny cobbled alleyways and architectural gems that are gradually being lovingly restored. This is now a UNESCO World Heritage Site and is well-worth an afternoon strolling around on a guided tour through the beautiful Plaza Indipendencia, the Plaza de Francia or the Inglesia de San Jose Church. Panama City has a good public transport system of buses and underground, as well as the “chicken buses” for short routes which are worth the ride just for the experience. There are also plenty of neighbourhood “fondas” where you can eat local food cheaply. Naturally, visitors should take the usual precautions as they would do in any big city as the contrast between the rich and poor is very evident here.

Beach lovers can head to one of the beaches with colourful, quirky names such as Wizard Beach or Red Frog Beach at Bocas del Toro – one of the ultimate Caribbean hot spots, where you can enjoy a variety of water sports or explore this tropical archipelago on one of the popular boat excursions. You can even kill two birds with one stone and combine a trip to Panama with a visit to Colombia, island -hopping on a boat trip through the San Blas Islands, departing from the village of Portobelo.

There is certainly plenty to see and do, whether you love the new or the old. Welcome to Panama!

Useful to know about Panama

The country is located in Central America with Costa Rica to the west and Colombia to the south-east. The Caribbean is to the north and the Pacific Ocean to the south. The largest city is Panama City which has 500,000 inhabitants.