The Republic of Guatemala is a Central American country located in the southern section of the North American continent, with the Pacific Ocean on one side and the Caribbean Sea on the other. It is bordered by Mexico to the north, Belize to the north-east and Honduras and El Salvador to the south-east.

Guatemala is a fascinating mix of the Old and the New Worlds – a blend of ancient Mayan and colonial Spanish cultures that combines archaeological and historical sites with natural scenic beauty.

Guatemala was, and still is, the homeland of the Mayan Indian culture, and there are three fascinating archaeological sites to explore here. The pyramids that date from 600 A.D. are among the most spectacular and highest in the world, still mystical to those who make the sometimes arduous journey.

The one that is perhaps the most accessible for visitors is Tikal (or”Place of Tongues/Voices”), one of the most popular attractions in Guatemala. From approx. 200 A.D. to 850 A.D., this city flourished as a religious, political and trading centre due to its favourable location between two rivers, one to west and the other to the east. Once home to over a quarter of a million people, only the ruins remain of this once bustling metropolis.  It was only rediscovered in 1848 after having lain abandoned in the jungle for centuries. It contains no less than 6 temple pyramids; the highest being around 65 m. Tourists can ascend by way of roots and wooden ladders if they dare. The site is surrounded by a large wildlife reserve – home to monkeys, parrots and macaws.

The most remote site of El Mirador, which dates from the 6th C. B.C., was the largest Mayan settlement of all and is the one which was excavated most recently. A trip to El Mirador, which is located deep in the Guatemalan jungle is not for the faint-hearted and requires a trek on foot of 5 days. But those who have been say it is worth it, and is an experience they will never forget.

The third Mayan site is Yaxha overlooking the blue/green waters of the lake below it. It once housed 500 buildings and 9 temple pyramids. 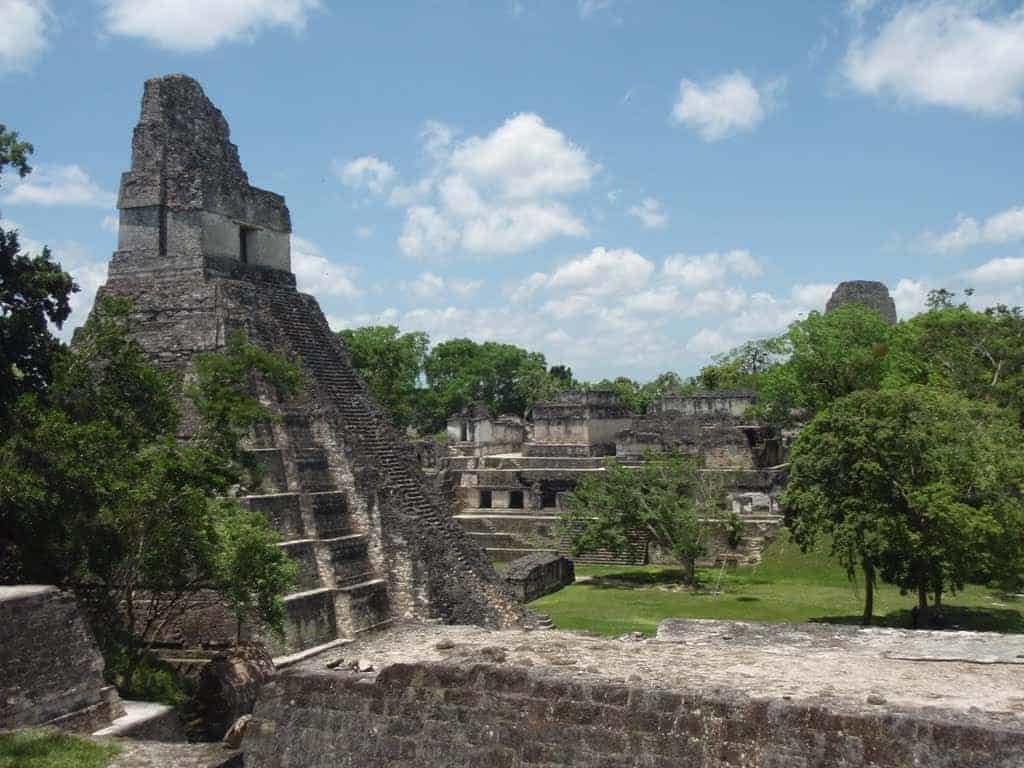 Guatemala, The Ruins of El Tikal

Is this the world´s most beautiful lake?

And while we´re on the subject of lakes, one that has been described as the “most beautiful lake in the world” by the writer, Aldous Huxley, is Lake Attilan, situated in the Guatemalan highlands. You can even scuba dive if you choose, in this 400-meter deep crater lake that was created 85,000 years ago following a gigantic volcanic explosion. Along the coast you´ll find many picturesque country villages that are worth exploring, too. Another lovely lake is the Laguna Chicabal – the sacred lake in the cloud forest.

Read more about the Mayan Indians.

Volcanoes are still a force to be reckoned with in Guatemala. Volcano Pacaya last erupted as recently as 2010. For real volcano aficionados, a trip to Quetzahenango may be of interest. This beautiful city is situated between no fewer than 3 volcanoes, and you can take a dip in the nearby Fuentas Georginas natural sulphur springs. You can also take an excursion to local Mayan villages from here.

If you´re a fan of colonial Spanish architecture, don´t miss the former capital city, Antigua, a veritable jewel that was destroyed by a massive earthquake in 1773, but has been reborn. If you can, try and get there for holy week when the streets are carpeted in flowers and the city comes alive with parades, floats and festivities.

Somewhere you shouldn’t miss is Chichicastenxo (or “Chichi” as the locals call it), 2 – 3 hours south of Guatemala City. This may just be the most colourful and vibrant native market in the whole of the Americas and is the shopping destination to head for in Guatemala! Here you can haggle for textiles, woven fabrics, woodcrafts, masks, traditional clothing and just about anything else you can think of. This is the city of festivals, feasts and fiestas – and everybody´s welcome!

And while you´re there, don´t miss a ride on a “chicken bus” – one of the old American school buses that have been painted in psychedelic colours as bright as the traditional clothes the Guatemalans love to wear, and given a new lease of life. Inside is just as exuberant with posters, Christmas lights, pom-poms and whatever else they find to turn the trip into a fun-filled experience.  You might say they are high on experience, but low on comfort, and perhaps not for the faint-hearted as often the driving skills on display are as wild as the décor. The schedule is whenever the driver feels like it and the fare is what they can get away with – so be sure not to fall victim to the “gringo” tax. Pay what the locals pay.

Check out your local tour operators/travel agents for more information on how to get there and details of guided tours.

Warning: The Zika Virus is spread by mosquitoes and is dangerous for pregnant women, but is not found at altitudes above 1,800 – 2,000 meters. The majority of Guatemala lies at approx. this altitude. See more information here: The Zika situation in Guatemala

The trip through the jungle to El Mirador. On adventure in Guatemala

El Mirador, luxury beach days or a trip through the jungle? Do you have 5 days you don’t know what to use for? So here’s a suggestion. You probably just have to give transport time for air transport with lay-over to Guatemala, but we guarantee you an experience a little beyond the bike ride to the nearest baker. So maybe 14 days is better? el-mirador-2-guatemala   Miracle el Mirador Here is the story of El Mirador, one of Maya’s most important testimonies. First, you go to Guatemala, then sign up for a small jungle hike of 5 days through the jungle to…