Costa Rica is a model country for Central America, and in many ways, for the rest of the world as well in some important ways. It is one of the oldest democracies in the world (over 100 years) that still functions well, is a safe country to travel in, and is a country that has really integrated ecology into the general way of life. It also protects its nature and wildlife zealously.
The country is ranked 30th out of 180 countries in the respected Environmental Performance Index in which Iceland is no. 1, Switzerland is no. 2 and Denmark is no. 35. As far back as 1502, Christopher Columbus called it “The Rich Country”. Today, it is the richest country in Central America, a strong economy that prospered through the export of coffee, bananas, sugar and meat – and, more recently, electronics. The country abolished its army in 1948 and the money that is saved by not having armed forces is invested in improving the living standard of its people. Now, there´s a smart idea…

They must be doing something right as the people of the Nicoy Peninsula, among others in the country, are some of the longest-living people in the world. It´s a peaceful country, multi-cultural and multi-lingual whose people are, descended from a number of indigenous tribes as well as the  Africans, Chinese and Italians who came later. This makes for a wonderfully rich cultural heritage which is expressed in the many festivals, the arts and crafts, music, dances, ceramics and gastronomy. Here, you can try everything from home cooking to international haute cuisine. It is considered to be one of the most bio-diverse regions in the world. You can visit rural communities, cooperatives, ecological reserves and areas of cultural interest.  The country´s geography is as diverse as its people: so whether you are looking for sun and tropical beaches, rain forests and nature reserves, or cities with monuments and museums, you´ll find it here. Up to 5-6% of all animal species in the world are found only here.

With less than 200 km from the Pacific Ocean to the Caribbean Sea, it´s also a paradise for divers. Here, you can view hammerhead sharks, humpback whales, dolphins and many others species of marine life up close. Some 550 km. off the coast of Costa Rica is Coco Island National Park which Jacques Cousteau called “the most beautiful island in the world”. And he should know…

Creep down to the beach at night to watch the amazing spectacle of thousands of sea turtles crawling ashore to lay their eggs en masse. Not to be outdone by the thousands of frogs and toads who, after the first showers of the rainy season stage impromptu concerts in each pool, puddle and wet area they can find, some clad in elegant, bright colours! Natural concerts and they´re free! “Singing in the Rain”, you might say.

Still looking for something unique to complete your trip? To really see the forest, leaving minimal impact on its unique environment, why not take a canopy tour and slide along the cables suspended 100 ft. above the forest floor from tree to tree – the closest you´ll ever get to being a monkey! Or hike a volcano. Costa Rica is after all part of the dramatically-named “Pacific Ring of Fire”.

Looking to relax? There are plenty of other activities to choose from such as golfing or windsurfing.

These are just some of the reasons to visit this beautiful country with its rich diversity of wildlife and stunning scenery. A peaceful country whose national symbol is the yoke and ox-cart. And what´s more, they have the world´s biggest one which is not only a mode of transport, but also a work of art. Decorated by Costa Rican artists using hundreds of gallons of paint, it is colourful and creative… and yes, peaceful. Perhaps that sums up this country´s appeal.

Costa Rica is a country in Central America. It borders Nicaragua in the north, Panama in the south-east, the Pacific Ocean in the west, the Caribbean in the east and Ecuador off the southern part of Coco Island. 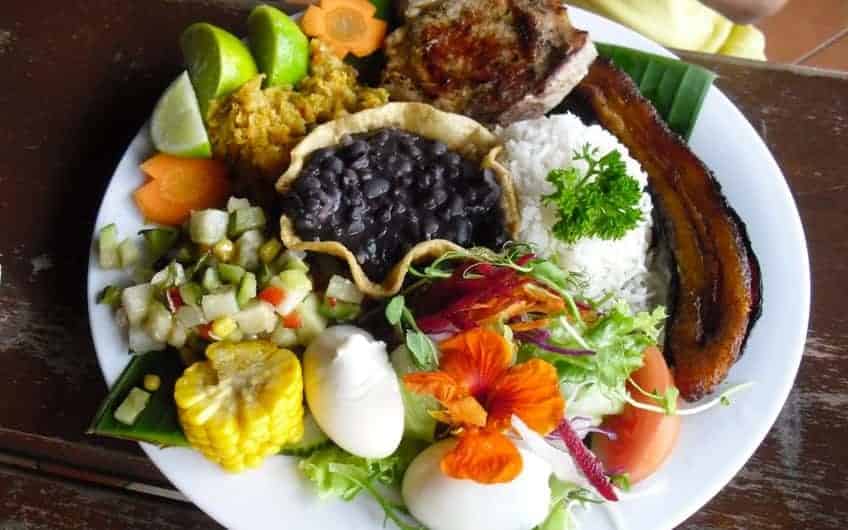 What do you eat in Costa Rica? Black beans and rice in a Casado from Costa Rica! The ultimate health food? Costa Rican cuisine is really healthy, delicious, and varied. Costa Rica is more than dazzling white beaches and deep jungles. It is also a proud culture and food tradition that is delicious, healthy, and "easy on the eyes". In short, it is worth putting into the subject, but a little warning you will probably be hungry! Costa Rica's gastronomic tradition borrows from the original tribes of Central America, the Spanish influence, and from African cuisine. It is food...